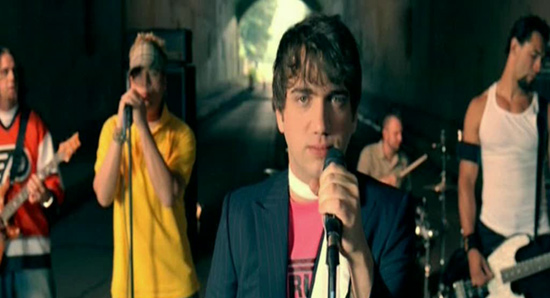 A band which has seriously gotten far less credit then they honestly deserve, The Bloodhound Gang is an alternative rock band from Quakerstown, PA. Their songs typically have humorous and off-beat, often satirical (see: nasty, and probably not safe for your place of employement) lyrics. The group formed in 1992. Bloodhound Gang has sold a combined total of more than 6 million albums, which is kind of a shame considering their music really ought to appeal to a much wider audience. As Talent goes, there really isn’t anything off putting or bad about TBG, other than their musicianship varies a great deal from song to song. This alone ought to make them far more popular than they are.

Quiz: This song is all about which of the following:

A song we can all relate to.

Not a whole lot of mincing words here, ya know?

Ya know, these guys are the masters at forced innuendo.

That classic tune where even your mom knows the chorus.

Listen close. All the Germans in the crowd say: “Blatthaunt Gahng!” Funny.

If you can clearly make fun of crappy 80’s synth rock as perfect as these guys, well, then I guess you’d be really good, too.

2. The Ballad of Chasey Lain

1. I Wish I Was Queer So I Could Get Chicks

Ever wished you, too, could pose as a queer to acquire women? Oh, just me then.