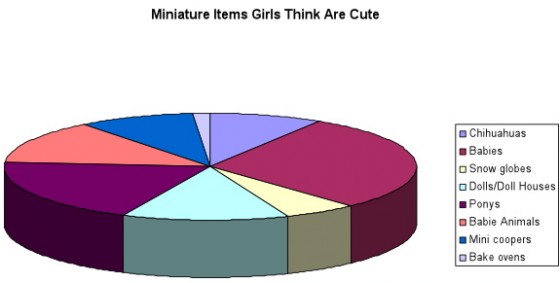 In order to cram all of the things a girl’s cuteness radar is wrong about, it was imperative to keep the itemized list titles somewhat broad in nature. Anything Miniature encompasses a great deal of not cute things that women go crazy for. It’s hard to imagine what girls think is so cute about a baby. They shit everywhere, cost a lot of money, and make really shitty drinking partners. Sounds awesome. Of course, the downside of a vague category is the inevitable exception or two. The two areas this rule does not apply to are cocks and jewelry.

There are any number of devastating, sex-preventing bombs a women can drop on your average unsuspecting male. Expressions like, “I’m on my period,” “I can’t leave my friends,” “I don’t do that,” and “‘Mad About You’ is on” are just a few of them. But the worst thing she can say to you is, “I’m cutting my hair short.” It’s a toss up between that and “It’s your baby.” Either way they both leave you with that feeling deep in your stomach. You know, the one where you briefly consider killing her. Anyways, I don’t know why the homosexuals on those fashion shows have been telling her short hair is in right now, or is going to be in. Bullshit, short hair is never in. There is nothing cute about sexual ambiguity. The last thing I want is the girl I’m banging to have the same haircut as Matt Damon In “Rounders.”

Girls will look for any excuse to dress up in 80s attire they consider cute. Something about shoulder pads, spandex, and neon colors just gets them in such a craze. Plus, there are leg warmers and arms warmers and all other sorts of warmers. The proverbial straw that breaks the camel’s back, though, is without a doubt the crunchy hair. None of this stuff is cute, but girls seem to think it is. It might have something to do with overweight girls thinking they’ll being able to hide it by wearing loose-fitting sweatshirts with the collars cut.

It’s not so much that the big sunglasses aren’t sexy as much as it is girls using it as a crutch to aide their mediocre looks, like a toupee for their face. They’ve got to know that at some point, the glasses are going to have to come off to expose their true form. And they inevitably do.

Heyyyyyyyy, Hiiiiiiiiiiiiii, Happy Birthdayyyyyyy, Obvi, OMG, Kewl, :) , . These are just a few of the literary weapons women have in their arsenal to try to appear cute. Well, Sorryyyyyyy, not cute.

5
Dancing on the Bar

I’m not going to stand here and pretend to tell you that I don’t enjoy watching sexy girls dance. As a matter of fact, I am pretty sure that’s the reason I cut holes in my pockets. But after 30 minutes of desperately trying to get my penis the opportunity to tickle some meat curtains with unanimous rejections, I am going to need a drink. And it’s impossible for me to get said drink with some gross skank stomping around the bar like Peewee Herman thinking she works in “Coyote Ugly.” Are you going to jump off that bar and grind on me? Are you going to stumble out of this bar and make out with me on that bench over there? Are you going to go down into the subway with me and wait 30 minutes for the train to come because I’m too cheap to pay for a cab? No? Then stop shaking your shit in my face, I find it both very distracting and very not cute. Note: If the girl is dancing like Peewee Herman while the song “Tequila” is playing, you grab that girl that girl off the bar and marry her as soon as possible. Those girls only come around once in a lifetime.

For the top 4 things girls thing are cute, but aren’t, check out The Ultimate Hatelist.