20 Songs to Kill Someone To 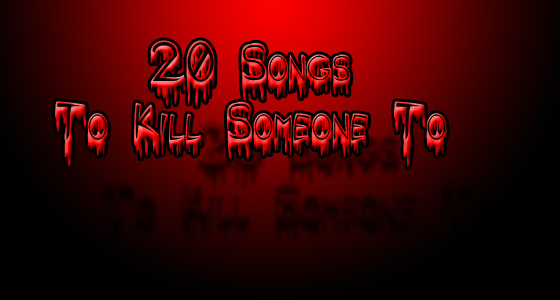 There is an appropriate soundtrack for every murder. While each killing is different and has it’s own uniqueness, the Gunaxin writers put our heads together and came up with 20 good songs to kill someone to. There are many more songs about killing, but chances are, one of these songs will work for the average murder (if vampires were real we’d have selected “Cry Little Sister” from The Lost Boys). Let’s also not confuse this list with songs to fight to, songs about suicide, power ballads to make out to, or gay songs. Know more? Name them in the comments and call us retarded for missing them.

Notice Ice-T’s disclaimer to this song.

This next track is dedicated to some personal friends of mine, the L.A.P.D. For every cop that has ever take an advantage off somebody, beat him down or hurt him, because they got long hair, listen to the wrong kind of music, bronde color, whatever they thought was the reason to do it.
For every one of those fuckin’ police, I’d like to take a pig out here in this parking lot and shoot them in their motherfuckin’ face.

Some people will say what about “Kill You”? That one’s good too but this song is anger on a whole different level. Also “’97 Bonnie & Clyde” works, as does “Stan,” in which the motive – a deranged fan – is much different than the other songs here.

Ha! Go ahead yell!
Here I’ll scream with you!
AH SOMEBODY HELP!
Don’t you get it bitch, no one can hear you?
Now shut the fuck up and get what’s comin to you
You were supposed to love me
{*Kim choking*}
NOW BLEED! BITCH BLEED!
BLEED! BITCH BLEED! BLEED!

This is probably the song that got Pac killed. A soundtrack to his own death.

First off, fuck your bitch and the click you claim
West side when we ride come equipped with game
You claim to be a player but I fucked your wife
We bust on Bad Boy niggaz fucked for life
Plus Puffy tryin ta see me weak hearts I rip
Biggie Smalls and Junior M.A.F.I.A. some mark ass bitches

Looking Down The Barrel of a Gun
Beastie Boys

The soundtrack to every South Central Los Angeles murder.

Straight outta Compton, crazy motherfucker named Ice Cube
From the gang called Niggaz With Attitudes
When I’m called off, I got a sawed off
Squeeze the trigger, and bodies are hauled off

How I Could Just Kill a Man
Cypress Hill

Didn’t have to blast him, but I did anyway…
Hahaha… that young punk had to pay.
So I just killed a man!

Now the funeral is over and all the tears are dried up
Niggas hangin deep on the cut gettin fired up
Lookin for the nigga who pulled his pistol on my homie
An eye for an eye, so now your life is what you owe me

Who’s afraid of the dark?
Responsible for the murders in the park
When I bark, they hear the boom, but you see the spark
And I seen the part of your head which used to be your face
Was replaced by nothin’ for bluffin’, what a waste

You’d fight and you were right –
but, they were just too strong.
They’d stick it in your face
and let you smell what they consider wrong.
That’s why I say “Hey man, nice shot.”

I Want To Kill You
GG Allin

Perhaps the most evil musician ever, GG Allin died in 1993 of a heroin overdose, sparing us from more of this crap:

Killing in the Name
Rage Against the Machine

Maybe it’s just me but I hear this as an anthem to kill Klansmen. I know I’m way off but it’s just the soundtrack, not the message, remember?

Some of those that work forces
are the same that burn crosses.

Here is one of several Slayer songs that fits this list, this one being about the Holocaust. The lyrics are too grisly to show. I’m not quite sure if this song is meant as a history lesson or as something to actually jam to.

A song from the point of view of a serial killer.

So now that it’s over can’t we just say goodbye?
I’d like to move on and make the most of the night
Maybe a kiss before I leave you this way
Your lips are so cold I don’t know what else to say

A song about shooting your old lady. An obvious choice for this list.

I’m going down to shoot my old lady
You know, I’ve caught her messin’ around with another man
And that ain’t too cool

This song goes on the list only because it’s probably what the Manson Family were listening to while committing their Hollywood murders.

Because Alex listened to it in A Clockwork Orange, of course!

Music to calm serial killer Hannibal Lecter after committing murder in Silence of the Lambs.

Editor’s Note: Like television networks and film studios that feature murders in their content, Gunaxin does not endorse killing anyone.