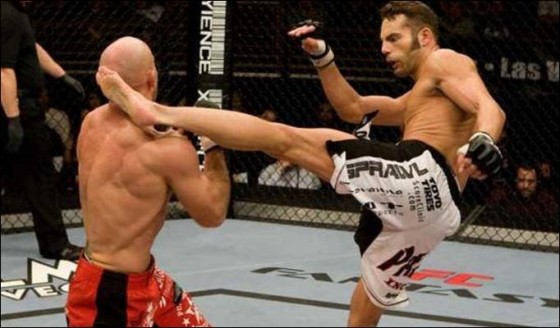 I initially had this list 35 finishes long, with fights taking place on five continents. We ended up with 24, only on three continents… but it’s all good. Why 24? 24 hours in the day so you can watch one vicious knockout every hour). Also, the UFC “season” ended with UFC 124. It just seemed fitting. These are in chronological order, if only because I couldn’t separate the carnage from one another.

Without any further ado…a look at some of the most crippling knockouts of 2010!

This was Hazelett’s first fight in 13 months after he blew his knee out, and after Karo Parisyan had one of his patented meltdowns and pulled out of a fight with Hazelett the day before it was schedled to take place. Hazelett is a Jiu-Jitsu ace and was thrown in there with Paul Daley, one of the most electric strikers in the welterweight division.

If he had been able to get it to the ground, it would probably have been a quick night for Daley. Daley was coming off a stunning UFC debut in September, where he won via TKO of the well-regarded Martin Kampmann. Instead of trying to take the fight to the ground, Hazelett decided to stand with Daley.

That decision didn’t end well for him.

This was Manhoef’s Strikeforce debut, coming over from DREAM as a part of the talent exchange between the two companies. Worth noting: Manhoef normally fights in a leather skirt in Japan and Europe. That’s not allowed here in the States.

Anywho, he was matched up with Robbie Lawler, a former UFC hot prospect whose career led him to smaller shows after losing three out of four to end his UFC tenure. Matching him up with Manhoef, a pure striker who wouldn’t know how to armbar an opponent if there was a Gracie tutorial going on ten feet away, seemed like a fight destined for fireworks. It definitely was.

Ryan Bader won the light heavyweight portion of Season Nine of the Ultimate Fighter, an undefeated prospect on a meteoric rise.

Jardine would be the first real test of his career, a man who had beaten Chuck Liddell and Forrest Griffin, but had lost to Houston Alexander and Stephan Bonnar.

In Jardine’s last fight, he was knocked out in 95 seconds. Bader wouldn’t top that mark, but he’d make sure there was no question who the winner of the fight was.

Much like Bader, Velasquez was an undefeated prospect who the UFC was looking to give a big test to in order to insure the new kid on the block was for real. Unlike Bader, who got a gatekeeper in Jardine, Velasquez drew Antonio Rodrigo Nogueira, one of the greatest MMA fighters of all time.

After a huge right uppercut and a couple of followup punches, fans weren’t wondering whether or not Velasquez was for real, but whether or not he had killed the legend of Nogueira.

Our first entry (but certainly not last) from the now-defunct WEC joins the list. Casimir is a journeyman, who was making his WEC debut in this fight. Lamas is a guy who can be a little boring at times and is prone to the decision. He’s really not known for his striking…until this night, of course.

The man now known for his Matrix kick off the cage, Anthony Pettis was kicking guys in the face long before that fateful night in December. The victim on this evening was Danny Castillo, a training partner of WEC poster child Urijah Faber. Both men have bright futures, but it’s worth noting Castillo has lost to every above average fighter he’s faced.

This would be no exception.

I really don’t think there is anything more beautiful than a perfectly executed kick to the face.

This is our first Japanese fight on the list, from Sengoku, the #2 promotion in Japan (behind DREAM, which only has one entry on the list).

Marlon Sandro is the current Sengoku featherweight champion, a title he’d earn a shot at with this win. Sandro had one loss in his career, via a controversial split decision to current (and former) UFC fighter Michihiro Omigawa. Sandro’s last four wins have come in a combined 3:39.

This win accounted for… get this… NINE of those seconds.

The Japanese man in the green hoodie and glasses who looks like he just shit his pants after the win is Masanori Kanehara, then the featherweight champion. We’ll see a little more of him later.

John Howard vs Daniel Roberts
UFC on Versus 1

This seems like a nothing fight between two guys going nowhere on the UFC undercard. And quite frankly, it is.

But man, the finish is certainly something to be seen, with Howard dropping a bomb like Hiroshima onto the face of Roberts.

Our only entry from DREAM on the list features Cole Escovedo, a former WEC stud who missed nearly three years of fighting due to a serious staph infection. He got a trip to Japan to face Maeda, a former WEC fighter who once fought Miguel Torres for the bantamweight championship.

That was probably the peak of his career, and this could be at the bottom of the barrel.

Former Ultimate Fighter Season Five competitor Manny Gamburyan dropped down to his natural weight of 145 pounds after a couple of tough losses in the UFC and started running through competition in the WEC. Former champion Mike Brown would be a tough test.

We later found out that Brown was going through some personal issues, and that his head wasn’t in the game for this fight. That makes sense when you look at what happens.

“Welcome to the Machida era” – Joe Rogan, at UFC 98, when Lyoto Machida brutally knocked out Rashad Evans to claim the UFC light heavyweight title. Machida’s first defense was Rua in October, and he won a very controversial decision.

Rua was granted an immediate rematch in Montreal, and the man they call Shogun wasn’t going to let it go to the judges again.

Todd Duffee had the UFC hype train behind him. In his UFC debut, he knocked out Tim Hague in a UFC-record seven seconds. He was on the cover of Muscle & Fitness, and the chiseled specimen was crowned the next big UFC star, given Russow as a nice little tuneup fight to boost his star power.

After dominating the first two rounds, Russow connected with one shot, and that was all he needed to end Duffee’s superstar run. The fighter was cut by the UFC this summer and will face K-1 World Grand Prix champion Alistair Overeem in New Year’s Eve in Japan.

I’m sure that will end well for him.

Guillard has had a very checkered UFC career, testing positive for cocaine, getting into shouting matches with his opponents at weigh-ins and post-fight, and being an overall malcontent.

However, since getting into that shouting match with Rich Clementi after their fight at UFC 79, Guillard has won six of seven fights. This was win five in that streak, and it comes in quite a unique way: a knee to the body!

This fight was supposed to be Tito Ortiz against Chuck Liddell as the two coached against each other on Season 11 of the Ultimate Fighter. Ortiz bailed with a week left in filming, replaced by Franklin who, at this point in his career, is a much better fighter.

For most of the first round, Liddell looked like the fighter fans had fallen in love with as the UFC rose to prominence in the middle part of this decade. Unfortunately, his chin just isn’t there anymore.

I talked about Sandro getting the title shot against Kanehara earlier, and how downright terrified Kanehara looked.

Well, he had a right to be.

He also apparently didn’t watch any tape of the first fight, because Sandro knocks him out with the same punch he used to nearly kill Kanomata.

Eddie Wineland vs Will Campuzano
WEC 49

This is a fantastic fight between a guy in Wineland, looking to get back to the form that saw him hold the WEC bantamweight title, and Campuzano, who is desperately looking for that big win to get his name on the mind of the casual fans.

Wineland had another vicious knockout on the final WEC show, but video still hasn’t surfaced unfortunately.

Gerald Harris got his shot in the UFC by calling into a radio show and begging Dana White for a shot. He got it, and delivered in spades, winning his first three fights in the organization.

None was more impressive than this win over UFC newcomer Branch, overmatched all night long. This ending was so vicious, it ended up on SportsCenter.

This knockout was just as vicious as the Harris incident with none of the pub.

There are a couple of reasons behind this.

First, it took place in Strikeforce, not the UFC. Secondly, it was on Showtime, not a big cable network like Spike. And finally, and I don’t want to sound sexist, but it’s women’s MMA. Women’s MMA really hasn’t caught on in the mainstream side from Gina Carano, who hasn’t fought in nearly a year and a half.

Despite all that, Kaufman really brought the pain in this one.

Who in the hell are these guys?

Thompson is a career journeyman who’s never been able to find a home. Okuno is a guy who’s toiled away on smaller Japanese shows for a few years and who hasn’t really gotten his name out there.

This knockout got his name out there a little bit, though.

Former Ultimate Fighter cast member George Roop dropped to his natural weight of 145 pounds in order to stay employed by Zuffa. After a loss and a draw (in a fight he should have won, though), Roop desperately needed a win. He was matched up with Chan Sung Jung, who won over the hearts and minds of MMA fans with a classic scrap against Leonard Garcia on the WEC’s prelim special prior to WEC 48.

One guy got what they wanted, and one got sent back to the drawing board.

Daley again. This time, he’s matched up against “Hands of Steel” Scott Smith. Smith can take a shot like it’s no one’s business, so imagine how much everyone freaked out when Daley dropped him with one brutal shot to the face.

The way Smith’s body stiffened up and just fell to the canvas is one of the more disturbing things you’ll see in a knockout.

Lawler’s opponent on Strikeforce’s year-end show was veteran Matt Lindland. Lindland was savagely knocked out by Vitor Belfort in 2009, and everyone assumed he wouldn’t be fighting any pure strikers.

Well, he was matched up with Lawler…and his jaw is still glass.

This one looked like a mismatch on paper. Paixao was the decorated submission ace while Garza was a guy who couldn’t even get into the Ultimate Fighter house (on the most recent season, no less). This was the first featherweight fight in UFC history, and one that’s going to be remembered for awhile.

We close our list with a pair of former Ultimate Fighter champions. Mac Danzig took on Joe Stevenson in Canada. Both men were coming off losses and needed a win… badly. Stevenson was wild and throwing like he had nothing to lose. Danzig patiently looked on, and picked his spot.

Sometimes, that’s all you need to do to get the victory.