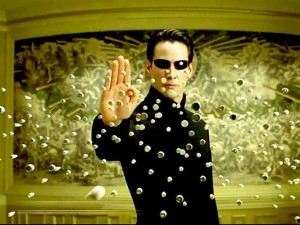 A friend of mine loves watching movies that star Keanu Reeves. No matter how bad the plot, no matter how many rotten tomatoes are thrown at the movie because of Keanu’s wrong-doing, the friend faithfully goes to the movie theater to watch Keanu play the same typecast role that he’s always played throughout his career. His dialogue and on-screen emotions rarely match, the depth of the characters he takes on are non-existent and his acting is best described as atrocious. Still, I can see why you’d want to watch a Keanu movie. Despite knowing what the horrifying outcome will be, people love to watch train wrecks. It’s a sense of morbid curiosity that drives each of us to ‘wait out’ the full 2 hours to see exactly what we knew was going to happen.

So it got me thinking. What movies starring Keanu Reeves are worth watching? Surely he must have acted well in at least one decent movie. Otherwise, why would any Hollywood movie director choose to cast Keanu? The bad news is – there’s really only one movie worth watching and that was the first of the Matrix series: The Matrix. One movie may be all there is that’s worth watching, but there are FOUR – count them with me, 1 ha ha ha, 2 ha ha ha, 3 ha ha ha, 4 ha ha ha bearable movies you could watch if you ever fancy for some really bad Keanu.

So let’s count them down: 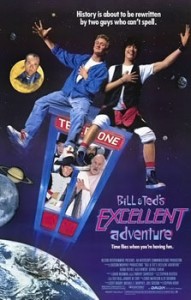 Moving up the list of bearable movies is Bill & Ted’s Excellent Adventure. Keanu, who had been to this point an unknown model / actor was thrown into the spotlight among Hollywood’s worst actors thanks to this shallow and brain-dead role (shocking isn’t it!?). Filled with intellectually stimulating lines like, “whoaaa…” and “Rock on, Ted!”, Alex Winter and Keanu Reeves star as two teenage dummies Bill and Ted. They dream together of starting a rock band called the “Wyld Stallions”. Unfortunately, they are on the verge of failing out of school and if they do not pass their upcoming history report, they will be separated as a result of Ted’s father sending him to military school. It gets better as comedic legend George Carlin travels from the future into the past using a telephone booth to ensure Bill & Ted pass their history report. What Bill and Ted don’t know is that they must stay together to save the future. So off goes Bill & Ted in the time traveling phone booth to gather up historical figures for their history report. 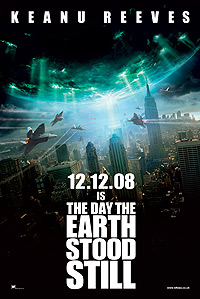 As if you couldn’t predict what kind of role he’d play in this movie, Keanu takes on the role of an emotionless (surprise!) alien messenger in human form named Klaatu. Klaatu has been sent to mother earth to determine if the human race is worth saving or whether him and his alien friends must destroy them in order to save earth from their savagery and destructive ways. Klaatu befriends Jennifer Connelly, a famed astrobiologist, and is ultimately convinced by her that the humans deserve a chance because it is only at the precipice that one can invoke the change that one knows must happen. It’s a bearable film which relied heavily on the visual and sound effects to make up for its incoherent story base. It’s also a movie that’s littered with messages that would invoke tree huggers to unite and wail in a forest. 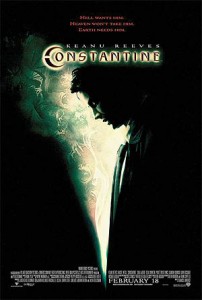 After making some really bad flicks such as The Replacements (2000), The Watcher (2000), and Sweet November (2001) (gag in your mouth yet?), Keanu needed a movie to boost him back into the public spotlight. He got exactly that by starring as supernatural detective and exorcist John Constantine whose soul is sentenced to hell. He deports demons to get on good terms with God but God wants self-sacrifice. Female police detective, Angela Dodson teams up with Constantine to investigate the suicide-like death of her twin sister. Although not a great movie by most standards, it did gross a good amount of money as people watched in curiosity as to how angels and demons would be interpreted by the Hollywood studios. 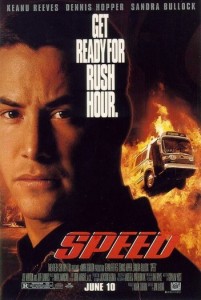 The first movie to give Keanu Reeves a gun and some action scenes. The movie takes place in Los Angeles and focuses on SWAT team explosive expert Jack Traven who tries to arrest an insane bomber & extortionist. After the bomber escapes, he sets a bomb on a city bus which Traven boards and must keep moving above 50 miles per hour to prevent the bomb from exploding. The movie stars Keanu Reeves, Dennis Hopper and Sandra Bullock. Not a bad movie, so I can’t slam Keanu. 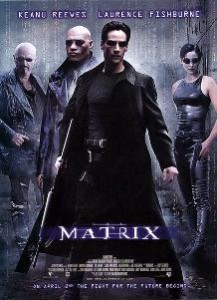 The 1999 science fiction hit, The Matrix, solidified Keanu Reeves’s place as an international superstar. Arguably the best movie Keanu has been in,the movie describes a future in which reality perceived by humans is actually the Matrix: a simulated reality created by machines in order to pacify and subdue the human population while their bodies’ heat and brain electrical activity are harvested as an energy source by the machines. The story is an interesting one, but the movie’s effects are what sold tickets. From stopping bullets with his hand to an edge of your seat action scene which consisted of Keanu Reeves shooting his way through a heavily guarded building to rescue Laurence Fishburne (Morpheus), The Matrix popularized the use of a visual effect known as “bullet time”, which allows the viewer to explore a moment progressing in slow-motion as the camera appears to orbit around the scene at normal speed. Also, the movie made use of the “time-slice” effect in which characters and objects are frozen in time as the camera pans around the scene in a 360 deg fashion.

So there you have it. From Dud to Stud – the Top 5 movies that you should watch if you fancy some sexy Keanu Reeves time on a rainy and cold weekend.