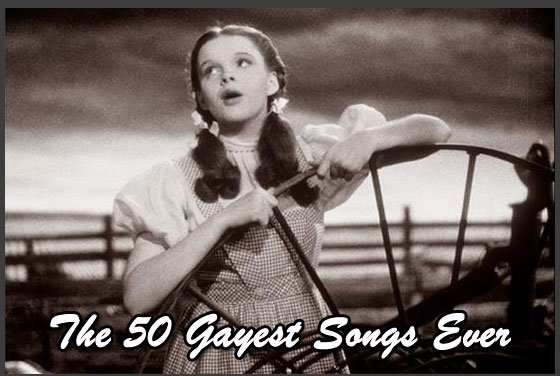 Visit TopGaySongs.com for more on this topic.

Heterosexual guys like myself are so insecure that whenever a ‘gay’ list comes out (top gay cars, top gay TV shows, top gay favorite actresses, etc.), they anxiously look at that list and try to prove they are not gay by acknowledging that they do not like those very same things that the gays like. Stupid? Yes. Homophobic? Sure, but that’s just the way it is. In fact, the opposite holds true. I hear you lose your gay identity card if you’re not a fan of shows like Queer as Folk.

Let’s take the test with music. Last year an Australian website tallied the votes of thousands of Aussies to compile a definitive list of the 50 Gayest Songs of All Time. So, whether you are homosexual or heterosexual, this list will tell you something about yourself. Count the songs that you own. My results are at the bottom. And if you want to complete your collection, click on the link and buy the mp3 from Amazon.

I have five six, plus two others by singers who covered those songs. But not anymore.

Are you a cross-dresser? See if you own the best songs about cross-dressing. A lesbian? Then see the list of top lesbian songs.