NFL coaches often say that this week is the hardest time of the year for them, as NFL rosters are cut down to 53 players. For General Managers though, this can be the best time, as quality players are released who can help their teams. Whether due to injury, a slow developing draft pick, or a failure to pick up a free agent before camp, every team has holes to fill. For the players, they can often find themselves going from the unemployment line to the starting lineup for a contender.

With that in mind, here are the best players out on the market (in no particular order), and a prediction of where they will go. 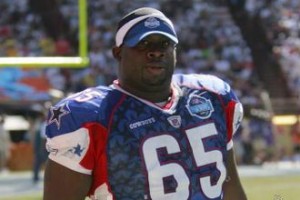 The Cowboys released their Pro Bowl center after a contract dispute this week, planning to go with two rookies and a second year player on the interior of their line. While Tony Romo and Felix Jones have to be less then thrilled with this development, another team will happily sign him. After struggling through a pair of position changes in his first few years, Gurode won the starting center job in 2006. Since then he has been the anchor for the Dallas line, making five straight Pro Bowls and two All Pro teams. With no major injury questions and the ability to play all three interior positions, Gurode will be in high demand.

Our Guess: New England is a Super Bowl contender badly in need of help along their offensive line. Tom Brady is the heart of that team, and keeping him in one piece is going to be well worth the investment it will take to bring in Gurode. Added bonus, getting to watch the first meeting as teammates between Albert Haynesworth and Gurode since Haynesworth famously stomped on his head in 2006. 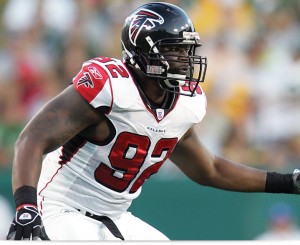 A surprising cut from the Falcons, Davis appears to have been a purely financial casualty after signing a four year deal in 2009. Davis rotated in as the third Defensive End in 2010, recording one sack and one interception for a playoff bound Atlanta. While he won’t fill the stat line, he can occupy blockers and serve as a valuable run stopper. Just 28, and having been a part time player for his whole career, Davis should be fresh and motivated to perform.

Our Guess: Green Bay is loaded for bear in their attempt to repeat as Super Bowl Champions, but after losing Cullen Jenkins to the Eagles as a free agent they could use another experienced body along the defensive line. 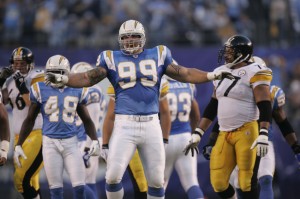 Another financial cut by the Cowboys, Olshansky was let go by a team he signed a four year deal with in 2009. While his play isn’t what it once was (Olshansky was merely a backup for the Cowboys this preseason), Olshansky is a proven run stopping end in a 3-4 defense. Known for his strong arms, Olshansky is able to occupy blockers to free up his linebackers to make plays. A nine year vet, there has never been a doubt about his commitment to staying in shape.

Our Guess: In the wide open and pitiful NFC West, San Francisco believes they have a chance to compete immediately for a playoff spot. With Isaac Sopoaga moving inside to NT, there is almost no depth or experience to serve as a bookend to Justin Smith. A big body like Olshansky will help keep the pressure on the line and free up Smith and an athletic linebacking corp to pressure opposing passers. 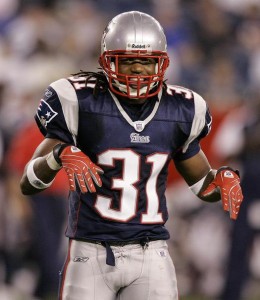 Arguably the most talented player cut, Meriweather is coming off back to back Pro Bowl seasons. This is the second season in a row that a poor preseason has hurt the freelancing safety, as he lost his starting position last year coming out of camp. This year he was relegated to the bottom of the depth chart, and released with one year and $1.65 Million left on his contract. If he can learn to play within a system, Meriweather, a fifth year pro, should be an instant upgrade to his new team. Expect him to sign for a two or three year contract early in the week.

Our Guess: While there are probably a dozen teams that have a need at safety, the New York Jets makes the most sense. Not only are they a contender, but Rex Ryan has worked with freelancing safeties before, coaching Ed Reed in Baltimore. Add in the fact that the Jets love signing former Patriots and that Meriweather would probably enjoy playing the Pats twice a year and it’s hard to pick a better match. 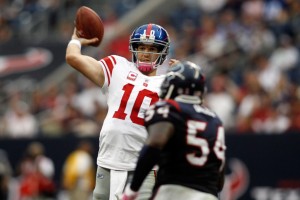 The Rams let Diles go only a month after signing him as a free agent. A run stopping outside linebacker, Diles had 82 tackles last year for Houston while battling through concussion type symptoms. While he was unable to beat out fellow free agent signing Ben Leber for a job in St. Louis, the 26 year old Diles could provide depth at OLB in a 4-3 defense, and even start in a pinch.

Our Guess: Philadelphia is ready to make waves this year, but their starting linebackers average a year of experience, with little depth behind them. Diles would serve as an able backup to Moise Fokou and Jamar Cheney, and could spell rookie Clay Matthews III at middle linebacker. 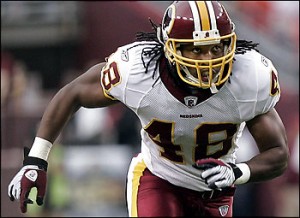 The Redskins apparently tired of Horton’s inability to stay healthy. Combined with their depth at safety, the Redskins waived a player who ended up on injured reserve the last two seasons. The 27 year old Horton has started 29 games over his three year career, though none as good as his first, when he recorded three interceptions while starting 14 games as the replacement for the murdered Sean Taylor. While he isn’t fast enough to cover most top receivers deep, he is solid against the run and in the middle of the field.

Our Guess: Behind Eric Berry and Kendrick Lewis, Kansas City has… Nothing. Veteran Jon Mcgraw is fine for a handful of downs on dime packages, but can’t be counted on to start long term if anything happens to a starter. For a 2010 playoff team looking to return, this is a weakness that the Chiefs need to address. Horton might be an injury risk, but if healthy he can be a solid contributor. 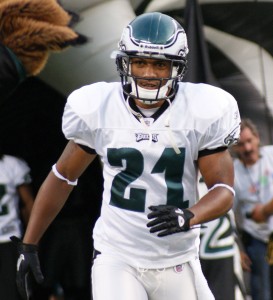 The writing was on the wall for Hanson the moment the Eagles brought in Asomugha and Rodgers-Cromartie during the offseason. The thirty year old nickel back cost too much to trade and with third round pick Curtis Marsh on the roster, Philly was able to let him go. Hanson has never been able to match up with the top receivers, but he is still able to cover the slot and provides a stable veteran presence on passing downs.

Our Guess:With Brian Witherspoon and Terrell Thomas both out for the year with ACL injuries and rookie Prince Amukamara out for at least another month, the Giants are desperate for help in the defensive backfield. Add in the knowledge of division rival Philadelphia’s playbook and Hanson should be at the top of the list for New York. 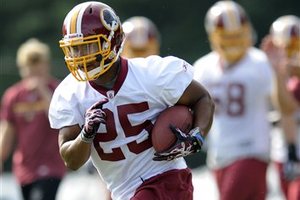 In a year when a number of veteran running backs, like Chester Taylor, Sammy Morris and Larry Johnson felt the cut day axe, Royster presents the most upside of any back on the market. A sixth round pick in 2011 out of Penn State, Royster was unable to overcome injuries and a lack of a single outstanding skill. An undersized back, Royster also lacks that open field burst that teams look for out of smaller rushers. What he does well though is his ability to make opposing players miss. Anyone who watched him as a Nittany Lion saw a player with great vision and the ability to make opposing players miss. He might be a project, but he has far more upside then anyone else on the market at RB.

Our Guess: Following the loss of exciting rookie back Ryan Williams, the Arizona Cardinals go into the season with the disappointing Beanie Wells as their feature back and special teams ace LaRod Stephens-Howling as their second option at RB. While both players have shown flashes of talent, the addition of Royster will provide depth and upside. With new addition Kevin Kolb leading the offense, the Cardinals would do well to provide another backup to the oft-injured Wells. 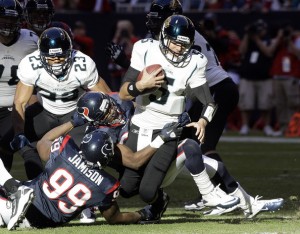 The drafting of Terrelle Pryor appears to have doomed Edwards’ stay in Oakland. The Veteran QB has now been released by three teams in the past year, Oakland being the best of them. The former starter in Buffalo, Edwards was unable to beat out Kyle Boller for the backup position to Jason Campbell. If you are wondering why that acheivement puts him on this list, consider the best remaining QBs left on the market, Josh McCown, Dan Orlovsky and Kellen Clemens.

Our Guess:Let’s be clear, Trent Edwards should never start for another NFL team. He is a marginal talent, but with a significant number of teams currently carrying two quarterbacks he should be able to find a roster spot. The most likely landing spot is Baltimore, as the Ravens have only exciting, but injured, rookie Tyrod Taylor backing up Joe Flacco. 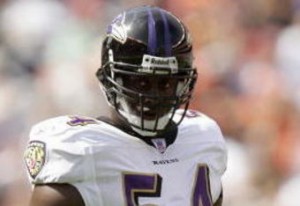 While hardly a difference maker at Linebacker for the Ravens over the last few years Burgess has excelled on special teams, recording 31 tackles over the last two seasons. Originally drafted as a compliment to Ray Lewis, Burgess has never proven to be able to play regularly on defense, and became expendable thanks to the depth Baltimore has on special teams. Only 27, Burgess should catch on with a team looking to improve their kick coverage teams (assuming teams in the league are still bothering with that this season).

Our Guess: Indianapolis has been abysmal in recent years on coverage, ranking near the bottom the last few years. While Burgess won’t be a difference maker, he will be an upgrade for a team looking to take advantage of Manning’s rapidly closing window. 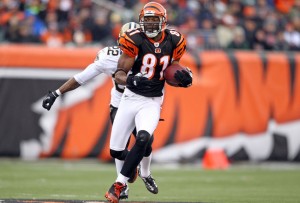 Our Guess: It’s tempting to say Philadelphia, with three young wide receivers all with injury issues, I think that bridge has been burned. Our guess is Oakland. Their top four receivers have 135 career receptions combined, TO starred across the bay in San Francisco for seven years, and Al Davis is just crazy enough to bring him in.