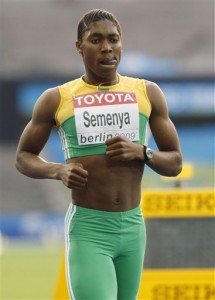 Track isn’t exactly high on the priority list of U.S. sports fans, but this story might raise a few eye brows. It involves South Africa’s Caster Semenya, an 18-year-old who just won the 800 meters during this week’s IAAF world championships in Berlin, Germany. That alone might not be breaking news. The fact that she did so in dominating fashion as a teenager, also probably isn’t enough to really make waves. But when people question that she might actually be a man. Now that sparks headlines. Dude looks like a lady?

Track’s governing body, IAAF, has asked the South African federation to conduct a gender test on the newly crowned world champ, who cruised to an easy victory in a world-leading 1 minute, 55.45 seconds on Wednesday. The test was actually requested about three weeks ago, after Semenya burst onto the scene by improving her personal bests in the 800 and 1,500 meter races by huge margins. And considering her domination at such a young age, questions have begun to arise worldwide. The verification process is described as very long and very time consuming, but Gunaxin readers can take a quick glance at the picture to the right to make their own determination (Note: the armpit hair doesn’t help). American fans might also be wondering if this type of test should be performed on about half the WNBA. Don’t want another Juwanna Mann incident. Or a female Bender: 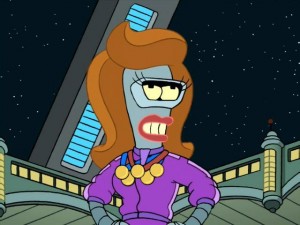 Here’s your chance to cast your vote in this Crying Game type fiasco:

And here’s a few videos on the general Mrs. Doubtfire theme:

To Wong Foo:
Thanks for Everything,
Julie Newmar