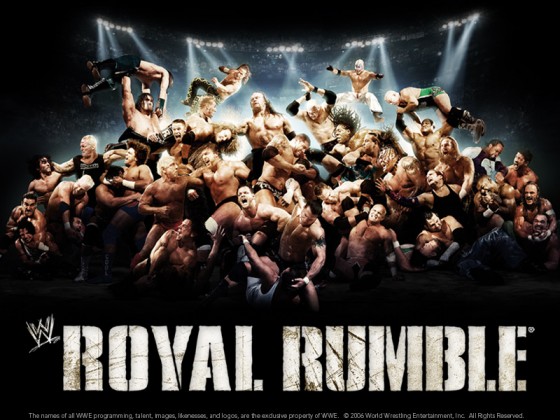 We’re not going to bother with a “What Is The Royal Rumble?” intro. If you clicked on this thing, you either know exactly what this match is or you’re drunk as hell and just randomly clicking on shit. If that’s the case, welcome!  Please Google the rules of this thing and then come back enlightened. If you can remember where the damn link is.

Now then, articles are all over the Internet about the best Rumble matches, best individual run, etc., but nobody has shown any love for the Final Two. There’s something special about an hour-long match featuring 20-40 guys (depending on the year) being gradually whittled down to two. Of course, not every finale is created equal. Which ones generated awesome moments and genuine excitement, and which ones shouldn’t have even bothered showing up?  Leading up to Sunday’s 25th Royal Rumble, here’s a quick review, starting with the worst.

Ugh.The most recent Rumble ending is also the absolute silliest. This was almost one of those shitty one-second finales, as del Rio had snuck up on Randy Orton whose back was turned after tossing Wade Barrett, and eliminated him immediately. So it looks like del Rio got himself an easy win, right?

Shut up, you wrong! Santino, a comedy wrestler in every sense of the word, had been hiding outside the ring and was still legal. He sneaks up from behind, hits del Rio with the Cobra (a shockingly shitty Vulcan Neck Pinch), and plays his imaginary trombone in premature celebration. This is why you are ashamed to admit you’re a fan of this shit.  Santino actually damn near tosses del Rio before he wakes up and sends Special Mario flying.

A novel idea, but it did not work. There are always comic relief spots in the Rumble match, and they’re usually welcome. Just not at the very end; that’s like Jar-Jar Binks randomly showing up and killing Palpatine. 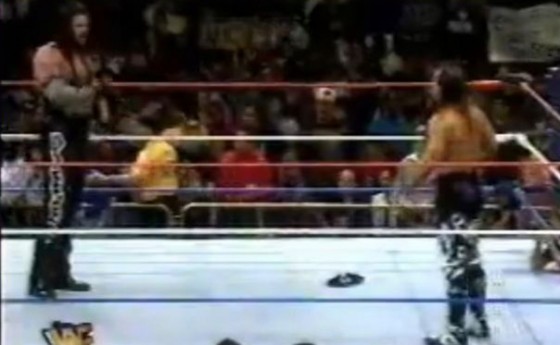 These two main-evented the previous year’s WrestleMania. So now they’re the final two in a Rumble. Gonna be a barnburner, right? Right? Shit no! Their big moment lasted literally three seconds.  iesel’s back was turned after tossing another wrestler, and Michaels took advantage. Superkick, boom, floor, Shawn wins. And then he moons the crowd, just to remind them what he thinks of their expectations. 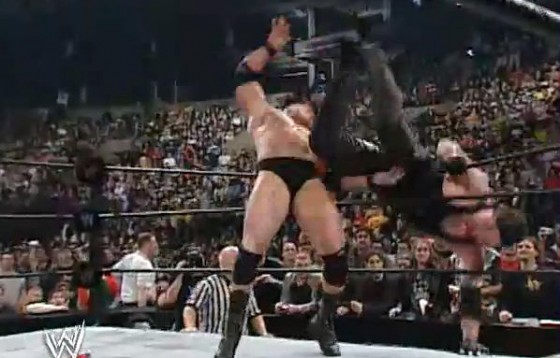 Blink and you miss it. Undertaker’s back is turned following an attempted sneak attack by Batista, who had been eliminated earlier and was none too pleased. Lesnar takes advantage of the distraction, winning after a grueling zero seconds of back-and-forth action. Must’ve been more important to further that Batista/Undertaker feud that took FOUR YEARS to materialize. Oh, and Lesnar/Taker were #29 and #30, respectively, meaning neither broke a sweat that night. Nice work if you can get it. 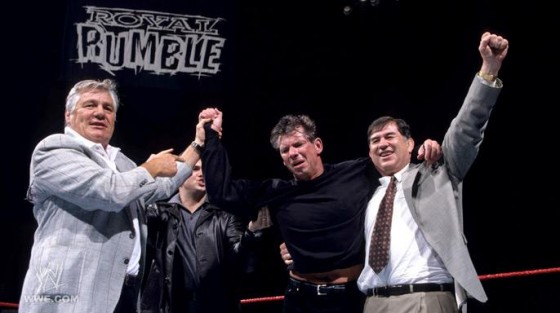 Yes, Vince McMahon. Did you block this one out of your mind? Well, TOO BAD, because we’re bringing it back!  McMahon and Austin were the first two in the match and the last two, though Austin spent most of time in an “ambulance” and McMahon hung out on commentary. Austin returned near the end and tossed everybody, and then proceeded to beat McMahon to a pulp for a few minutes. Then The Rock showed up to distract Austin, allowing the OLD BUSINESSMAN WHO IS NOT A WRESTLER to eliminate the WRESTLER to win the WRESTLING MATCH. Awesome. Also, why the fuck did McMahon wear a big heavy sweatsuit during the match? No wonder he was exhausted despite not doing a damned thing. 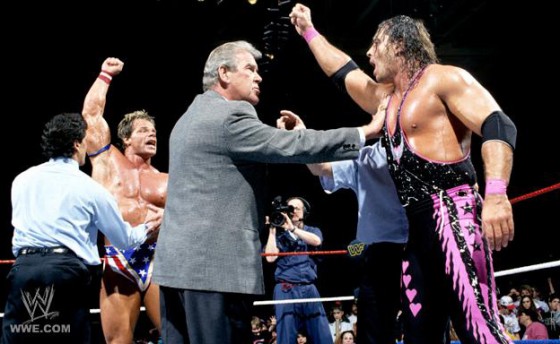 *sigh*…this one.  Hart and Luger tussle for MAYBE 25 seconds, and then they BOTH go over the rope and hit the floor at the same time (give or take). Despite the crowd clearly clamoring for Hart to be the winner, and later video evidence clearly showing Luger hitting the floor first, the match was declared a tie. Yes, a tie. Like a damn soccer game. Wrestling’s notorious for repeating finishes after a little while; has this one ever been duplicated? Um, no. No it has not. And if there is a fair and just God out there, it never ever will.

And now to prove we’re not all Negative Nancies here: the top 5 Rumble endings.  Presented by Positive Pete!

It’s 1994 all over again! Minimal action, double elimination, deflated crowd. But this time we got an actual finish and just TONS of unintentional hilarity to boot. After a failed powerbomb sent both guys over the ropes at the same time, Vince McMahon stormed out to settle the issue. He tore one of his quadriceps on the way — by powerwalking. Once he made it into the ring, he tore the OTHER quad.

So now he’s sitting on his ass, looking up at the referees like an impudent child, watching Cena and Batista take turns tossing each other out like they’re auditioning for a movie role, and finally demanding the match be restarted.  It was, and Batista soon sent Cena flying over the ropes to win.

Oh, and to add to the hilarity, all this was most likely unplanned. Batista was supposed to hang on during the powerbomb while Cena tumbled out, but he slipped like a big galoot. Blame Vince’s crippling injuries on Batista’s dumbass. Also, the dump truck full of steroids. That didn’t help either. 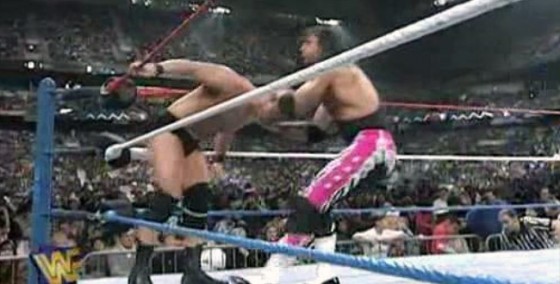 Try to follow us here. Austin was one of five guys remaining and was tossed by Hart. But no referee saw it, as they were all too busy breaking up a fight between two guys who were already eliminated. You’d think at least one of the four or five refs would remember to do their job, but since the best refs have the worst tunnel vision, no dice. Austin took advantage, snuck back in to the ring, and eliminated everybody remaining, with Hart being the final victim. Hart’s temper tantrum after realizing he got screwed is one for the ages. The actual “finale” took maybe a second here, but the circumstances surrounding it were interesting, to say the least.

Awesome and brutal. Kane had been in the match for almost an hour and had basically destroyed everybody the entire time. Austin entered late, but was gushing blood from an attack by HHH while he was making his way to the ring. This finale was basically two guys destroying each other. In the end, it took Austin three chair shots to the head to even bring Kane to the ropes, and then another big clothesline to finally eliminate him.  Both guys looked badass after this one. 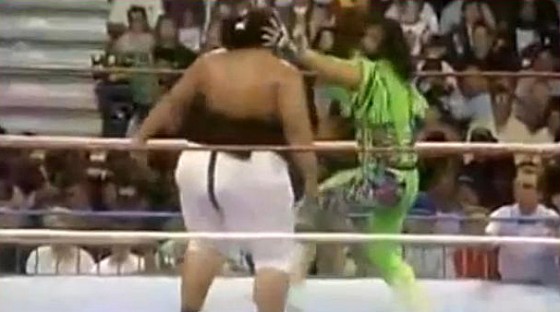 Now this was fun. Yokozuna was an unstoppable sumo monster, and if you don’t know who Randy Savage was, then you’re probably an infant or something, and therefore too young to be reading this. Why are you here, baby?  Doesn’t Dora The Explorer have a website? Go there.

This finish as all about Savage, outweighed by 250 pounds, getting his ass handed to him and constantly making desperate comebacks. And it almost worked, as Savage became the first wrestler to knock Yoko off his feet. Savage reacts by hitting a Flying Elbow. Alright, fine. Soften the big blimp up a tad. Then, he went for a pin. In a battle royal. Yoko immediately realized how stupid this was and just power-pressed Savage over the ropes to end the thing. That anticlimax aside, this was easily the best Rumble ending to date, and wouldn’t be topped for damn near a decade-and-a-half.

THIS is what a Rumble finale should be. For nearly ten minutes, these two just went out and tried to destroy one another. Tons of near-eliminations, tons of suspense, and fans legitimately had no clue who would win. Undertaker eventually won, but it didn’t much matter because they had put on such a tremendous show. Also, both men got title shots at WrestleMania, due to there being two World Championships and both men being super-duper star main-eventers.  Just like 2005, actually.  Hooray, diluted belt system!

Watch (in two parts as the finale was that long):