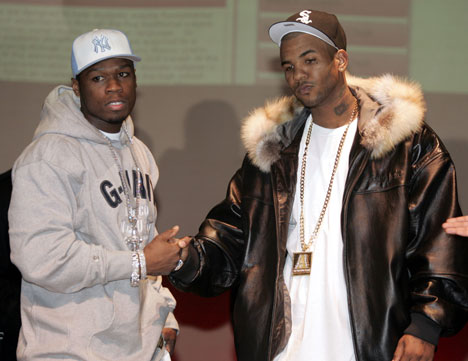 The diss song is a lost art in hip-hop these days. We don’t have the famous beefs of the mid 1990s anymore, which is probably a good thing considering their potential role in the untimely deaths of arguably the two greatest rappers of all-time, Tupac Shakur and Notorious BIG. Nas and Jay-Z went at it a few years ago but have since reconciled. It seems like the only person who disses anybody these days is The Game and he doesn’t generate much of a response. Regardless, here is a look at the top five rap diss songs.

Notable because it started the LL Cool J/Canibus beef, with LL getting offended by Canibus referencing the microphone tattoo on his arm. LL’s final verse in this song is a strong one, regardless of how you feel about him overall. The verse led to the response “2nd Round Knockout” from Canibus, which LL responded to with “The Ripper Strikes Back” and on and on…

An underrated 2pac song, maybe because he only has the first verse but this intro track to his Makaveli album is a vicious, angry, song that gets in shots at Bad Boy, Jay-Z, Mobb Deep, and everybody else in sight. Listen to the “Suge Shot Me” at the two-second mark, conspiracy theorists where you at?

Both are prominent parts of the recent Eminem/Dr. Dre – Ja Rule beef. If you are ever about to get into a fight I’d recommend “Go To Sleep” as Eminem and DMX completely rip the track to pieces. I also included “Shit Hits the Fan” because Dr. Dre steps out of character in the first verse and easily tears Ja Rule apart, dusting off his diss game for the first time in years.

Say what you want about The Game, but this an incredible piece of rapping, as he strings together nearly a 15-minute diss to 50 Cent and G-Unit over a collection of classic beats mixed together by DJ Skee.