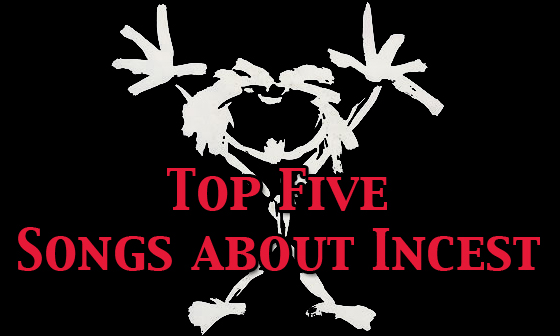 With love and heartbreak as the bulls-eye, life’s target of issues is peppered with musical darts. Far on the outskirts, spots seldom hit, are the sensitive subjects, the taboo, the ones that make our skin crawl. Songs about prostitutes, rough sex, abortion, suicide, and the devil. One of the most profane and perverse of these subjects is incest (typically accompanied by potentially related issues, such as child abuse).

After careful review, I found most of these songs aren’t exactly ones I’d blare in the car with the windows rolled down, which is no surprise since subjects such as this are more likely to be diaries into the singer’s soul instead of head-banger fodder. Therein lies the difficulty in ranking these. Most are relatively obscure and have little to no chance of regular radio airplay. This isn’t necessarily because of the subject matter, but because the music itself doesn’t have mass appeal, even by some popular artists like Prince and Three Doors Down. Therefore this list is the top five popular songs about incest (though two of the five are still kinda obscure). Because why rank songs that no one has ever heard of? Let’s take a look.

By the ’80s hair metal band off the 1993 album Face in the Heat, a mother refuses to believe her daughter is being molested by her father.

Not one to stray away from the taboo issues, Dave Mustaine and company released this song about father-daughter incest on 1994’s Youthanasia.

Made popular by the movie The Lost Boys, this song’s lyrics “Cry little sister, love is with your brother” may just be a metaphor but sounds enough like incest to include on this list. Plus, it’s a great song. Even Eminem samples part of the song on his album Recovery.

Janie’s Got a Gun
Aerosmith

Off Aerosmith’s 1989 album Pump, Janie kills her father after he sexually abuses her. This song is frequently heard on the radio today because quite simply, it rocks.

After listening to this song for 20 years (20 years in Sept. 2011, in fact), it came as a shock to me that it’s about an incestuous relationship between a mother and her son, ala Oedipus Rex. The son, who resembles his biological father, finds out his father is really his stepfather. This is part of the “Mamasan Trilogy” of songs on the subject, including “Once” (also from Ten) and “Footsteps” from the Lost Dogs album.

Here are some more songs about incest that missed the cut.

The Doors – The End

This song has a single line about incest.

Kate Bush – The Kick Inside

The Who, from Tommy – Fiddle About