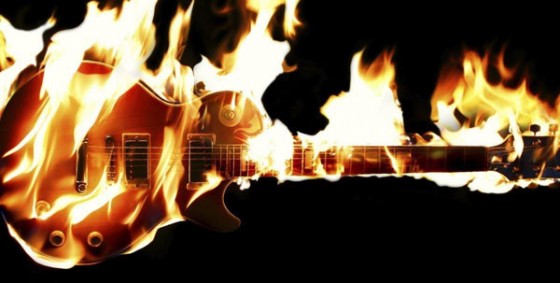 A great man once said, “Behind every beautiful thing there’s been some kind of pain,” and nothing confirms this sentiment more than songs.

Erstwhile troubadours and forensic nihilists often beat us over the head with their mournful diary entries about women who don’t understand them, men who mistreat them and monstrous days of the week that aren’t Friday or Saturday.

Sometimes, this extends to actual real problems, and not just the normal misanthropic musings on existence – though most of the songs below are written by definite people haters. Anyway, these tracks go beyond the normal loss of love, innocence or the right to party. Instead, they draw inspiration by murder, suicide, mental illness and sweet, terrible pain.

We’ll start with the most obvious and well-known example, American Pie by Don McLean. Famously this song begins with a verse about “The Day the Music Died”, referring to the tragic 1959 plane crash that killed Buddy Holly, Ritchie Valens, and J. P. “The Big Bopper” Richardson. Don McLean’s 1971 song uses that incident as a starting point for his meandering look at American culture following World War II. It’s not as personal as the rest of this list, but it’s so well known we had to include it.

The Beach Boys released the album 20/20 on Capitol in 1969. In the doldrums after the soaring heights of Pet Sounds some four years previous they had struggled to repeat the success of their early sun and surf hits.

Their latest album didn’t exactly rectify this. Brian Wilson, mentally shattered after the abandonment of the album Smile, featured little on the record with songwriting duties taken up by the likes of Dennis and Carl Wilson, and Bruce Johnston. It reached number 68 on the US charts, failed to reestablish the group as a major player in the industry and was otherwise unremarkable. Well, except for one song: “Never Learn Not To Love,” written by one Charles Manson.

Manson had met the band after Dennis Wilson had picked up a couple of hitchhiking women who turned out to be followers of the cult leader. Wilson returned home that night to find Manson, the two women and about a dozen other strangers had taken up residence in his house. Initially things went fine, though the numbers continued to grow and be fed by the generous Beach Boy.

Manson was a keen songwriter and offered the song “Cease To Exist” to Dennis who promptly recorded it with his band and changed some lyrics slightly in the process. Manson was not impressed and delivered a bullet to Wilson’s door. Still, the song and album were released in February of 1969 and the Beach Boys would go on to perform it on live TV. By the end of the year, Manson would be in custody after the murder of the pregnant actress Sharon Tate and five others.

3) The Temptations – I Wish it Would Rain

The Temptations were one of the biggest bands in the world in the mid sixties. Hit songs and any-era classics like “My Girl”, “Since I Lost My Baby” and “Ain’t Too Proud Too Beg” confirmed the group’s status as one of Motown’s many many hit machines.

“I Wish it Would Rain” was released by the group in 1969 and showcased one of lead singer David Ruffin’s most stirring vocal performances in a song about a man who lost his girl and wishes the rain would fall to hide his tears.

Unlike a lot of Motown’s production line of songs, the pain behind this one was 100% genuine. The lyrics were written by Motown staff writer Roger Penzabane who had already penned songs for Gladys Night, Marvin Gaye and The Temptations.

One of these was called “You’re My Everything” which had the loved up writer talking about just what his girl meant to him. It was written as a personal statement of love for his wife who over three verses we hear has “changed his life…kept the world from closing in on him” and that he…

Was blessed the day I found you,

Gonna build my whole world around you,

You’re everything good girl, and you’re all that matters to me

She sounds pretty great, right? Well, that was until poor lovesick Roger found out she was cheating on him. Unsurprisingly, he was utterly heartbroken and poured all his pain and hurt into the lyrics of his next song, “I Wish it Would Rain,” which is a window into a slowly unraveling writer’s soul.

It was a tour de force of heartbreak, featuring bird noises and a beautiful rolling piano riff. It was released in December 1967. A week later on New Year’s Eve, Penzabene committed suicide.

Perhaps the most famous family tragedy in music. On March 20, 1991, Conor Clapton fell from the 53rd-story window of the New York apartment he was living in with his mother, Italian actress Lori Del Santo.

His father, Eric Clapton, was staying at a nearby hotel – mother and father were never married and Clapton was still married to George Harrison’s ex-wife and uber-rock muse Patti Boyd.

A window was left open by a cleaner, who had just finished cleaning the room and felt it needed to be aired out. The boy ran past him and fell out the 6×4 foot opening. Clapton abandoned performing for several months while he came to terms with his grief before collecting his thoughts into this classic weeper, co-written by Will Jennings.

1) Eels – Elizabeth on the Bathroom Floor

Mark “E” Everett’s second studio album, Electric Shock Blues, is about as bleak as a winter’s day in Manchester. The entire thing was written in response to his sister’s suicide and his mother succumbing to terminal lung cancer.

His mother had been ill for a long time and it was left to E to look after her – his father had died in 1982 of a heart attack. Everett discovered the body.

The particularly maudlin song on the album is the opener “Elizabeth on the Bathroom Floor” which was composed principally from a diary entry of his late sister, who had repeatedly attempted to kill herself, eventually succeeding on her ninth attempt.

The song details the aftermath of an earlier failed attempt. Everett, singing in his usual gruff whisper, can occasionally obscure the cleverness, and in this case the bitterly personal nature of his song lyrics. Written by a suicidal, unstable young girl shortly after she’d attempted to take her own life, it makes for an uncomfortable listen.