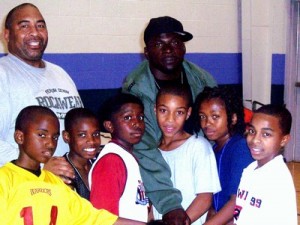 Athletes. They’re our heroes and our villains. They make millions in their 20s and are flat broke in their 40s. They sleep with hundreds of women and don’t think twice about knocking them up, whether they’re married or not. This is not to say that they do not care for their children, and they may even provide for them, but I can’t help but think the people on this list should be frowned upon for their procreation habits. Kids, if you’re reading, try not to be like these guys when it comes to the act of child-making. And to be fair, I’ll note their positive qualities (if any). It is Father’s Day, after all.

5 kids by 4 women; 3 are illegitimate

Remember “Grandmama?” Despite being a cross dresser, Johnson spent his pro career with the Charlotte Hornets and New York Knicks. In 2007, Johnson received a bachelor of arts degree in social science studies from UNLV.

Rumored to have 6 children by 4 women

This Baltimore Raven (since 1996) has been involved in charitable activities throughout his career and started the Ray Lewis 52 Foundation, which is a non-profit corporation whose mission is to provide personal and economic assistance to disadvantaged youth.

Rumored to have 6 children by 3 women

Faulk, who spent his career with Indianapolis and St. Louis, currently resides in San Diego and has also has a charitable foundation there.

This longtime Supersonic was never married and had a cocaine problem.

Thomas left no will, and his children’s mothers filed suit with the probate court for a share of his $1.16 million in assets, touching off a lengthy court battle.

He played for the Spurs, Raptors, Knicks and Heat. Not surprisingly, he got into trouble with not paying child support.

At least 11 children, 9 out of wedlock

Holyfield is a born-again Christian. And he kept reminding people of that as he continued having children. In 2008, Holyfield’s $10 million Atlanta estate was to be auctioned due to foreclosure. Toi Irvin, mother of his son, filed suit for non-payment of two months child support (he pays $3,000 per month for this child). A Utah landscaping firm also has gone to court seeking $550,000 in unpaid debt for services.

According to WGR 550 SportsRadio, the former Bills running back will serve ten years to life in prison for cocaine distribution and will have to pay $4 million in fines. And yes, he has been in big trouble for failing to pay child support.

Murphy, who played guard for the Houston Rockets from 1970-1983, won a national championship in baton twirling in 1963, is in the NBA Hall of Fame, hosts ESPN Radio’s “Calvin Murphy Show” and is involved in the NBA’s mentoring program. But 14 kids by 9 women? Ick. Number one, for sure. Oh yeah, he was accused of, and acquitted of, molesting five of his daughters.

For everything you ever wanted to know about Athletes with Illegitimate Kids, including many more that didn’t make the cut for this list, check out FanIQ.

Ones we’ll be adding to this list: Antonio Cromartie, who has 9 kids with 8 mothers,