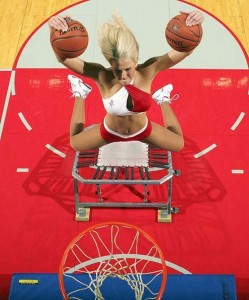 Tonight is the Slam Dunk Contest at NBA All-Star Weekend. No wait, I have to be official here and call it the 2010 Sprite Slam Dunk competition (where’s my money Sprite?). This year’s competitors are Nate Robinson, Gerald Wallace, Shannon Brown and Dunk-in winner (Eric Gordon or DeMar DeRozan).

Now, the dunk competition has had its ups and downs. Over the past decade it has been criticized for lackluster dunks, although Dwight Howard and Nate Robinson have brought a certain amount of excitement in the past two years. In case this year’s contest ends up a bit lackluster, here are ten great dunks that won’t be a letdown:

Slamball athlete Chris Robbins proves you can dunk from your back.

The Raptors mascot shows he can dunk while flipping and with a giant foam dinosaur head.

Not to be outdone in terms of trampoline dunks, a world record for distance is set.

There are plenty of backboard pass dunks, even a few self-passes off the backboard. But how many threw in a windmill off the bounce?

Not sure if the dunk actually went in, but make or not when you hurt yourself in the process it’s a fail. This one gets bonus points for the hilarity of it all. It’s funny because it’s not me!

From Darryl Hawkins to Darvin Ham, the shattered glass dunk is always a great one. This one gets extra credit for the alley-oop and the reverse jam.

Even as the defense backs off, this one is still impressive.

You don’t even need the backboard to do a real self-pass.

2. The Dunk of Death

The greatest basketball player of all time doing his best dunk, right in the face of Patrick Ewing.