It’s got to be the shoes! Ever since Michael Jordan arrived in the NBA and Nike launched its first pair of Air Jordans, the shoe scene has never been the same. Expensive sneakers became the norm, collectors began to exist, and kids were even stealing each other’s shoes.

Now I’ll grant you that ranking shoes is often a generation dependent concept and the criteria is entirely subjective, but we at Gunaxin wish to present to you the Top 10 Basketball sneakers of all time. And if you’re really into shoes, I’d suggest checking out the Sole Collector for more info. 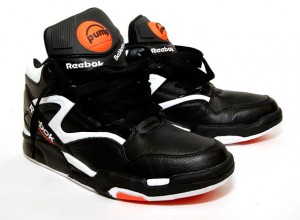 The Reebok Pump was very popular popular in the early 1990s, featuring an internal inflation mechanism that regulated a unique fitting cushion in the upper tongue. Users could literally “pump it up”. Released in 1989 as basketball high-top, the success of the pump led to models for football, tennis, and track. The Human Highlight Reel Dominique Wilkins wore the Reebok Pump original from 1989 on, and Dee Brown made them memorable in the 1991 All Star weekend dunk competition. Here’s a sample ad: 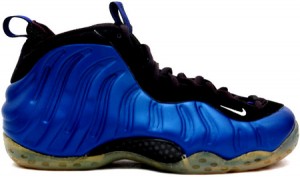 Foamposite One was the first shoe model to use Foamposite technology, a synthetic foam that molds to one’s foot giving the wearer a truly custom fit. The shoe also featured synthetic leather and a clear gum sole. Worn by Anfernee “Penny” Hardaway back in 1997, Nike reworked the original Foamposite One into the Nike Foamposite Lite worn by 2009 NBA Slam Dunk Champion Nate Robinson. They also released retro versions of the original. 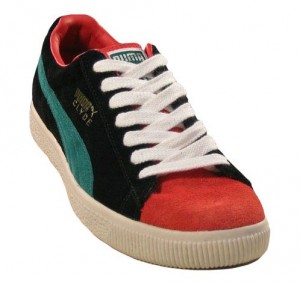 Released in 1973 the “Clyde” was a custom version of the popular Puma Suede, tailor made for basketball legend Walt “Clyde” Frazier. Frazier asked for a wider-fitting version of their suede basketball shoe and Puma ended up signing him to an endorsement deal, becoming the one of the first NBA players to have his own signature shoe model. Because Frazier encapsulated the very essence of being cool (he would arrive at games in a Rolls Royce, dressed in designer suits, broad-brimmed Borsalino hats, and full-length mink coats), the shoe caught on in all walks of life. Traditionally seen in suede, Puma recently released a few models which appear in all leather. 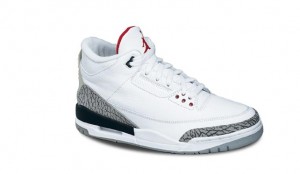 You could fill an entire top ten with versions of the Air Jordans. Some like the Vs, others the IVs, others the Space Jam XIs, the VIIIs, the newer XXIIIs, or even the XIVs. Here we’re going with the Air Jordan IIIs. Released during the 1987-88 season, they debuted in the season when Jordan would receive his first MVP award and win the Slam Dunk contest. It was also the first Air Jordan to feature the Jumpman logotype instead of the Wings-logo that was on the I’s and II’s. And it gets a bonus for launching the Spike Lee personality Mars Blackmon and the ad campaign that followed: 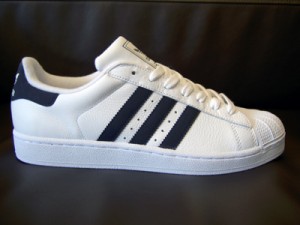 The Superstar has been manufactured since 1969, and was the first low-top basketball shoe to feature an all-leather upper with the now famous rubber shelltoe. The shoe caught the attention of some of the best players from the NCAA and NBA, most notably Kareem Abdul Jabbar. Within the first few years of its introduction, it was being worn by over 75% of all NBA players, proof of its revolutionary technology which remains relevant today. The shoe became so popular, rap trio Run-D.M.C. became noted for wearing the Adidas shoe, even releasing the song “My adidas” in 1986. 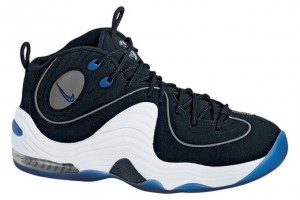 How do you not love a shoe that helped bring us the creation that is Lil’ Penny, the the half-pint, trash-talking sidekick of Penny Hardaway? Even though Hardaway faded away fairly quickly, his shoe line lives on as Nike recently brought back the Air Penny II with a re-release. You know, in case you missed them the first time around. Originally released back when Penny Hardaway was tearing up the NBA, his second signature sneaker gathered mass attention when he wore them in the 1997 NBA All-Star Game. They featured an Orlando Magic color scheme, “Air” technology in the heel and forefoot, “Penny” logo on the side panel, and the always recognizable carbon fiber shank at midfoot for added arch support. The shoes might even get you a date with you a date with Tyra Banks. Although in 2009, that’s not as alluring as it was a decade ago. 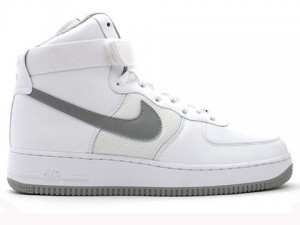 Released in 1982, the Air Force 1 featured a then revolutionary technological innovation, a pocket of air in the heel for cushioning and support. Players like Moses Malone and Michael Cooper endorsed them, and twenty seven years later Rasheed Wallace still wears the shoe. Dubbed the # 1 seller in the history of athletic footwear, it has been available in a wide range of color combinations, although white-on-white is the most popular model. 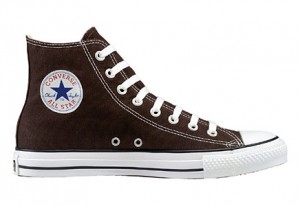 A true classic. The Chuck Taylor All-Stars, or simply “Chuck’s” have been around in some form since 1917. They were not particularly popular, however, until basketball player Chuck Taylor adopted them as his preferred shoe. That led to the shoe’s current name and signature ankle patch. Although classic black is the most popular, they come in a variety of colors and print styles, which has led to their popularity in many subcultures beyond the intended basketball audience. 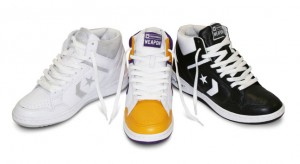 Back in the day everybody who was anybody was hocking the Weapon, including Larry Bird and Magic Johnson. Just look at the commercial featured below. And remember, this was in the days before every rookie got a shoe contract. The brand was so popular, Converse recently brought back the classic sneaker. The Bird Shoe. The Magic Shoe. Choose your Weapon! 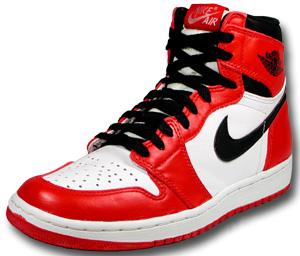 Jordan started the shoe era and made it what it is today. For that reason it gets to be number one on this ranking. I’ll grant you that later versions of the Air Jordans were more popular, but there’s always something going for the original. This shoe was so revolutionary that it was outlawed by the NBA. Released during Jordan’s rookie season, the typical shoe was white with very little color. The league deemed the Air Jordans “too colorful” and banned them, leading to the infamous Banned commercials: