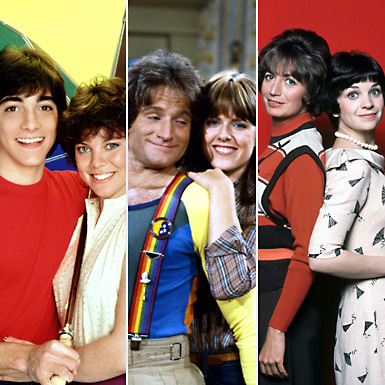 The television sitcom is dying. As the networks continue to cut costs and water down the airwaves with reality shows, the future of the situation comedy is going the way of the dodo. And now that I’m getting used to not loving Fox’s The Cleveland Show (a spin-off of Family Guy), it got me thinking about the best television comedy spin-offs, some of which became more popular than the show from which they were spawned.

(Note: It’s said that Happy Days was a spin-off of Love, American Style, but Garry Marshall first shopped it to networks unsuccessfully before Aaron Spelling used it for LAS, which was really only a show based entirely on rejected scripts. So it’s not really a spin-off.)

A spin-off of a recurring series of comedy sketches called The Family from The Carol Burnett Show in the 1970s, Mama’s Family was short-lived but very memorable because of Vicki Lawrence, who played Thelma Harper. The show lasted one season on NBC before it was cancelled, and then it was picked up in syndication for a few years. This is oddly addicting to watch:

Originally a spin-off of Diff’rent Strokes, the series featured the Drummonds’ housekeeper, Edna Garrett, as the housemother of a dormitory at a private all-girls school. All I remember about this show is the theme song, and Natalie, Blair and Tootie.

Mork (Robin Williams) first appeared on Happy Days when he attempted to take Richie Cunningham (Ron Howard) back to Ork as a human specimen, but Fonzie (Henry Winkler) foiled his plan, of course.

This classic started as a skit on the Jackie Gleason Show (Gunaxin writer Stew‘s grandmother once sang on that show) but lasted only 39 episodes, and that’s why it’s not higher on this list. Had it lasted longer, it likely would have been watched by much later generations, like I Love Lucy was. However, it provided the inspiration for another classic character that is known by all: Fred Flintstone. Also, The Honeymooners is the only one that wasn’t spun off from a supporting character.

Edith Bunker’s cousin, Maude, was played by the lovely and talented Bea Arthur, may she rest in peace (see Gunaxin’s tribute). The most famous moment of this show came when Maude decided to get an abortion, and I’m assuming that was pretty damn funny. Just imagine the cracks that Sophia (Estelle Getty) would’ve made. Or was that a different show? I find the Family Guy parody of the opening to be funnier than the show itself:

Maude’s housekeeper, Florida (played by the lovely and talented Ester Rolle, may she rest in peace), got her own show and that gave us J.J. (Jimmie Walker)!

Laverne De Fazio (the lovely and talented Penny Marshall) and as Shirley Feeney (Cindy Williams) were originally introduced on Happy Days as acquaintances of Fonzie. Now, Marshall has an uncanny resemblance to Ozzy Osbourne. Also, don’t miss Gunaxin’s tribute to Lenny and Squiggy.

George Jefferson was the perfect neighbor for Archie Bunker, and giving Sherman Hemsley a spin-off was the biggest no-brainer in TV history. Also, theme songs aren’t what they used to be. Even Hitler liked this one:

Dr. Frasier Crane (Kelsey Grammer) was a great character on Cheers and then outdid himself on Frasier, which became one of the best-written comedies on television. Even its finale episode was great, something that many sitcoms just can’t seem to do correctly. Here are some bloopers:

It started off as a sketch on one of Tracey Ullman’s several attempts at a television variety show, and turned into a pop-culture phenomenon. Tell me, would The Simpsons have survived it it continued to look like this?