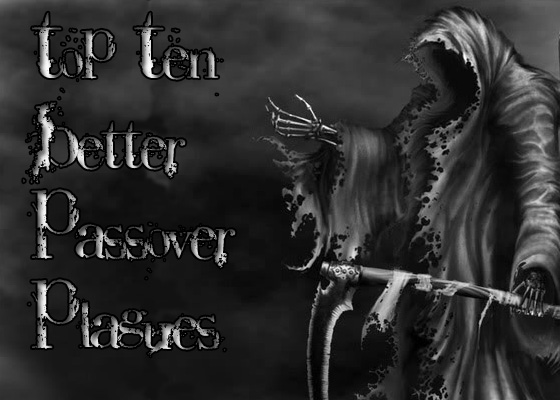 It’s not that I want to second guess the Lord, but for years I sat at Passover Seders, having no interest in the answers to the four questions but wondering why the ten plagues were so weak. Let’s face it – blood, frogs, lice/gnats, beasts, cattle disease, boils, hail, locusts, darkness, and slaying of the first born just didn’t sway Pharaoh into releasing the Jews from hundreds of years of slavery. Okay, slaying of the first born did, but we also learn that after letting my people go, Pharaoh changed his mind and sent his armies back after them as they crossed the Red Sea. Anyway, I think it’s safe to say that Pharaoh would have released the Jews a bit quicker if he put up with these plagues instead:

Sure, HIV/AIDS didn’t really appear until 3,500 years later, but I’d say this disease would’ve made the Egyptian wince.

This is similar to the third plague, just now they’re in the right place.

A simple yet painful thing that a man would do anything to rid.

I’m not even really sure what this is but I’d say Pharaoh would unshackle the slaves for this.

I’m not sure if these are plagues or a list of things that my high school classmates had.

Inflammation of the glans penis.

If you don’t know what this is, Google it and look at the photos. It’s the most disgusting thing ever.

This is much better than slaying of the first born because when the kids died, they still had the equipment to make more. Take this away from any man and he’ll give in.

Our Passover gift to you was not putting an image next to all 10 of these.