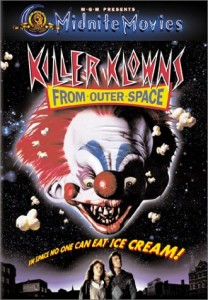 Crappy 80’s horror movies are so common that you would be sure to clobber several with a whirling deceased feline. Terrible, unforgivable, downright impossible to watch 80’s horror flicks are running amok (a few in my collection, I might add), but 80’s horror films that really do a fine job of being a horror movie and at the same time not knowing that it’s impossible for them to be taken too seriously are a far rarer breed, indeed. That was the struggle for this list. What do I base my assumptions on? Do I just assume a corny horror movie that is corny for corny’s sake is list worthy? No, that’d be too easy. Do I scrape the bottom of the barrel and choose those films that are intentionally made to force too much corny down your throat? Nope again. I had to sift through those movies that were made with every intention of being a well thought out piece of horror movie pie, yet burst open with the sickly sour flavor of corniness by sheer accident. Which isn’t to say that any of these movies is bad, because they typically, with a few exceptions, aren’t. Ok, now that the lengthy explanation is out of the way… enjoy!

“His dinner’s in the OVEN!” It’s lines like that spoken by the far underrated Stephen Geoffreys as ‘Evil’ Ed that make this film easily one of the greats in terms of 80’s vampire films, but one can hardly deny its utter corniness.

This horror film succeeds not simply thru its humor but in the way that it takes the plot seriously. That is, the characters avoid doing anything cliché or ‘movie-like’. They react to an amazingly unusual situation in a very logical, sensible way (even as things become more and more desperate). Consequently none of the humor is forced. It all comes from the combination of having to deal with all the insane things that are happening to them in the sanest way that they can. The contrast of these two makes for absolutely brilliant comedy. Oh, and Tarman? ARE YOU SERIOUS! The best!

“What’re ya gonna do? Knock my block off?” HA! The tagline seen on the DVD box art says “In space, no one can eat ice cream”. This is a play on words that pays homage to the tagline for the 1979 film Alien (1979), which states “In space no one can hear you scream”. So, I suppose it doesn’t get any more ridiculous than that, really.

Norm AND The Greatest American Hero? Corn on the DAMN cob!

‘Maniac Cop’ is the most enjoyable of William Lustig’s movies for me. If I was being objective I’d have to admit that it is really stupid trash, but that being said, I still love it and never tire of watching it. Besides, tossig the brilliant Bruce Campbell into the mix of ANYTHING instantly makes it better and cornier at the same time.

While admittedly The Burning isn’t the most well-written horror movie of the period, it’s definitely one that delivers great atmosphere and suspense. Even better for genre fans, it boasts the spectacular gore FX from master makeup artist Tom Savini. The FX in this film are highly bloody, especially during the infamous ‘raft’ scene, as you just watched. And you know, seeing Cropsy lop off Fischer Steven’s fingers makes me smile from ear to ear. He was highly irritating in Short Circuit and you know it!

Here’s the tagline. Then, you be the judge. “Angela is having a party, Jason and Freddy are too scared to come. But You’ll have a hell of a time.” There ya go.

Oh, how I wished I hated this movie. Especially since it’s an awful King adaptation (bit of an oxymoron there). However, I don’t…I actually like this movie a lot. All the critics hate it, most people I talk to hate it, but I like it. Maybe it is the cool AC/DC soundtrack (Who Made Who is such a fuckin’ sweet tune), I don’t know. The action is pretty good and there are some pretty good kills in this one, though it isn’t anything that is very scary at all. Oh well, it’s got an Estevez and Lisa Simpson, so that’s alright.

There’s little doubt that Troma would be but a shell of its current self without a little film that went on to cult stardom featuring a man named Toxie. Yes, it’s tongue in cheek, yes Troma is well known for its low budget fare, but none of that matters since The Toxic Avenger was such a departure from the sex flicks Troma had been known for before hand. So, to that end, it’s not corny to be corny. It just is.

“Witch Bitch”… For the (alternative) title alone this movie should be considered a “classic” in the industry of silly-n-cheesy 80’s horror! “Death Spa” delivers everything you can derive from the title and cool DVD-cover, rancid sleaze, a retarded plot and loads of gooey make-up effects. Yeah, it’s campy-corny nonsense, and that’s why it’s a great stretch for number one.