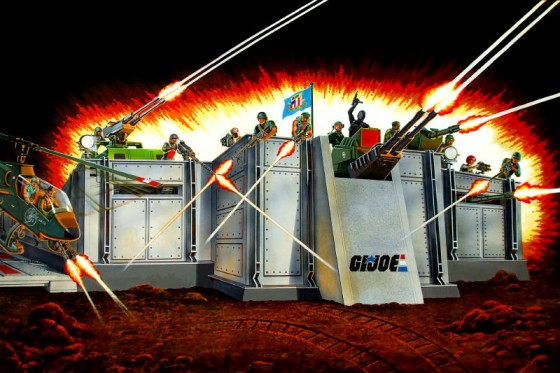 What? Oh come on, let’s not even begin to pretend that all those kick-ass playsets we boys had as children weren’t just macho versions of our sisters’ doll houses. Look, it’s not like we all don’t secretly understand that even our precious muscle-bound action figures and giant Mego Godzillas weren’t direct extensions of little girls’ Barbie dolls. Just get over it already; you’re presumably adults now. I think you’re old enough to handle the truth without throwing a damn hissy fit. Are we good now? Alright. So doll houses for boys…

Doll houses they may have been, but damn were they cool. The minute action figures took that slight leap to the left and really took on lives of their own, you just knew accessories in the form of buildings and cavernous plastic interiors portraying actual scenes from the manly movies we loved weren’t too far behind. So let’s relive some childhood memories, all you 70’s, 80’s, and even early 90’s kids, and let’s look at the doll house playsets we loved as kids.

10) Planet of the Apes Fortress 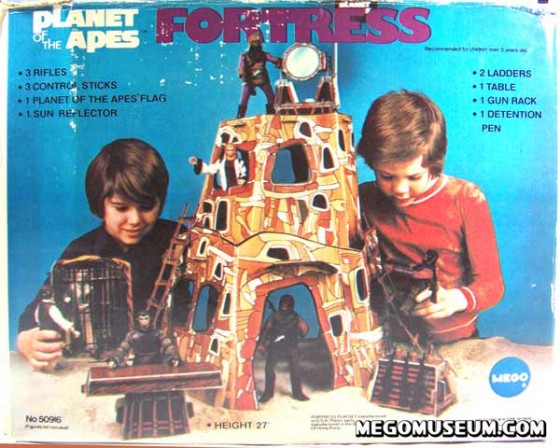 This glorious bastard comes to us circa 1975. And it might be the only one on the list that I didn’t actually own. My neighbor did. He, the big brother I never had, was inundated with a massive collection of cool toys. Anyway, this kick ass playset was brought to us courtesy of Mego and featured a whole smattering of bells and whistles, including… ladders. Oh and also a prison! Okay, look, it wasn’t what came with it that was so cool, it was the simple fact that now your humanoid apes have a comfy bungalow in which to… climb ladders. Also probably throw poop.

9) Land of the Jawas 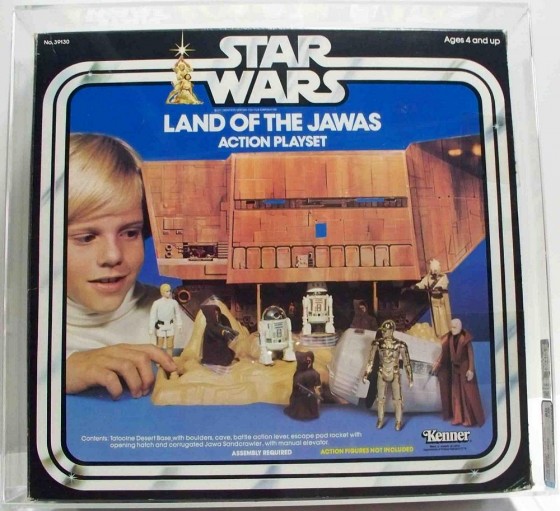 Those of us who were and are tremendous Star Wars fans can’t help but wax nostalgically about our favorite scenes from A New Hope. Ah, I remember it like it was just yesterday when the intense action and heroics of the best scene in the entire film played out before me… that’s right, the sale of the droids from the Jawas to the Lars family. Whew, just takes my breath away even thinking about it. Okay, so it wasn’t a Lightsaber battle or a Death Star trench run, but it was pretty damn pivotal. And back in 1978-79, we were starved for entertainment and frankly sick of pretending we had a Sandcrawler. So, thanks to Kenner, we could reenact the entire thing! Oh glorious days of stiffened cardboard and actual ‘Stand-Up’ action. 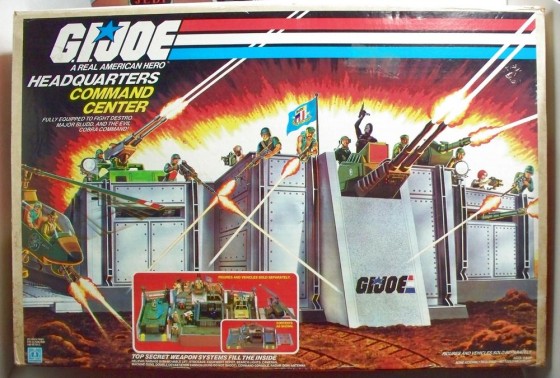 The one I’m specifically referring to here at number eight, is the Headquarters Command Center. This thing was pure perfection. Gone were the days when one would have to use yard debris to build up an impenetrable wall and just imply that the mound of sticks and dead woodchucks was a fortress. That;’s right, with this monster that hit shelves in 1983, you could (and did) make your less awesome friends jealous as you smugly placed your Joes about the big plastic walls and aimed all the guns directly at his shoebox/tank. Life was good and you were a dick. 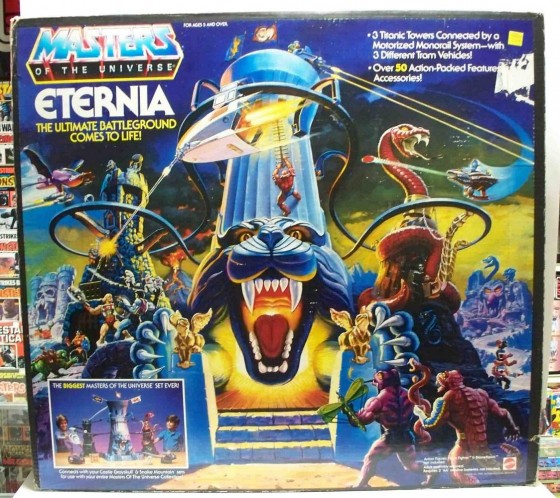 Yes, I know that The Masters of the Universe had a far cooler playset, and we’ll get to that later. But for now, let’s talk Eternia. In 1986, the action movie-inspired series Masters of the Universe was in full swing, and every kid wanted He-Man (or to be He-Man, in this author’s case) and all his pals doing endless battles with Skeletor and his minions. But you were sadly lacking and probably poor if you didn’t get your parents/Santa to get you Eternia: the playset featuring the very lands from whence Prince Adam and his cohorts emanated. It was pretty huge and took up a good portion of whichever playroom or bedroom it was used in. And man did it have accessories! A Monorail with three different vehicles, extra weapons, and a big-ass snake face! Oh, and good luck finding a decent one for less than 500$ on eBay right now. Memories are pricy, kids. 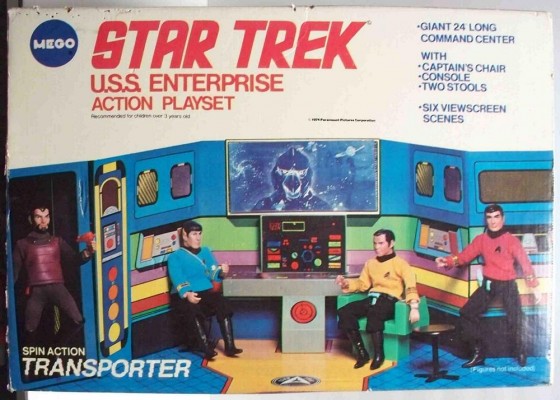 1975 and Mego strike again with this pretty spectacular little cardboard number. Back when the original series run of Star Trek had more or less… well, run its course, the movie and reruns were the main bits of entertainment for fans keeping the legacy alive. Oh, and let’s not forget toys. I was never a huge fan of Trek back in the day, but I remember finding this at a garage sale when I was younger and using it for entirely different action figures. Mine was pretty stripped and definitely didn’t have either of the, “Two Stools”. What a feature. 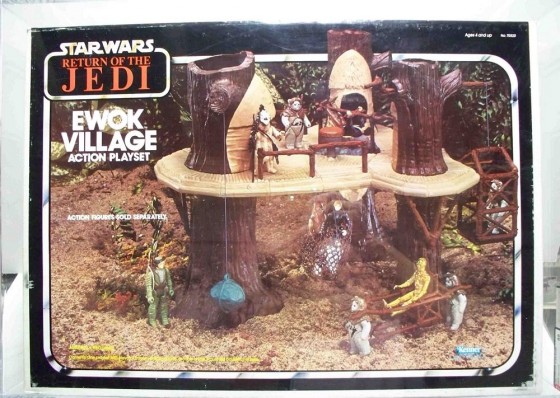 Okay so Return of the Jedi was pretty much run by a bunch of Teddy Bear Muppets, we all agree on that whether you love the movie or not. I’m not sure how I felt about the Ewoks at the time, I just remember thinking, “I’m watching yet another great Star Wars flick and this is it for the franchise, and no one, not even George Lucas himself would dare fuck this awesomeness up in 20 years!” Yep. Who knew? Anyway, the Ewok Village playset was one I fondly remember from my days as a lad because this thing was pretty damn amazing. It was Christmas that year and my grandparents got me this and man do I remember the size of that box all wrapped next to the tree… good times. No matter your opinion on the Ewoks themselves, this was a pretty complete set that included nets, rocks, all matter of plastic stick-built geegaws, and even the chair in which C-3P0 feigned Godhood. Years later this set would be reissued with a few alterations as the Robin Hood: Prince of Thieves Sherwood Forest. It lost a lot of cool cred then. And that’s saying something. 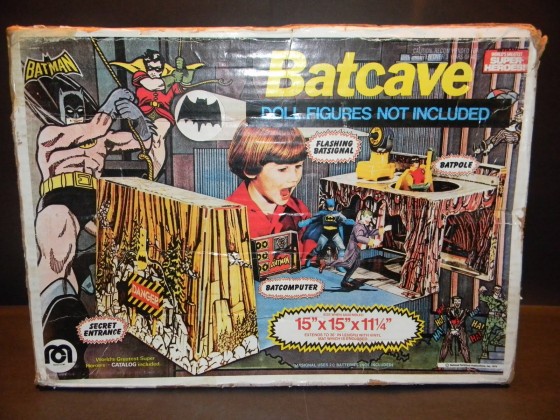 More Mego, more 70’s, and more fantastic. The Batcave Playset was a thing of beauty for its time. Sure, I’m a little too young to remember the initial run of Batman on TV, but I grew up with comics, toys, and reruns, and I had a pretty solid grasp on just how cool Batman was… and is. This was a set that was given to me by my friend whom I mentioned back at the beginning. Sure, it was worn, used, and incomplete… but it was The Batcave! Who was I to complain? Honestly, the only really disappointing thing about the set is the writing on the box: Doll Figures NOT Included. Doll figures? Come on, man? 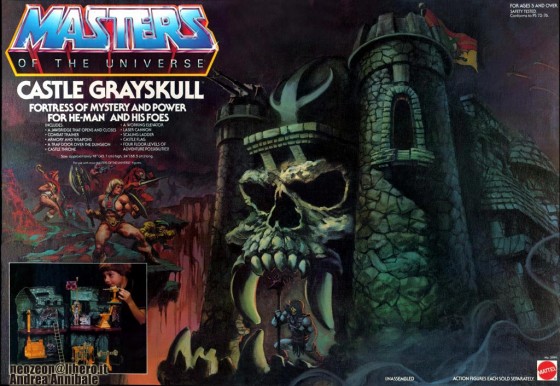 Few playsets were cooler or full of more jaw-dropping (get it? see cuz the jaw dr… nevermind) majesty of Castle Grayskull. Not only did it look fuckin’ sweet and literally command any room in which it sat, but it actually came equipped with more than just ladders. Okay, it had ladders, too, but it also had several of the following: weapons, a throne, a working laser cannon, and an elevator! One wonders why it needed an elevator and a ladder, but whatever. Also I was kidding about the ‘working’ part on the laser cannon. For that effect you needed years of practice going ‘Psew psew’ with your mouth. You put this boss tower next to your Eternia playset and you were in Masters of the Universe heaven. Mine had He-Man serving me sausages. Does that mean something?

2) The Super Powers Hall of Justice 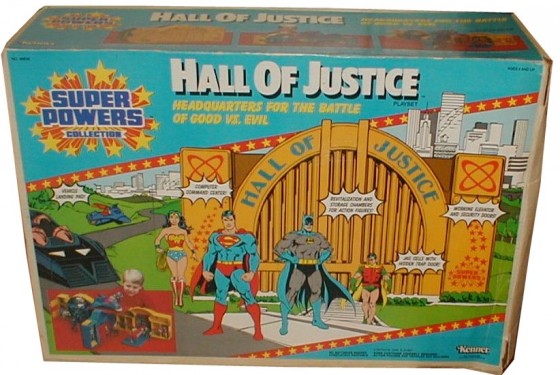 One of my favorite shows as a kid was the Superfriends show where all the major DC heroes did battle with the bad guys of the Legion of Doom. You remember: Superman, Batman, Robin, Wonder Woman, Aquaman and a few others tossed in fought off the world-conquering advances of Lex Luthor, Gorilla Grod, Captain Cold, Cheetah, and Black Manta. It was so great and played a huge roll in the toys I spent the most time with as a youth. And yes, I owned the Hall of Justice. Granted, it didn’t have much in the way of doodads and whatnot, it more than made up for in playability and straight up coolness. It was a lot of plastic and a lot of blue, yellow, and red. It was a blocky version of Superman, in other words. 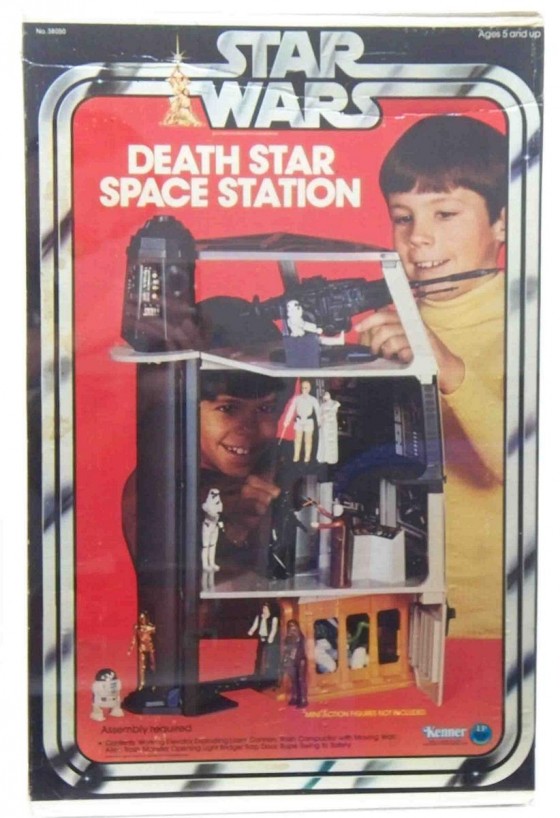 And here we have the pinnacle kids: the 1978 Kenner Death Star Space Station. Okay, fine, maybe it wasn’t a whole lot to look at and it was obviously cardboard with little in the way of actual accessories, but none of that mattered when I was 5. I got this for my birthday that year, and yeah, even if I was a bit young to really appreciate its true impressiveness, my dad made sure that I understood just what I had. You see, he introduced me to the franchise and even took me to see The Empire Strikes Back at a drive-in, which was a big deal when I was 7. Anyway, I was too young to have seen the original run of A New Hope in ’77, but my dad knew I liked what I saw on TV and even made sure I had action figures (when they were finally released to stores) and playsets with which to use them to their fullest. So yes, even though I don’t remember it new as such, I do remember having this around the house as I got older and I do remember playing with it, especially the elevator. For some reason I loved elevators. And probably ladders.