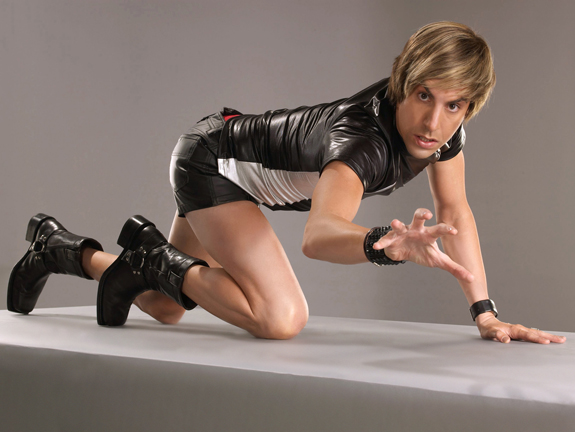 In anticipation of Bruno, Sacha Baron Cohen’s movie about a flamboyantly gay Austrian fashion journalist, I’d like to draw up a list of one thing that unites people on all side of the gay marriage/gays in the military/gay adaption/can gays vote debate, the one thing that gets the KKK and the GLAAD rolling on the floor in laughter: The homosexual buffoon in film. What’s funnier than reinforcing stereotypes?

10 Todd Cleary (Keir O’Donnell)
in Wedding Crashers (2005)
Unfortunately this guy was more creepy than funny, but he did have some good lines, particularly alongside Vince Vaughn, so he gets a spot on the list.
Funniest scene:
[Todd gets up angrily from the dining table]
Todd: I’ll be in my room, painting.
[pause]
Todd: Homo things!

9 Scott Donlan (John Michael Higgins) and Stefan Vanderhoof (Michael McKean)
in Best in Show (2000)
…and their Shih Tzu. The gay couple take great pride in their dog, and are confident that she will win the competition.

8 Johnny Henshaw-Jacobs (Stephen Stucker)
in Airplane! (1980)
Stucker was known for portrayals of larger-than-life flamboyant characters. Sadly, he died of AIDS in 1986, but not before he stole the show in Airplane and The Kentucky Fried Movie.

7 Kevin McDonough (Nick Swardson)
in I Now Pronounce You Chuck & Larry (2007)
A movie about two fireman posing as homosexuals certainly needed at least one over-the-top gay, and Swardson was it.
Funniest scene: The way he was dressed at the Halloween party.

5 Hooper X (Dwight Ewell)
in Chasing Amy (1997)
Ewell plays a gay black writer of comic books, posing as a violent militant.
Funniest scene: When he goes off on a rant about Return of the Jedi being racist.

4 Chi-Chi Rodriguez (John Leguizamo)
in To Wong Foo Thanks for Everything, Julie Newmar (1995)
Okay, I didn’t actually see this film, but I’m told Leguizamo stole the show and I completely believe it.

3 Lamar Latrell (Larry B. Scott)
in Revenge of the Nerds (1984)
For some reason I saw this R-rated film when I was a kid, before I knew what a homosexual was. I knew at the time that Lamar was odd but it wasn’t until a couple of years later did I realize why.
Funniest scene: When he was shown in slow-motion throwing the javelin.

2 Franck Eggelhoffer (Martin Short)
in Father of the Bride (1991)
Foreign AND gay. Short pulls it off with flying colors, upstaging Steve Martin and possibly the only reason this film got a sequel. Honorable mention goes to B.D. Wong, who played Howard Weinstein.
Funniest scene: Blue tuxado.

1 Albert Goldman (Nathan Lane)
in The Birdcage (1996)
Nathan Lane typically plays gay in just about everything he’s in (including the Producers, in which he played a heterosexual), but this was his funniest role. He even upstaged Robin Williams, which isn’t easy to do. Also, Hank Azaria is hilarious in this film, and some say better than Lane. Hmmm… maybe he should be number one?
Funniest scene: When he was dancing with Gene Hackman.

Honorable mention:
Seabass (Cam Neely) from Dumb and Dumber
I’m not sure if calling a male rapist a homosexual but former NHL star Cam Neely was memorable in this very brief role.