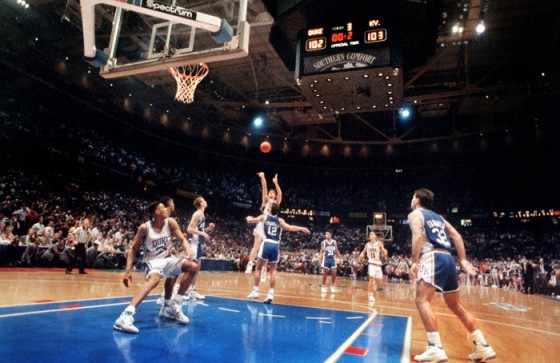 Buzzer Beaters are the epitome of the March Madness experience, and unfortunately so far we haven’t experienced any in this year’s tournament (other than that UPS commercial which is causing bitterness amongst Kentucky fans). So in hopes that we get some last second heroics over the weekend, we share some of the best of years past.

The shot is not much more than a glorified lay-up, but it’s definitely a memorable finish. And the Bruins went on to with the national title, making this buzzer beater even more meaningful. So why not rank it higher? The fact that Bruin guard Tyus Edney ran the entire length of the court, whipped it behind his back, and still managed to get a lay-up in 4.8 seconds seems more of a testament to Missouri’s poor defense than a miraculous play. But kudos to Edney for exploiting the Tiger’s ¡Ole! style defense.

This one is impressive in many ways, and not so much in others. Defending champion Louisville faced Arkansas with a spot in the Sweet Sixteen on the line. Down 73-71, Arkansas had the ball with only fives seconds left to play and the length of the court in front of them. Tyus Edney managed to go the full length of the court for UCLA as seen above. U.S. Reed showed what not to do in this situation, putzing around and only going half the distance that Edney did. Of course, that’s also all he needed to make the game-winner.

If at first you don’t succeed, try again. In this 1998 battle of the Huskies, second-seeded UConn faced off against eleventh-seeded Washington. Down by one point with ten seconds left in the game, Connecticut went for the game winner. After misses by Jake Voskuhl and Richard Hamilton, the ball is tipped back to Hamilton in the chaos and he he launches a fadeawaythat propels the Huskies, the UConn Huskies that is, to victory, 74-73.

Maryland had won the title in 2002, but lost the core of their team to graduation and the NBA Draft. No longer a powerhouse, the Terrapins found themselves down 73-72 to eleventh seeded UNC-Wilmington in the 2003 first round. On the final play, the ball is given to Juan-Dixon lite, Drew Nicholas. I especially like this shot because Nicholas hits the shot on the dead run and just leaves his follow through hand hanging. It’s so good, he’s just gonna leave his hand up there.

Fourteenth seeded and Southland Conference auto-bid Northwestern State Demons trailed the entire game, at least until a unbelievable three with under one second remaining. Iowa had missed a free throw right before the clip, making the deficit just two and giving the Demons one shot at glory. And they took it.

The “Holy mackerel!” play is part of March Madness lore. You’ll probably hear the clip play a few time this Big Dance. The play occurred in the second round battle between seventh-seeded Georgia Tech and Baby Jordan’s second-seeded University of Southern California. The Trojans led 78-76, and only 0.8 seconds stood between them and the Sweet 16. But the Yellow Jackets had one final play, with the in-bounds pass coming near half-court. What happened? A miracle three-pointer from James Forrest, who hadn’t hit a three all year.

Valparaiso’s Bryce Drew was the coach’s son, so you know expectations were high. Presented with his big moment, the kid missed a go ahead three as time wound down. Mississippi star Ansu Sesay got the rebound and was fouled. However, he missed the front end of the one-and-one, giving the ball back to the Crusaders. That left Drew and Valpo with 2.5 seconds to go the length of the floor with no timeouts. The hook and lateral play, dubbed “Pacer,” was executed to perfection and Drew stunned the Rebels with a last second three.

Yes, Connecticut again. As a kid, I had given up on this game. I was rooting for UConn, mainly because they were one team that would beat the hated Georgetown Hoyas. Unable to watch on television, I was listening to the call on the radio on my way home that Thursday night. Clemson hit two free throws with 1 second left to take a 70-69 lead. Pissed off, I turned off the radio figuring Clemson had won. Hours later while watching the nightly news, I found out that Scott Burrell had heaved a long pass to Tate George, who hit a turn-around jumper to win the game. My favorite part of the clip is the UConn Huskie sprinting out onto the court right after the basket. Although after the Devendorf controversy, I think they might have waived this one off if replay existed.

The setting was the 1985 NCAA Championship, where Jim Valvano and the Cardiac Kids were heavy underdogs to Houston’s Phi Slama Jama, led by then Akeem Olajuwon and Clyde Drexler. With the scored tied late, State’s Derek Wittenberg attempted a game winning shot, only to airball right it to team Lorenzo Charles. Thankfully, Charles slammed it home for the national title. Coach Valvano runs wildly on to the court and Wittenberg can claim it was all planned out that way.

It’s simply the most famous shot of the NCAA Tournament. With 2.1 seconds remaining in overtime, Duke trailed Kentucky 103-102. And remember, this was a Kentucky team coming off probation without much star power outside of Jamal Mashburn. So there was a bit of a David vs. Goliath factor to it. Grant Hill lobs a perfect pass 3/4s the length of the court to Christian Laettner, who faked, dribbled once, and hit a turnaround jumper as time expired. Of course he made it, Laettner didn’t miss a shot all game. And thus ended one of college basketball’s greatest games. The only sour part is that Goliath won.

I really hate Duke, but even I must admit this moment is remembered throughout college basketball (and famously recreated by Chris Farley). And I must say, it’s not a bad way to be remembered. To make the shot even more memorable, Duke went on to capture the  national title. Without this shot, that’s one less Duke championship. Oh, and bonus points for the Thomas Hill face.