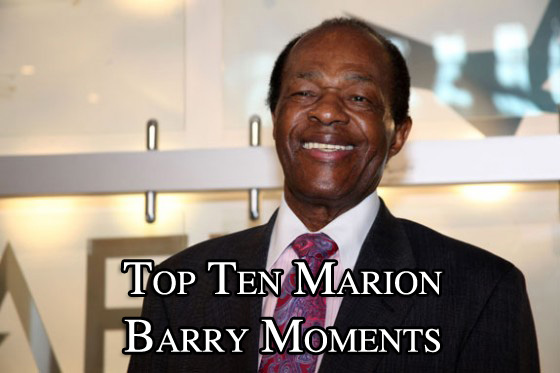 No matter what you think of Washington D.C.’s ‘Mayor for Life’ Marion Barry, you have to admit he has made things interesting over the years. I can’t think of any other politician who has been in the news for so many odd things, sometimes good, often bad, and often for such silly reasons that only Barry could have been involved. With the news breaking this evening that Barry has passed, we thought we would revisit this article that we originally published in 2009…

For those of you who don’t know him, he was the second elected mayor of Washington D.C. from 1979 to 1991. After a sting operation caught him smoking crack in a hotel room, Barry served six months in a federal prison, but was elected to the D.C. city council in 1992 and was reelected mayor in 1994. Most recently, Barry again served on the city council. Other things about Barry: He earned a Masters of Science in organic chemistry from Fisk University, and is featured on HBO’s “The Nine Lives of Marion Barry.”

Let’s take a look at ten of his most interesting moments.

Barry was chosen as one of fifty wax statues for the opening of Washington D.C.’s Madame Tussauds Wax Museum. D.C. residents and tourists picked him over Cal Ripken, Al Gore, Denzel Washington, Carl Bernstein (who would have made a terrible wax figure), Halle Berry, Martin Sheen, Marilyn Monroe, Nancy Reagan and Oprah Winfrey.

The ladies must love his dancing:

During his 2008 reelection campaign, Barry told the city’s largest LGBT political group, “I don’t think you should make [supporting the bill] a litmus test. But if a bill like that were to come up, I would vote for it.” In 2009, Barry voted against a bill committing D.C. to recognize same-sex marriages performed elsewhere. Councilman Phil Mendelson said he was surprised because Barry had signed on as a co-introducer of the bill. Barry says the local African American community is overwhelmingly opposed to gay marriage, “All hell is going to break loose. We may have a civil war. The black community is just adamant against this.”

The police pulled over Barry for driving too slowly. After looking up Barry’s record, the police told Barry that his license had been suspended and ticketed him. Turns out, it was a computer glitch and Barry’s license hadn’t been suspended.

Barry was arrested after his ex-girlfriend, political consultant Donna Watts-Brighthaupt, claimed he was stalking her. Barry was charged with “misdemeanor stalking.” However, all charges were dropped.

The bitch set him up:

Barry was stopped by police after stopping at a green light and running a red light. Smelling alcohol, the officers had to bring him in for a breathalyzer test. The officers gave Barry a ticket for running a red light and for failing to submit to a urine analysis. He was also charged with driving an unregistered vehicle and misuse of temporary tags. A judge found him not guilty for driving under the influence.

Barry pleaded guilty to charges of failing to pay federal and local taxes stemming from an IRS investigation. The mandatory drug testing for the hearing showed Barry as being positive for cocaine and marijuana. He was sentenced to three years probation and underwent drug counseling.

While serving on the D.C. city council, Barry was shot by radical Hanafi Muslim terrorists – a breakaway sect of the Nation of Islam – when they overran the District Building.

Barry was arrested with a former girlfriend, Hazel “Rasheeda” Moore, in a sting operation at the Vista Hotel by the FBI and D.C. Police for crack cocaine use and possession.

Kids, smoking crack isn’t a big deal, because you can still grow up to be mayor.

Chris Rock will play us out (probably NSFW):