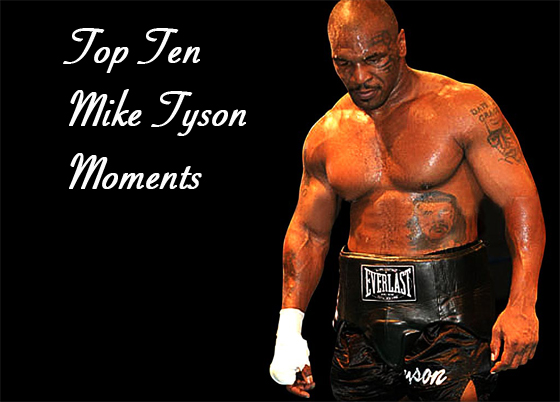 Mike Tyson is one of those people who can’t seem to stay out of the news. Like D.C. politician Marion Barry, rarely do a couple of months go by without some sort of headline relating to him, usually for negative reasons. The past two decades have shown us that Tyson is one of the most complex and troubled athletes out there. In 2005, he was quoted in USA Today: “My whole life has been a waste – I’ve been a failure.” Strong words from a person once known as the baddest man on the planet. Now let’s look at some of the most memorable moments that Tyson provided us, and we’re hoping for many more. Hopefully all good ones.

This shows the humane side of Mike. I’m guessing that he cares a lot more for his 350 pigeons than he does most people.

Tyson served nine months in prison, fined $5,000, and ordered to serve two years probation and perform 200 hours of community service for assaulting two motorists after a traffic accident in 1998.

Tyson singing Phil Collins’ In the Air is utterly hilarious, and nice to see that Iron Mike has a sense of humor.

Tyson beat Andrew Golota in round three after Golota refused to continue after his jaw was broken. The result was later changed to no contest by the Michigan State Athletic Commission after Tyson refused to take a pre-fight drug test and then tested positive for marijuana in a post-fight urine test.

6
Every Interview He’s Ever Done

Tyson never fails to top himself every time he is being interviewed.

Tyson makes quite a scene at a press conference.

Tyson was arrested for the rape of 18-year-old Desiree Washington, Miss Black Rhode Island, in an Indianapolis hotel room. Tyson served three years in prison, during which he converted to Islam.

Many consider this match to be the pinnacle of Mike Tyson’s career. Previously unbeaten, Spinks would never fight professionally again.

Betting odds on Tyson were 42/1 for this fight, held in Tokyo. ESPN notes this as the fourth biggest upset in modern sports history, behind Villanova beating Georgetown in 1985, Super Bowl III, and the Miracle on Ice.

Yes, this is the number one moment.