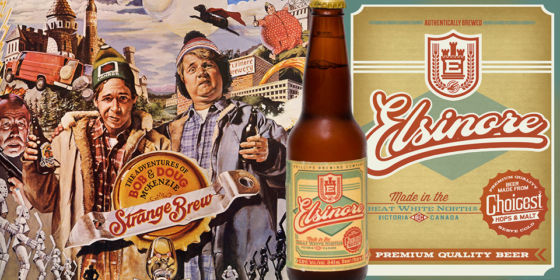 Two of my favorite things in the entire world are beer and movies. If I were a Brewmaster, I’d also take every opportunity to mix the two. The Elsinore Beer above is a bit too obvious though. Here are the Top Ten Movie-Inspired Beers, ranked fairly arbitrarily on quality of beer, quality of movie reference, and quality of label : 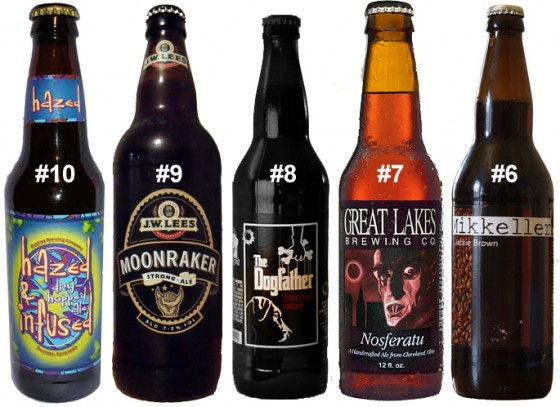 When it’s time for a night of kicking some ass and drinking some beer, Hazed & Infused is a fine choice. Boulder Beer out of Colorado brings us an unfiltered (the haze) and dry hopped (the infusion) pale ale that’s a bit fruity, kind of like most freshmen. Unfortunately, this one only comes in at #10 as it was probably more inspired by the tune than the movie.

J.W. Lee exports this winter ale to us from the UK, where it’s illegal to say anything negative about James Bond. Luckily we’re in the good ‘ol U.S. of A., where we’re free to say that Moonraker is the crappiest 007 film of all time and this decent, malty brew should be served neither shaken nor stirred.

Although Snoop beat them to the name long ago, The Dogfather imperial stout from Idaho’s Laughing Dog Brewery does not deserve the kiss of death. Scoring a 98 out of 100 on RateBeer.com, this pitch black, roasty stout is worth seeking out, but since it’s released in very limited quantities every November, it may be harder to find than Luca Brasi.

A beer called Nosferatu could only be blood red in color and this American strong ale fits the bill color-wise, but would a creature of the night enjoy fruity overtones in its beer? Probably not, but you’ll be passed out in no time as the smoothness masks the 8% abv, rendering you another vulnerable victim of Count Orlok, whose teeth probably could’ve opened bottles just as easily as veins.

Big points to Danish brewery Mikkeller for tributing one of Tarantino’s least popular movies and for shouting it out directly on their website. Minus points though for uninspired label art and high price. The tasty brown ale itself though is enough to shut my raggedy ass up. 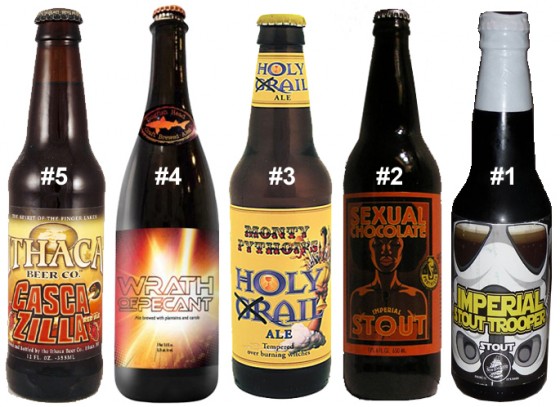 The name plays off of the local Cascadilla Gorge, the mass quantities of Cascade hops and our favorite fire-breather, Godzilla, who gets a little love on the label. Although from upstate NY and not Japan, this Red IPA would kick King Kong’s ass any day of the week.

Dogfish Head has a great history of great beer names, label art and an off-centered approach to everything they do. This Star Trek (add points) referencing brown ale was brewed one-time only in a collaboration with a website (minus points for not being us), using d-list foods like plantains and carob with malt smoked over pecan wood. Originally called Wrath Of Pecan, they were forced to change the name not by the Rodenberry estate, but by the liquor authority, who complained there wasn’t any actual pecans in the beer, thus the pecan’t. Either way, high marks for the label, pun and opportunity to do an impression of Shatner, if he was allergic to tree nuts, “Pe-Caaaaannnnnnnn!”

There are a lot of Holy Grail beers out there but only one is authorized by the legendary Monty Python. While the bitter beer itself kind of sucks, the fact that it’s officially branded, has Terry Gilliam’s art on the label and proclaims itself ‘Tempered over burning witches’ right on the label shoots it right up to #3.

Referencing a hilarious, yet brief scene from the underrated comedy Coming To America, Sexual Chocolate from Foothills Brewery in North Carolina will make your soul glow. Scoring a perfect 100 and an A- on the big two beer sites, this 9% abv with notes of chocolate, toffee, coffee and dark fruit is fit for kings and queens. Mikkeller’s Jackie Brown should learn something from this Obey Giant meets 70’s blaxploitation label (“Yes, In The Face!”). Very sought after in the beer geek community, Sexual Chocolate could be better than a hot tub full of topless chicks.

The mother of all movie-inspired beers, Imperial Stout Trooper is not only a Star Wars-inspired beer, but every original bottle is now a collector’s item. How’s this for ballsy- New England Brewing Co. went ahead and made this outstanding beer with its beer goggled, storm trooper helmeted label without the consent of the Lucas camp (aka The Dark Side). You know it was good because they tasted some and only sent a cease-and-desist instead of an all-out lawsuit. Touting 99 and A ratings, I can tell you first-hand that this is the best imperial stout I’ve ever tasted from here to Tatooine.