“Be not afraid of greatness. Some are born great, some achieve greatness, and others have greatness thrust upon them.” – William Shakespeare

The true definition of greatness is the quality of being great and in college football, there are teams, year after year, that reach that level of play and those teams become the best teams of all time.

But how do you choose ten? Because we can honestly give you 100 teams but you would skip right to the top ten anyways, so we are cutting out the middle men and getting right down to the reason you came here, to see which collegiate football team had the greatest season ever.

The list we worked on was stupid long and featured so many talented teams that it hurts us to choose the ten below and leave them off. Teams like the ’61 Alabama Crimson Tide, the ’96 and ’97 Nebraska Cornhuskers, the ’05 USC Trojans (forget about the sanctions and penalties), and the ’68 Ohio State Buckeyes did not make the cut. All of those teams are amazing and are among the best, just not the top ten.

Enough with the commentary already, let’s get to the freaking list. Here are our ten best teams in college football history. 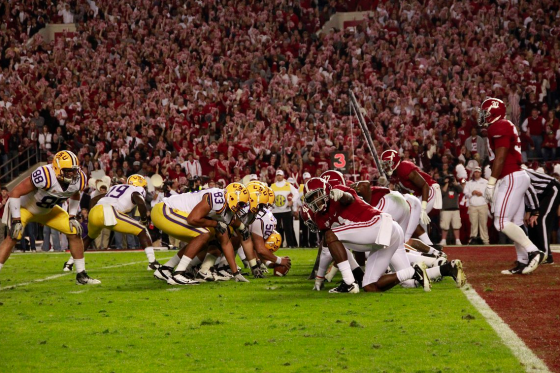 If Alabama doesn’t destroy the Tigers during the BCS Title game, the 2011 Tigers would be ranked in the top 2, that is a fact. They were completely dominate from their week 1 take-down of the high-scoring Oregon Ducks offense, through the game of the century against Alabama in November, to the SEC Championship. Then something happened that no one can explain and the Tigers failed to show up against Nick Saban’s Crimson Tide in the only game that truly matters, the title game. They held the number one ranking for 11 weeks, after they beat West Virginia on the road. It is truly sad to see one of the all time greatest regular seasons go down in flames because of how badly they lost the BCS Title game so we wanted to show them respect since everything they did prior to the rematch against Bama was amazing. 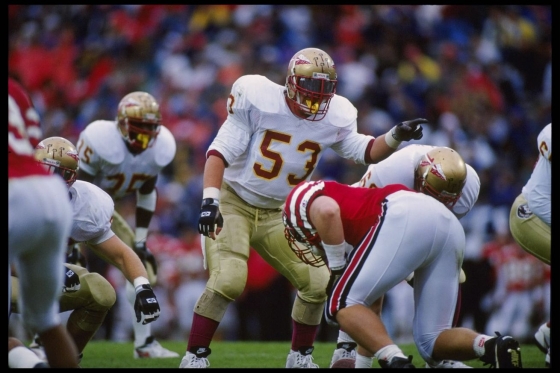 Ever wondered how Mark Richt got the head coaching job in Georgia back in 2001? It was because of what he did with the Seminoles during their National Title run in 1999 when he was their Offensive Coordinator/QB coach. He turned Chris Weinke into a leader and the 2000 Heisman trophy winner. Weinke! But it wasn’t like Weinke didn’t have talent around him, he had plenty at his disposal. Peter Warrick, Laveranues Coles, Anquan Boldin, Travis Minor, Corey Simon, Sebastian Janikowski, Mario Edwards, and Derrick Gibson were among the many future NFL players that were a part of the amazing team. The 1999 Seminoles hold the record for longest weeks holding the top spot in the AP poll, as they were preseason favorites and remained atop the poll for 16 weeks. 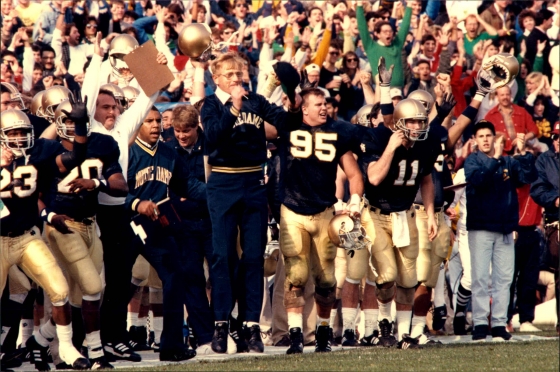 On paper, the ’88 Fighting Irish weren’t supposed to walk away with the title. They began the season 13th in the AP Poll and had one of the toughest schedules ahead of them, which no critic or fan imagined they could run through like they did. It began in week one when they upset Michigan in South Bend 19-17. Then, just a few weeks later, they faced the top ranked Miami Hurricanes, led by Steve Walsh. That game ended up one of the all-time greatest ever played and it turned Notre Dame into a true contender with #2 USC still to come. The defense held opponents to 13 points a game, 3rd in the country, and only gave up 103 yds/game. If defense truly does win championships, then Notre Dame proved it in 1988. 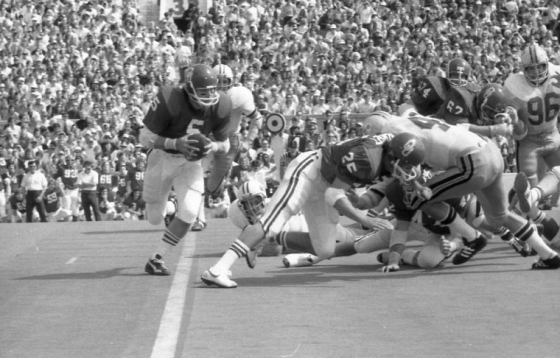 Up until 1974, no team had more than seven All-Americans on their roster. The ’74 Sooners had eight including the loaded backfield of Joe Washington, Jim Littrell, and QB Steve Davis. This team took running the ball to a whole new level and still owns the record with 73.9 rushing attempts per game. They also own the record for most rushing first downs per game with 21.4. But an offense is only as good as its’ defense and the Sooners had a stout, tough, run-stuffing defense that held opponents to only 3 points per game, 2nd in the country. They had three shutouts and only gave up 14 points three times, never a point more. It was only Barry Switzer’s second year coaching and he had already turned the Sooners into a dominating force and undefeated national champion. 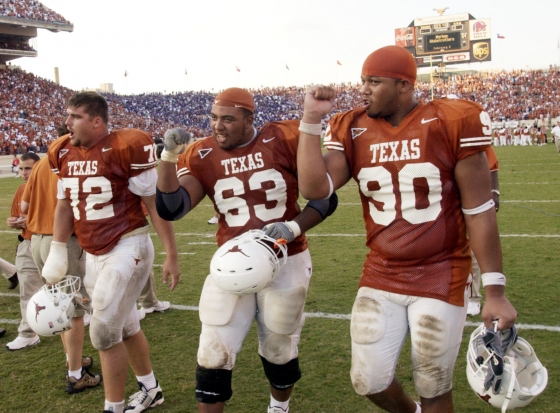 When Vince Young was in high school, he was bigger than LeBron James in the Houston area, he was a celebrity that wasn’t even old enough to buy cigarettes yet. When he got to UT, it did not take long for Mack Brown to start using the Freshmen and after his first season, he had already 2,153 yards of offense (998 rushing) and 17 TDs. Young improved his passing game a little bit in his second year at Texas and that was when it stuck him. If he could be a dominate passer, no one could stop this team. So in 2005, his junior season, he hit his stride and threw for 3,036 yards with a 65.2 completion percentage, 26 TD, and only 10 Int. But he also ran for 1,050 yards and 12 more TDs. He helped the 2005 Texas Longhorns become the most dangerous offense in school history averaging 50.2 points per game and 512.1 yards per game. They took that amazing offense to the Rose Bowl where they upset the favorite USC Trojans in one of the best national championship games ever. 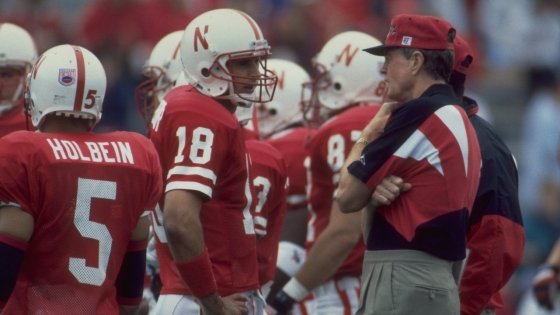 Not only did the 1995 Nebraska Cornhuskers dominate the weak teams on their schedule, they also destroyed the ones ranked in the top ten having beaten #8 Kansas State, #7 Colorado, and #10 Kansas by a combined 85 points. But let’s continue proving why they were so great. They trailed for only 8 minutes, all season long, Tommie Frazier was never sacked, not even once, and they had the top ranked offense and the 4th ranked defense in the nation. Oh, and don’t forget about the 62-24 destruction of the #2 Florida Gators in the Fiesta Bowl. 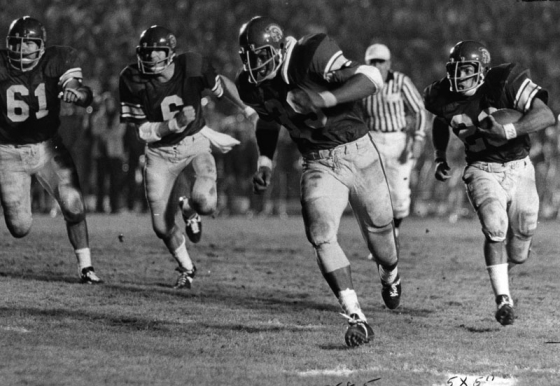 Right out the gate, the ’72 USC Trojans traveled to War Memorial Stadium to face the #4 Arkansas Razorbacks for the first game of the season where they went on to manhandle them, 31-10. They did that a lot during the season as they had road wins against #15 Standford (30-21) and #14 UCLA (24-7). They just could not be stopped and easily went on to defeat Ohio State in the Rose Bowl to become the consensus National Champion that season. 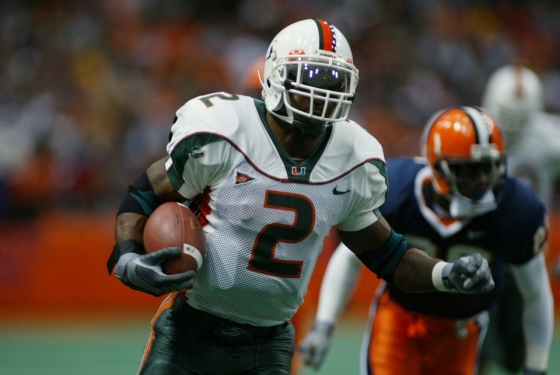 If not for a faulty BCS computer ranking, the 2001 Miami Hurricanes could have been playing for back-to-back titles in 2001. Instead, they got slighted in 2000 and ended up using it as motivation to prove everyone just how wrong they were. This team was loaded with future NFL talent. Ed Reed, Clinton Portis, Andre Johnson, Jeremy Shockey, Bryant McKinnie, and Jonathan Vilma were all a part of that amazing season. All they did was score touchdowns on offense and shutout opponents on defense. 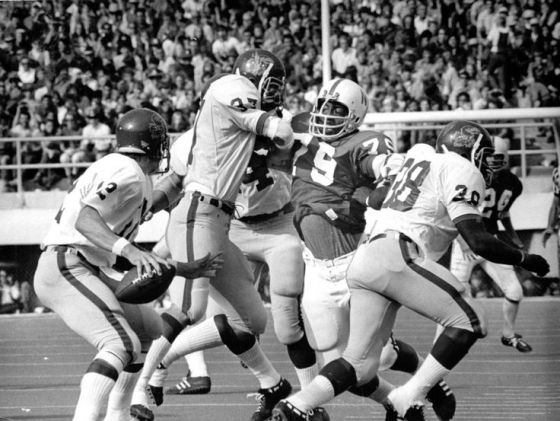 Before LSU-Alabama in 2011, the original “Game of the Century” happened back in 1971 when Nebraska took on Oklahoma on Thanksgiving Day, in front of 55 million television viewers, a record at the time. It was the Cornhuskers that won 35-31. Tom Osbourne wasn’t the head coach yet, but he was the mastermind behind the offense back then. Statistically, this was one of the all-time best teams, that is until 2008. 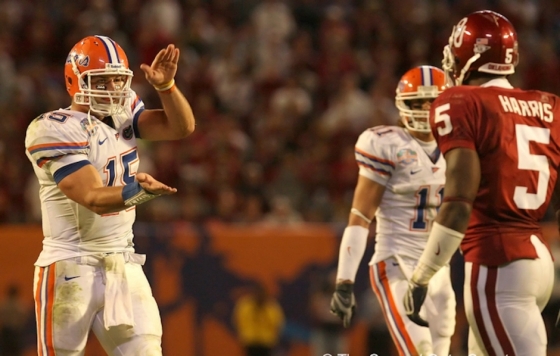 It is not hard to figure out the top five but once you get into the top five, things start to get even harder for us to choose. The 2008 Florida Gators helped make it easier simply because of how good they were after losing to Ole Miss 31-30 in late September. Tim Tebow then made a promise that things were going to change and upsets weren’t going to happen again. Over the final 10 games of the season, the Gators outscored opponents 469 to 131, and that is counting the SEC Championship against #1 Alabama and in the National Championship game against #2 Oklahoma. Even with one loss, this team is better than any other undefeated team, ever.