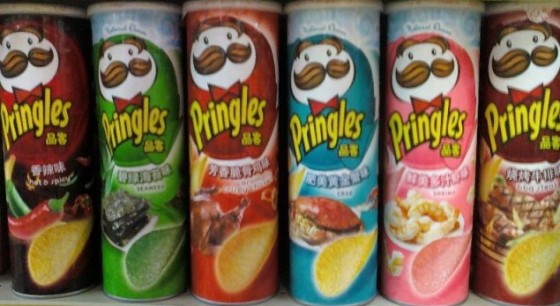 Gunaxin Media’s Foreign Correspondent here, reporting once again from China’s land of mystery. The subject this time? The title up above says it all- The Top Ten Flavors of Pringles Potato Chips in China. You might not think it when you are snacking on your favorite Pringles flavor over there in the western world, but over here, they have different ideas about what a Pringles chip ought to taste like, and I tried them all. That said, here’s the ten best. 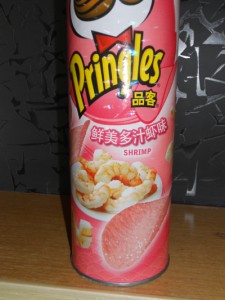 Bubba Gump is rolling over in his grave. “Anyway, like I was sayin’, shrimp is the fruit of the sea. You can barbecue it, boil it, broil it, bake it, saute it. Dey’s uh, shrimp-kabobs, shrimp creole, shrimp gumbo. Pan fried, deep fried, stir-fried. There’s pineapple shrimp, lemon shrimp, coconut shrimp, pepper shrimp, shrimp soup, shrimp stew, shrimp salad, shrimp and potatoes, shrimp burger, shrimp sandwich. That- that’s about it. Oh wait, Pringles Potato Chips too.”

These taste okay if you like the taste of shrimp, because they nailed it. They really do taste like they say they taste- they taste just like shrimp. And the chips are the same shade of pink that the can is. No kidding! 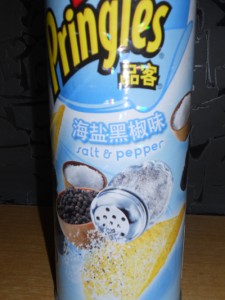 You know how in the west it’s standard to have a salt and pepper shaker on every dining room table? Well, over here in China, they don’t do that. I’ve never seen shakers on any of the tables I have eaten at. These Pringles may very well be the only taste of this zesty combination the fine people of China ever experience. If that’s the case, then hats off the Pringles people for bringing that to the east. The over taste though? Tastes like salt. Tastes like pepper. Not too exciting. 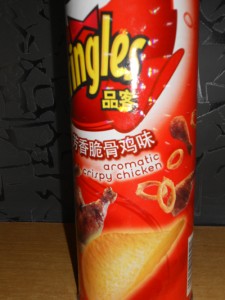 I was skeptical when I saw these in the store. “Okay.” I said. “Maybe it tastes like crispy chicken. But there is no way, there is NO WAY! They are going to get it aromatic.” Boy was I wrong! The first thing you notice when you open the can of these Pringles is, you guessed it- the aromaticness of it! So good! It took me back to my childhood. Oh the memories of dad toiling in the fields, plowing the land to plant corn while mother was in the kitchen, roasting for the family dinner, a crispy chicken, it’s aroma filling the house while my brother and I played Pele’s Soccer on the Atari 2600. On the radio? Why, Ernest Tubb of course, singing Walking the Floor Over You, courtesy of WKCW, 1500 on the AM dial coming at you from Warrenton, Virginia- The Big K. Xie xie Pringles for inspiring that memory, but why did I have to travel half way around the world to experience it? 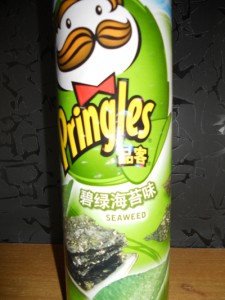 I spent a good portion of 2009 in South Korea. Seaweed is a popular snack item there. I used to buy sheets of it in the store. It tasted good. They sell it in a lot of stores in Hawaii as well. Maybe they sell it in other parts of the USA too, I don’t know. It’s been so long since I spent any real time there. Anyway, Seaweed flavored Pringles! So good! 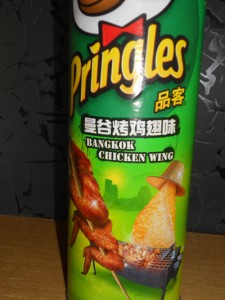 I have not yet been to Thailand, but I have more than my share of friends who have been there. The one thing they all talk about is the chicken wings they ate while there. The way they describe them, they sound like they must pretty much be the taste of Heaven. If these Pringles are anywhere near as good as what my friends have described, then I guess Heaven ain’t such a bad place, because these chips are good! 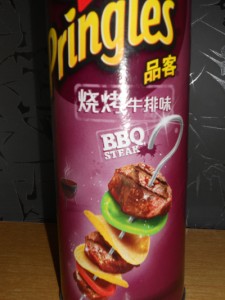 Mmm. Barbecue. I don’t really taste the steak flavor so much, but this is a world where American style barbecue flavor isn’t a big thing. Sure, there’s American style barbecue sauce in the foreign section of a few of the stores, next to the Heinz Ketchup, but there very little variety. So, to have a barbecue flavored chip like this is a nice taste of home to a good ol’ boy like me. 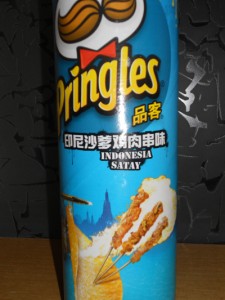 Do you like onions as much as I do? Let me give you a hint, I like onions a LOT! If you do, you will really like these Pringles. They taste so much like onions grilled over on open fire. Seriously. How close is this to authentic Indonesian cuisine though? I have no idea. I’m just telling you what they taste like for real. 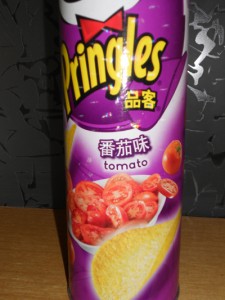 Seriously, you could crumble these chips over a plate of spaghetti, sprinkle on some Parmesan cheese, and you would have no need of spaghetti sauce. It tastes that much like a real tomato. These chips are good. Seriously, good! 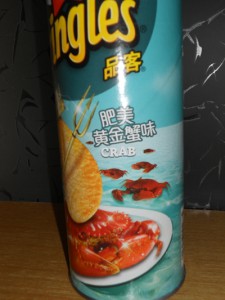 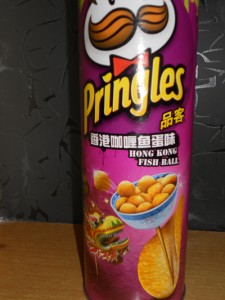 These taste like Old Bay Seafood Seasoning. So, if you try Crab flavored, and are disappointed, don’t worry. There is always Hong Kong Fish Ball flavor. I’ll say it again because it makes me laugh every time- Hong Kong Fish Ball.