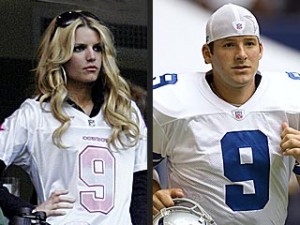 Welcome to Dumpsville. Population: You. MTV, among various sources, is reporting that Dallas Cowboy quarterback/pretty boy Tony Romo has dumped girlfriend/airhead/future Goodyear blimp Jessica Simpson. The timing apparently couldn’t have been better, as the guillotine dropped on the relationship last Thursday, the eve of Simpson’s 29th birthday. And it totally ruined the Barbie and Ken-themed party Jessica had planned. Although because Romo is a eunuch like Ken, it might have been apropos to continue with the party anyway. Here are Gunaxin’s Top Ten reasons for the split:

10. Romo got tired of the package deal of dating Jessica and her creepy, face of sheer evil dad. He didn’t sign-up for that crap!

9. Nick Lachey decided he needed to be relevant again. Start the reunion rumors.

8. Simpson needed to add relationships to her résumé of failures, which already includes movies and music (you know, because you don’t own her songs and don’t watch her movies, although I’m waiting with bated breath for that Steve Guttenberg project).

7. Tony Romo finally came to his senses after realizing Simpson was deficient in common sense, vapid, obsessive with drugs and booze, and cost too much. Besides, no one wants to be related to Pete Wentz.

6. Simpson couldn’t keep up with Romo’s slutting around like a pseud-star.

5. The entire relationship, much like Romo’s career, started off great but faded quickly.

4. The lesson here? When you’re a no-talent shell of a celebrity with absolutely nothing going for you aside from your kicking body, don’t lose that body. Otherwise people like Tony Romo will hit-it and quit-it. Even Obama’s piling on:

3. Tired of being sacked again and again, Romo took it upon himself to avoid it this time. Though he still intends to spend next year on the Injured Reserve with a “Broken Heart”.

2. It was getting weird as Romo began to be known as the pretty one. When you’re young, rich, good looking, and the starting quarterback for America’s team, you shouldn’t have to date fat chicks.

1. Romo isn’t very good at getting birthday gifts. They’re hard. Guess the present he wanted to give most was himself out of the relationship.