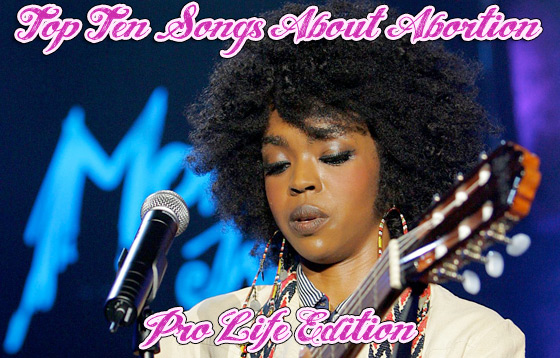 There’s a common misconception that anti-abortion folks are all right-wing Christians who protest by bombing clinics. Wrong. They’re also singers (NOTE THE SARCASM). Rappers, reggae, heavy metal, folk, R&B, gansta rappers, you name it. And a few have written some fairly decent songs (while others have penned lousy songs that didn’t make the list.) Taking into account only how good the song sounds, here are the Top Ten Songs About Abortion: Pro-Life Edition.

An explicit rap song about how the group believes abortion needs to be stopped.

A song that asks women considering abortion to rethink their decision.

In the Line of Fire
Dogwood

A song from the Christian punk band that provides a narrative from the fetus’s point of view.

Abortion Is a Crime
Alpha Blondy

A reggae song about how all humans have a right to life.

A Christian rock song about the band’s opposition to abortion.

A song about a shell-shocked Vietnam War veteran who finds out his girlfriend had an abortion without telling him.

A song which features the dialog of an aborted fetus. Probably not real, though.

Well, of course Creed put out an anti-abortion song.

A song about how Common and his girlfriend found themselves facing an unplanned pregnancy and opted against abortion.

A song in which a man apologizes to the child he might have had if not for an abortion.

“A Baby’s Prayer” by Kathy Troccoli
A song in which a child in heaven asks God to forgive his or her mother for having an abortion.

“Burden In Your Hands” by Underoath
A song in which Underoath elaborates upon their pro-life position on abortion.

“Hellbound” by The Breeders
A song about a fetus who survives an abortion.

“Little Ones” by Phil Keaggy
A song in which the singer pleads for people to stand up for the rights of the unborn.

“Abortion” by Doug E. Fresh & the Get Fresh Crew
A pro-life old school rap song that describes abortion as a “distortion” and states the “world’s morals are out of proportion.”

“Silent Scream” by The Crucified
A pro-life song that asks “Does only God and my heart hear the baby’s silent scream?”

“Abortion Is Murder” by P.O.D.
A song that appears as a hidden track on the album Snuff the Punk.

“To Zion” by Lauryn Hill
A song about how Hill chose to give birth to her son Zion despite being advised to have an abortion on account of her music career.

“Mazohyst of Decadence” by Dir En Grey
A song written to be an account of abortion told from the perspective of the fetus.

“Children Can Live Without It” by DC Talk

“Silent Scream” by Slayer
This song is about abortion. The first chorus says, “Silent scream, burying an unwanted child, beaten and torn, sacrifice the unborn.”