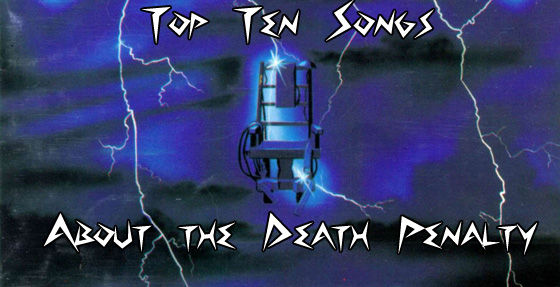 The death penalty, relatively speaking, doesn’t happen too often, when comparing the number of qualifying crimes committed to the number of people executed. There are various reasons why, including the exhaustive appeals process. But this hasn’t stopped stop our favorite bands from writing songs about being executed, and we’ve been rocking to them for years. So death penalty opponents need to make a choice here – would they rather let murderous criminals live, or would they rather jam to these songs? I vote for the latter. And even if some of these songs have an anti-death penalty message, they’re still about the subject and wouldn’t exist if it weren’t for government executions. If we missed your favorites, name them in the comments.

Written by Shel Silverstein and sung by Johnny Cash At Folsom Prison and The Brothers Four. Also Joe Bean.

The Mercy Seat
Nick Cave and the Bad Seeds

This song, also performed by Johnny Cash, describes a man being executed via the electric chair who maintains his innocence until he is about to die, when he admits to his guilt.

It began when they come took me from my home
And put me in Dead Row,
Of which I am nearly wholly innocent, you know.
And I’ll say it again
I..am..not..afraid..to..die.

This song is flat-out wrong. There are no 16-year-olds on death row. But I don’t think 2Pac cared, as this was a posthumous album called ‘R U Still Down? (Remember Me)’.

This is from the completely overrated movie of the same name, which is about a racist idiot, played by Sean Penn, who is on death row and consoled by a nun, Susan Sarandon.

But I’m not the man.
He goes free as I wait on the row for the man
to test the rope he’ll slip around my throat… and silence me.

Sorry, we couldn’t find a video for this, but it’s a killer song. Get it?

Metallica’s album of the same name features this song about the electric chair.

Guilty as charged
But damn it, it ain’t right
There’s someone else controlling me
Death in the air
Strapped in the electric chair
This can’t be happening to me

This is a centuries old folk song, popularized by Lead Belly, which has seen several cover versions, including Led Zeppelin’s, which sounds the best.

Hallowed Be Thy Name
Iron Maiden

This is number one on the list because the song is a musical masterpiece.

When the priest comes to read me the last rites,
I take a look through the bars at the last sights,
Of a world that has gone very wrong for me.
Can it be that there’s some sort of error?
Hard to stop the surmounting terror.
Is this really the end, not some crazy dream?
Somebody please tell me that I’m dreaming,
It’s not easy to stop from screaming,
But words escape me when I try to speak.
Tears flow but why am I crying?
After all I’m not afraid of dying.
Don’t I believe that there never is an end?