Top Ten Songs to Fight To 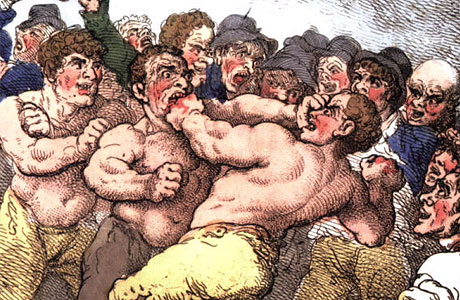 From Penguin Classics' edition of Hazlitt's essay, "The Fight."

I’m one of those people who is ready to get into a fist fight at just about any time. But there’s one thing that would pump me up and get me going that I typically need when I get into it with someone – a good fight song. So, looking through my iTunes collection, I found ten good ones that I wouldn’t mind hearing in the midst of a rumble.

I don’t even like Limp Bizkit (one of the most overrated bands of the 90s) but this song certainly makes me violent.

A bit of a different genre than the rest of this list, but this classic gets it done.

From this masterpiece of an album, I could also go with “Breathe.” Someone suggested to me “Get up, get off” as well.

Every time this song even comes on I want to punch someone. Prior to this song coming out, it would’ve been “One Step Closer.”

Zombie has so many but I’d say this one rises to the top. This song is frequently heard at sporting events, as well.

Other suggestions from Slipknot. “Spit it out” (OverCaffeinated Mix) and “People = S#%t.”

It begins kinda slow but once it hits the meat of the song, I’m throwing round-houses like Tyson.

Also could go with “Awake.”

I love this band, and the part where he goes off on a rant is a soundtrack to any good fight ever fought.

Okay, this one is cheesy, but it’s simply the best! It was written at the request of Sylvester Stallone for the film Rocky III.

Other songs worth a nod:
The Fight Song – Marilyn Manson
Superstar – Saliva
Bodies – Drowning Pool
Payback – Slayer
Got the Life – Korn
B.Y.O.B. – System of a Down
Rot – Mushroomhead
Bwomp – Mushroomhead
T.R.I.C. – Otep
Beat It – Michael Jackson (Great fight song for when we were kids)

Did I miss any of your favorites? Let me know in the comments section, and then we can fight about it!