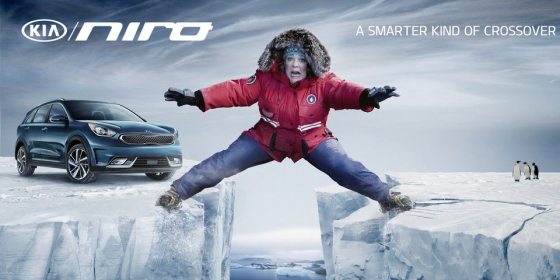 Super Bowl 51 was noticeably loaded with automotive commercials. Nearly every break featured at least one spot from a manufacturer, and the landscape was very competitive this year. There was a noticeable difference from traditional football advertising however. Mostly gone were the heartland male-focused commercials for trucks and cheap beer, and in their place was more of a focus on appealing to a younger, more liberal and diverse audience.

The advertisements themselves were as diverse as the companies they were pitching for, but at the end of the night, some clear winners rose to the top for us. Below are our Top Ten Automotive Commercials from Super Bowl 51, which this year only included two from American companies. Did we miss one of your favorites? Do you disagree with our order? Let us know via social media.

This spot was directed by the Coen Brothers and features a gorgeous vehicle, which alone should be enough for a higher ranking on our list. Entitled “Easy Driver” and starring Peter Fonda, it’s an obvious homage to 1969’s classic film, Easy Rider. This commercial was aimed squarely at Baby Boomers and since we’re too young to qualify, it missed that nostalgia mark with our audience.

We love the brand and the vehicles, but we’re still not convinced that folks in the Lexus marketing department really understand what the American audience expects from a Super Bowl commercial. This commercial is slick, impressive, and totally on brand. Unfortunately it’s just lacking that special quality that would help it get noticed in a sea of other new commercials premiering on Super Bowl Sunday.

Michelin knows what makes their customers buy new tires, and went straight for the emotions related to that purchase. Drivers need something reliable that will get them home safely to their family, and this 30 second spot is aimed squarely at your peace of mind. It’s simple, but works because it makes us feel.

Alfa Romeo clearly dumped a ton of money into making an impact during this Super Bowl, running three different commercials, and sponsoring the Half-Time Show. They definitely started a conversation, with their brand name trending on Twitter for much of the evening. This was the first of their three spots, and by far our favorite from them. Noticeably absent from the Super Bowl ad game this year after being mainstays for the past several years, were the rest of the FCA brands; Fiat, Chrysler, Jeep, Dodge, and Ram.

This 60 second spot from Buick was one of the funnier commercials during Super Bowl 51, but in a year when many brands were delivering a more meaningful message, that wasn’t enough to make the Top Five on our list. It is amusing and effective, and the celebrity appeal with Cam Newton and Miranda Kerr is an A+ in our book.

This Ford commercial checks in at 90 seconds, making it one of the longest of the entire Super Bowl. While it’s not clear at first what the commercial is for, it quickly sets us up with relate-able situations where we’ve all felt stuck and helpless. The second half of the commercial gives us the relief of being unstuck, often by the magic of Ford’s mobility technology. It’s a message for the future conveyed in a way that is easily understood by the audience of today.

Like many companies this year, Audi decided to use their ad dollars to highlight a cause that is important to them in our current toxic political climate. The Box Car race instantly is associated with the automotive industry, but they wait till the end to let us know who is delivering the message of progress and equality. While equal pay for equal work shouldn’t be controversial, we did notice the brand getting attacked some on Twitter, so we assume that will effect their ranking on a poll based list. Our list isn’t based on polls though, and we loved it.

Hyundai is the official sponsor of the NFL, which probably left them with a bit less money to spend on commercials than other brands. So this 60 second spot didn’t air until after the game, but logistically they made that work to their advantage. Most of this commercial was actually filmed during the game, which made it even more effective. Using technology to connect loved ones to military serving over-seas is always a winner, so we were proud to rank this 3rd.

While this commercial didn’t trigger the emotions that some other spots were able to solicit, it did deliver a mixture of comedy and message. At a time when the GOP is looking for ways to abolish the EPA, this was one of the few commercials during the Super Bowl to speak to an ecological theme. Coupling that with the always funny Melissa McCarthy, who killed it on SNL the night before, and you have a recipe for a winner. The commercial was released early, which may have lessened its impact, but we found it very effective at introducing a smarter kind of crossover, the Kia Niro. This is a great example of a Super Bowl commercial done well.

This was an unexpected winner, but the messaging really spoke to us personally, even though its connection to the brand and vehicle was a bit tenuous. On Gunaxin, we truly believe in pursuing our dreams, being creators, and not just consumers of entertainment. The animation of celebrity Yearbook photos synced with their actual voices is brilliant, and the consistent messaging is both humorous and inspirational. All dreams are within reach! Well done.