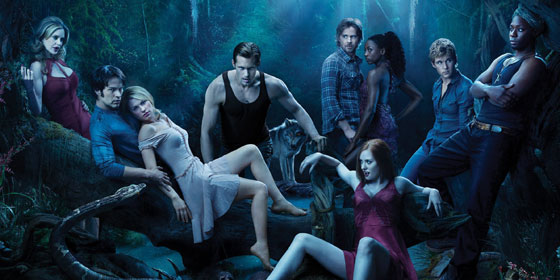 In recent years, it seems Vampires have become popular again, due to the likes of Twilight and True Blood. However we don’t want to forget the Vampires of old, so in celebration of this Vampire renaissance, we at Gunaxin present our Top Twelve Vampires in Pop Culture, non-Twilight or True Blood edition. Rest assured that none of these awful vampires will make the list. 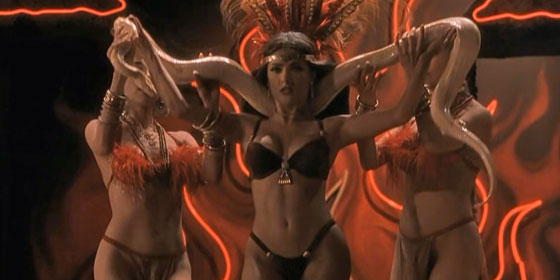 Santanico Pandemonium is the vampire from the film From Dusk Till Dawn. She is the primary Queen Vampire of the “Titty Twister”, a strip club/brothel in the middle of a desolate part of Mexico. Played by Salma Hayek in one of her first Hollywood roles, she makes a pretty memorable entrance, mainly because she looked something like the photo above. 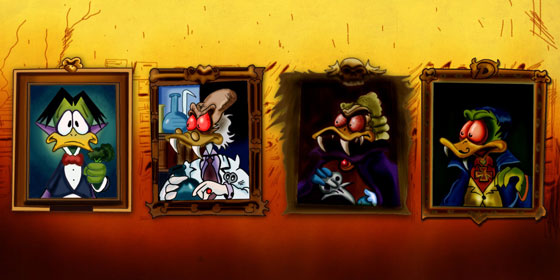 Star of the British animated series, and a spin-off from DangerMouse, the series first aired on September 6, 1988. Set in Transylvania, Duckula lives in a spooky castle known as Castle Duckula, alongside his butler Igor, and his large nanny. The show often centers around Duckula’s adventures in search of riches and fame, assisted by the castle’s ability to teleport around the world. For cornering the cartoon vampire market and for having an awesome home, Duckula comes in at number 11. 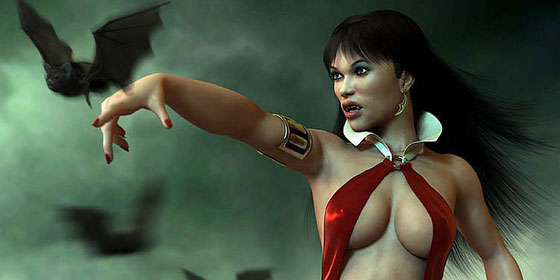 A comic book vampire heroine created by Forrest J. Ackerman, Vampirella debuted in 1969 for Warren Publishing. Although from another planet, Vampirella needs blood to survive and has many of the typical vampiric powers, including increased strength and reflexes, shapeshifting into a bat, and a mesmeric stare. She is not, however, prone to the traditional weaknesses, such as daylight, holy water, garlic, or crosses. And she cannot transform others into vampires. But what she is, is almost always scantily clad in her signature midriff-exposing red suit with a white collar and wearing shiny black thigh-high boots. Very nice! 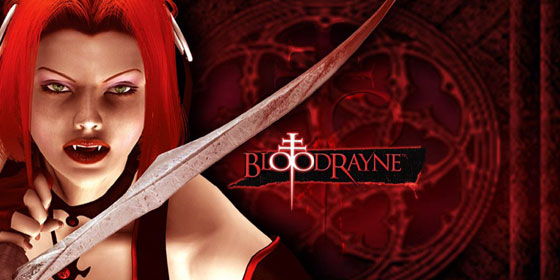 This dhampir, or half-vampire, has spawned several video games and a pair of awful Uwe Boll movies. Born after her mother was raped by a vampire, she became a powerful vampiric assassin. As star of the BloodRayne video game series, you can use the sexy protagonist to kill vampires. The movie adaptations have been largely awful, (what else do you expect from Uwe Boll?) but the first film does feature the sexy Kristanna Loken as Rayne. 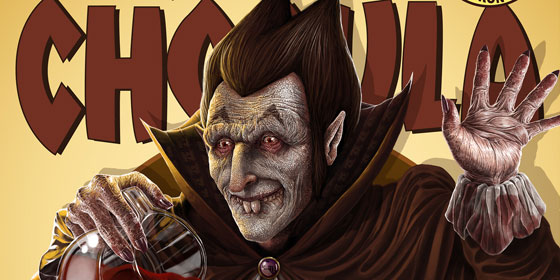 The only mainstream survivor of General Mills’ five monster-themed breakfast cereals (Franken Berry and Boo Berry still get reduced runs, Fruit Brute and Yummy Mummy were discontinued), the Count offers his chocolate-flavored corn cereal bits with marshmallows to kids of all ages. Anyone who likes sugar should love Count Chocula, and if you eat it you get the bonus of your milk turning chocolaty to boot. I have to say the cereal is simply delicious. 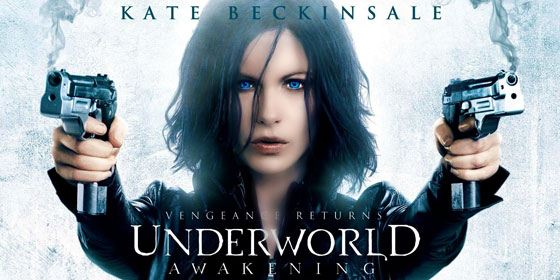 The sexy star of the Underworld movies, she is played by Kate Beckinsale and is a “Death Dealer”, or lycan (werewolves)hunter, due to her hatred for the whole species. She is caught in a long-standing feud between vampires and lycans, but after falling for a human her loyalties and motives are questioned. And can she bring an end to this long standing vampire-lycan feud? She ranks on this list for two simple reasons, she looks good in leather and she can kick-ass. 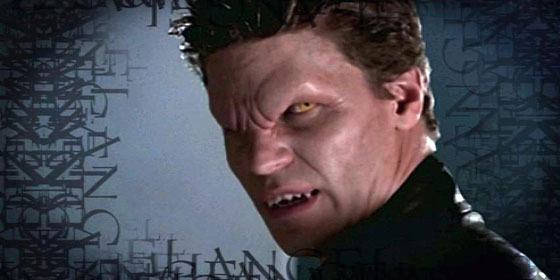 A vampire with a soul, Angel first appeared in Buffy the Vampire Slayer for three seasons before earning his own spin-off, Angel. Played by David Boreanaz, Angel was born as Liam in 1727 Ireland. As a human he had a penchant for alcohol, women, and sloth which led to him being kicked out of his home by his father. He proceeds to go on a bender and encounters the vampire Darla, who transforms him. The price of becoming a vampire is the loss of the human soul. Once turned, Liam murders many in his community, including an attack on his own house. Invited in by his sister, who believed he was an Angel, he kills his entire family. Afterwards he adopts his vampire name Angelus, latin for Angel. A rather vicious vampire, Angelus is late cursed with a soul, a punishment designed to make him suffer for his past evil. 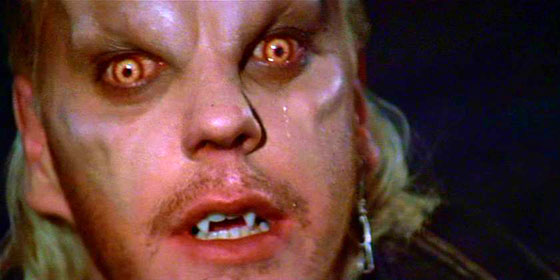 David was a memorable early role in the career of Keifer Sutherland, as the charismatic and seemingly amicable leader of the main group of vampires. He is the first to appear in the opening scene of Lost Boys on the boardwalk and instantly attempts to flirt with a blonde girl standing close by, immediately inflaming conflict. In the events of Lost Boys, it was assumed David was the head vampire until he was “killed” by the antlers and the half-vampires did not return to human. It is actually revealed that Max, the video store owner, is the true vampire master of Santa Carla. Max refers to David and the Lost Boys as his sons, so it is presumed that he turned them. 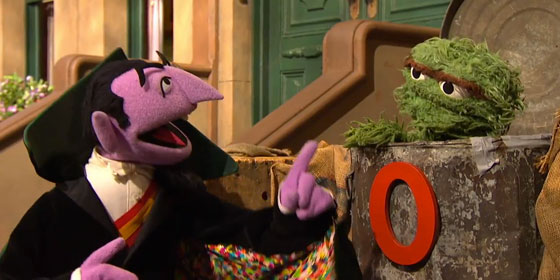 Often known as simply The Count, he is one of the Muppet characters on Sesame Street. The Count’s main purpose is educating children on simple mathematical concepts, most notably counting. The Count has arithmomania, so he will count anything and everything, regardless of size, amount, or how much annoyance he is causing others. As a kid, I encountered The Count, and he’s made an impression to this day. I think many others have had a similar experience. One…Two…Three…ah ah ah ah. 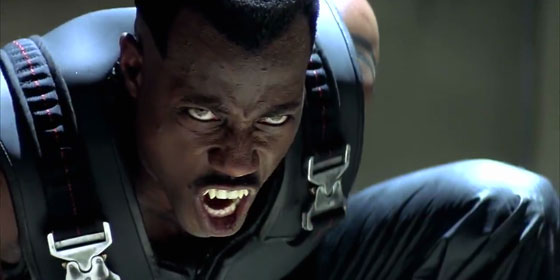 Only half-vampire, the Marvel Comic book hero turned movie star ranks third on our vampire list. Played by Wesley Snipes in the Blade trilogy films, Blade is a vampire hunter, born part-vampire after his mother was attacked while pregnant. He is known to have all the strengths, but none of the weakness of fellow Vampires. This includes super strength, agility, speed, and healing ability without fearing the sun. He swears revenge for his mother, and hunts vampires across the globe, although constantly battling his vampire side’s blood thirst. The character was later adopted into a short-lived TV series, starring Sticky Fingaz. 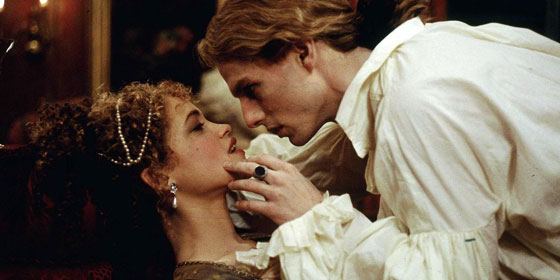 The infamous star of Anne Rice’s The Vampire Chronicles series, he was the hot pop culture vampire about twenty years ago. Played by Tom Cruise in the hit movie Interview with the Vampire, and later played by Stuart Townsend in the more forgettable Queen of the Damned, the character is known for his boldness, enthusiasm, and defiance. He also enjoys the finer things in life, including music, acting, and fashion among other pursuits. Although sometimes viewed as the villain, he can be very altruistic and is often quite philosophical. His abilities include telepathy, superhuman strength, and resilience. 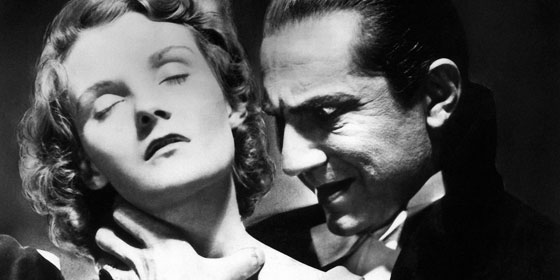 Was there ever a doubt? Derived from Bram Stoker’s 1897 novel, Count Dracula is the most famous vampire around. He has enjoyed enormous popularity since the novel’s publication and has spawned an extraordinary vampire subculture in the last few decades. One of the first film adaptations of Dracula was the 1922, silent film Nosferatu. Dracula was then adopted in Hollywood, where he was first played by Bela Lugosi followed by a number of actors. Dracula has appeared everywhere in pop culture, ranging from books to video games to movies and spawned a number of imitators. He is, simply put, the #1 Vampire.