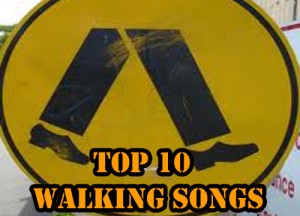 Ever been for a walk? Ever watched other people walking? Ever watched a movie where people are walking from place to place? Well then, you are sure to find a song here that you can relate to.

There had to be at least one fun, upbeat song from the ’80s in this list. It was either this or “Walk the Dinosaur” by Was not Was.  After a fair amount of deliberation, I went with this one. I may regret it later, but for now I feel good about my decision. This song is more to the point about walking. That other one is more to the point about dinosaurs, which is the subject of another list for another time that I don’t want to give too much away about at this time. So until then, ladies and gentlemen, I present to you, “Walk Like an Egyptian”!

These Boots are Made for Walking
Nancy Sinatra

It’s all about attitude, and Nancy Sinatra has plenty of it. One of the original Girl Power! songs. The Spice Girls wish they wrote this.

Walking the Floor Over You
Ernest Tubb

For those who remember the great Ernest Tubb, or for those of you who even know who Ernest Tubb is, this is one of his best. It just happens to be about walking. Country music at its finest, yes, yes.

The lonely insomniacs anthem. Seriously though, a beautiful voice. A beautiful song. Patsy, why did you have to die so young? Somebody, please, drag her body to the Pet Semetary so she can come back and sing for us some more! I’m not joking. Somebody really go do that.

Fats Domino could have easily dominated this list with “I’m Walking, Walking to New Orleans,” and “I Want to Walk You Home.” But I decided to go with this one to represent the legend that is Fats Domino and his fascination with his bipedal motivation because it’s my favorite of his. Give it a listen. I’m sure you’ll agree. It’s a good song.

Walking on Sunshine
Katrina and the Waves

So, according to the logic of this song, this guy would walk 500 miles, and then another 500 miles to be with this girl. That’s a total of one thousand miles of walking. Seems like he’d be pretty tired from all that walking. What good is he to this girl if he’s exhausted like that? Wouldn’t she end up having to take care of him? He might even end up crippled after that. Why would he place such a burden on this girl? That’s just ridiculous.

Who is this Johnny person that this song celebrates so? He must be a singer. They reference a fair amount of oldies, so I guess maybe Johnny is in a cover band, rehashing the ’50s and ’60s. That’s cool. Keep singing, Johnny. Sha-Na-Na did it, and so can you.

It’s raining and he’s outside walking in it. I guess he’s depressed. We all deal with our problems in our own way.

I have been a Johnny Cash fan for many, many years. It is likely that I was a fan while I was in the womb. Really. I had a dream about Johnny Cash a couple years ago. I wrote it down in my journal, as I do all my dreams. Essentially what happened was, my brother and I were knocking on somebody’s front door. Johnny Cash answered and invited us in. He had been expecting us and told us to go on downstairs to the basement. So we went down stairs where Aunt Jemima gave us each a lap dance while Aunt Bee from The Andy Griffith Show typed something into her Palm Pilot.

Is it just my imagination, or is this pretty much the best song ever? About walking or otherwise, this song simply kicks a lot of ass. It deserves to be #1 on EVERY top ten list.