This is a sponsored blog; while the views expressed here were genuinely ours, consideration was paid to us by Gravitas Ventures.

Animal House, Revenge of the Nerds, Road Trip, Van Wilder, Superbad, and many others have tackled the subject matter in the past, but each generation of Bros entering college needs their own film that speaks to them, and their time. Total Frat Movie is the latest in a proud tradition of raunchy college comedies to hit the theater, and it hopes to take the genre to a new level. 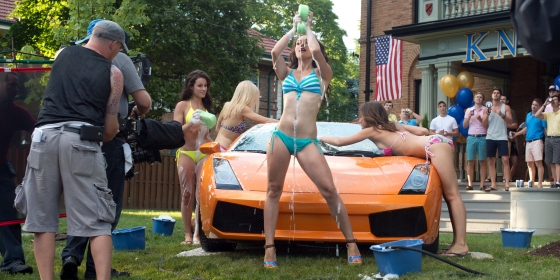 From one of the most popular websites for college students, Total Frat Movie is unapologetically raunchy and aimed at “Frat Bros”. This clearly isn’t a family film to watch with your parents or your kids.

The movie begins with a stoked Charlie Martin (Justin Deeley) as he is initiated as the newest member of Alpha Chi Gamma. The fun is quickly terminated when the Kappas, their frat rival, secretly sabotage their celebratory fireworks and burn the Alpha house to the ground. Dean Kravitz (Tom Green) disciplines them by revoking their chapter, and just like that, Charlie’s dream of following in his late father’s footsteps, one of Alpha’s most legendary members, goes up in smoke. Three years later, Charlie discovers a loophole in the college’s Greek Life guidelines, so the Dean agrees to reinstate the Alphas under one condition: get 15 members by the end of rush week. One problem: rush week starts in 24 hours.

If that looks like fun to you, just remember that they can’t even show you the best stuff on YouTube. Total Frat Movie was released in theaters nation-wide on September 23rd. But this is a modern college comedy made for a modern audience, so it’s also available on-demand, via iTunes or Amazon.