Touring Charleston in a 2016 Lexus RX 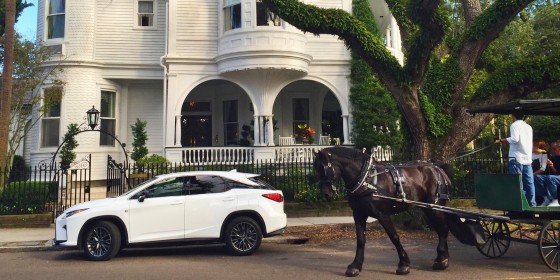 Charleston, South Carolina was once one of the largest and most important cities in all of North America. Its modern cultural significance has certainly diminished, but Charleston remains a fabulous place to visit due to its rich history, well-preserved architecture and distinguished restaurants. The Port City is also known as America’s Friendliest, so we were delighted to immerse ourselves in the southern hospitality while experiencing the latest offering from Lexus, the all-new 2016 Lexus RX. Belmond Charleston Place (below) served as our home during a long weekend in Charleston, but our RX carriage provided much more than one horse power as we cruised around Chucktown. 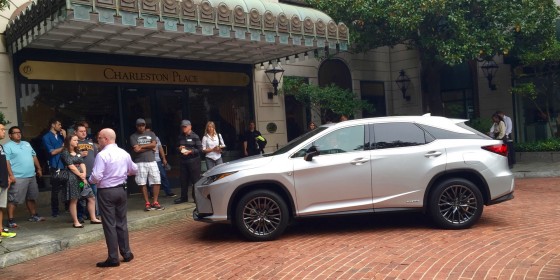 The RX is the best-selling vehicle in the Lexus lineup, so a complete redesign of the segment defining flagship is a major undertaking for the company. The popularity of the Lexus RX is no doubt due to the flexibility of a sport-utility being combined with the driving comfort of a luxury sedan. However with the new model, Lexus is taking the RX to a new level with edgy design and modern sophistication.

“Our best-selling luxury crossover has been reimagined inside and out, appealing to modern families and youthful, culturally engaged customers,” said Brian Smith, Lexus vice president of marketing.

A Paris test-drive would have been nice, but Charleston served as a compelling substitute here in the United States. We put the new 2016 Lexus RX through its paces in and around the historic city of Charleston, and below we’re going to take you on a tour with us. Along the way we’ll recount some of the places we visited, juxtaposed with thoughts about the redesigned luxury crossover.

At first it would seem the angular chiseled lines of the 2016 Lexus RX were in stark contrast to the softer historic curves of a city that dates back to the Colonial Era. However Charleston itself has changed often over its history which includes the American Revolution and Civil War. In recent years, even the Historic Charleston City Market has been supplanted by King Street as the fashionable destination for dining and night life. The Lexus RX has its own history of change, although clearly the story is a bit shorter. Still the new RX is the fourth generation design and has evolved substantially since it pioneered the segment back in 1998. 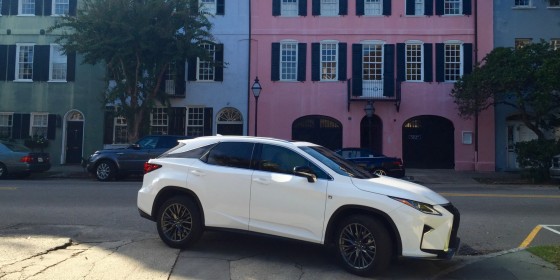 One of the iconic areas of Charleston is Rainbow Row, a series of thirteen colorful historic houses. It’s actually historically significant as the longest cluster of Georgian row houses still standing in the United States, but the popularity of Rainbow Row is mostly due to the series of pastel colors that were painted on the exteriors back in the 1930s, once again proving the importance of style. The first house painted was the pink house you see in the photo above, based on a colonial Caribbean color scheme. Other owners on the street followed the lead, and each selected their own color of the rainbow. Even new homes in the neighborhood have been inspired to match the style.

A bright paint color on a house is one of those things that never fails to elicit a response. You either love it or hate it, but everyone in your neighborhood will have an opinion if you decide to paint your house pink. While the Lexus RX isn’t really offered in any head-turning (or head-scratching, depending on who you are) colors, it does have a feature that clearly fits into the same category.

That gaping signature spindle grille is the type of design feature that always elicits a response. It premiered on the 2013 GS and has been pushed a bit further with each subsequent new vehicle. The top selling RX is one of the last in the lineup to get the controversial bold face-lift. We’re fans of the look, and think the bigger and more aggressive the better, so we especially dig the F-Sport version. Each Lexus vehicle and trim gets their own variation of the spindle grill and accompanying L-shaped LED headlights, just like colors in the rainbow. 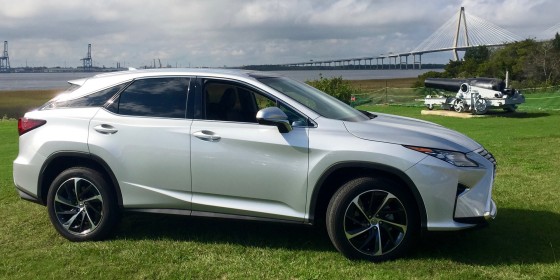 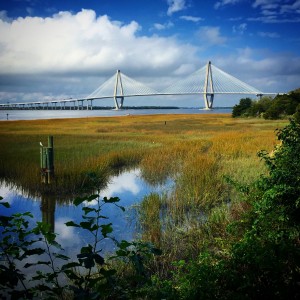 One of the newest iconic images in Charleston is the Arthur Ravenel Jr. Bridge that crosses the Cooper River and opened in 2005. It features two 575 foot high diamond-shaped towers that support 128 individual cables to suspend the deck 186 feet above the river. It’s eight lanes wide, serves a utilitarian purpose, but does it with a beautiful cable-stayed suspension design that has become iconic to the city. The photos above and to the right were taken from Patriots Point, which we visited after driving the 2016 Lexus RX across the Ravenel Bridge.

The Ravenel Bridge inspires our description of the 12.3-inch navigation screen in the 2016 Lexus RX; necessary for practical reasons, but modern and breathtakingly gorgeous. Lexus proves that technology does not need to be utilitarian, it can be the center piece of interior design. The 12.3-inch system features an Electro Multi Vision (EMV) display with a large high-definition Thin Film Transistor (TFT) liquid crystal display, enhanced Lexus Multimedia with new-look graphics and the handy computer mouse-like Remote Touch Interface. The screen is obviously used for Navigation, but is large enough to be efficiently split for multiple purposes as you can see in the photos above; including climate controls, audio controls, safety cameras, and the Lexus Enform App Suite. 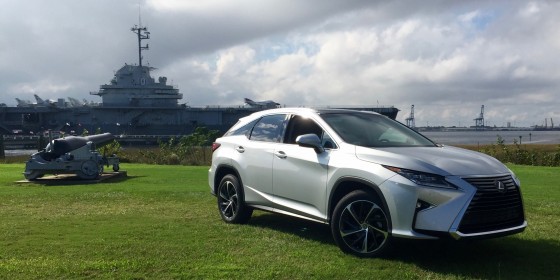 Charleston is a military town, both currently and throughout its long history. It’s home to military bases, the Citadel Military College, and the Naval Museum at Patriots Point. The USS Yorktown is an Essex-class aircraft carrier that was built during World War II (1943) and after being decommissioned in 1970 has served as a museum ship since 1975. We think you’ll agree that the 2016 Lexus RX looks sufficiently bad-ass in the photo above, and would fit in well with the aircraft on the flight deck of the Yorktown. Below we’ve posed another model in front of an F-4 Phantom II located on the parade field at the Citadel. The F-4 is a two-seat, twin-engine long-range supersonic jet with a top speed of over Mach 2.2 that was used extensively in the Vietnam era and was retired from US combat use in the mid-nineties. 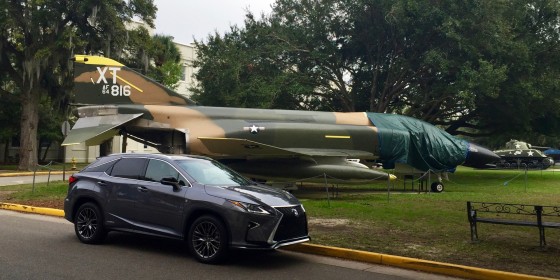 The 2016 Lexus RX isn’t exactly a jet, but we still found it fun to drive, especially the F-Sport model. The luxury crossover is offered in two main engine configurations. The RX 350 features a 3.5-liter direct-injected V6 engine that produces 295 hp and 267 lb.-ft. of torque. The RX 450h features a re-engineered 3.5-liter direct-injected V6 engine with revised hybrid powertrain componentry that produces 308 hp with 247 lb.-ft. of torque and improved gas mileage. The performance geared F-Sport trim is available with either engine. It’s largely a sporty package with visual enhancements (that we love), but does include an Adaptive Variable Suspension system and aggressive throttle mapping in Sport S drive modes. It’ll help you feel like you’re piloting a jet with an engine sound generator that uses air intake pulsations during acceleration, but you’ll have to make the “Pew-Pew” sounds yourself. 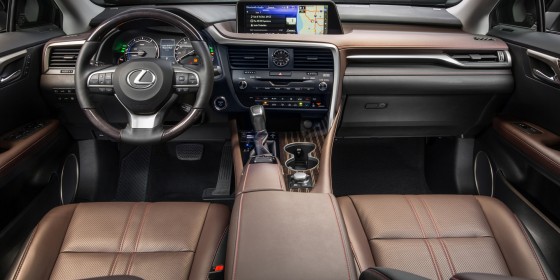 Our adventure in Charleston concluded on foot with a couple of historic house tours. Unfortunately they did not permit us to take photographs inside, but the homes were full of historic furnishings and artwork featuring exquisite craftsmanship. We immediately drew the comparison between the sophisticated new interior of the 2016 Lexus RX, which features natural materials and expertly crafted finishes.

We’ve utilized press-kit photos in this section to make sure we’re clearly showing the quality of the materials, because they truly are gorgeous. Available interior trims include Matte Bamboo, Espresso Walnut, Matte Linear Dark Mocha Wood, Striated Black Trim or Gray Sapele Wood with Aluminum. Unlike the antique furniture we encountered on the historic Charleston house tours, the heated and cooled leather seats in the Lexus RX were extremely comfortable. The cockpit is decidedly more spacious and modern than the F-4 Phantom as well. 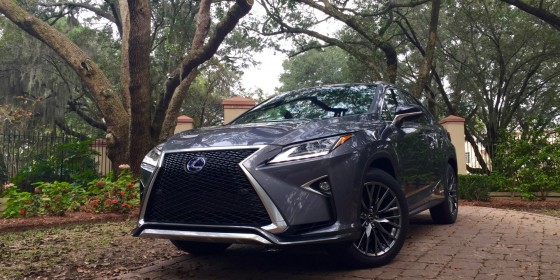 While the radical new style of the 2016 Lexus RX may seem out of place at first in Charleston, the longer we drove it around town, the more the location for our drive event made sense to us. The sophisticated style of the RX felt right at home and made us never want to leave Southern Living’s most hospitable city.

The segment-defining luxury crossover from Lexus is available now at dealerships starting at $42k for the FWD RX350. The RX 450h AWD F-Sport model tips the scale on the high-end at about $57k. We’re big fans of the new style, but we’re interested to see how the existing customer base of wealthy soccer moms will embrace the new look. We have a feeling it will have a greater appeal to male buyers, which should help create balance for Lexus and possibly grow market-share for an already successful product, if they don’t alienate too many existing owners.