Motors > Trucks > Towing Like a Pro with GMC, Into the Dunes of Southern Utah

Towing Like a Pro with GMC, Into the Dunes of Southern Utah 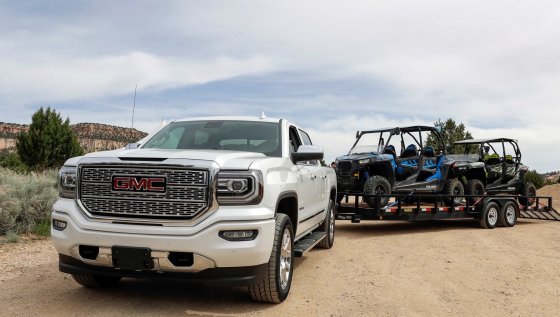 I like to think that I’m good at towing. I’ve done a lot of it, including professionally as a truck driver. Over my lifetime, I’ve towed with big vehicles, small vehicles, and most of those in between that. I’ve pulled trailers short and long, little and large, heavy and empty. Outside of trucking school, however, I don’t think I’ve learned as much or thought as much about towing as I did at an event in St. George, Utah hosted by GMC. The fact that it ended with sand-throwing in ATVs in the desert and a tour of Zion Canyon made it a lot of fun too.

We arrived at the Red Mountain Resort in St. George and were met by several friends from GMC along with some 2018 GMC Sierra 1500 Denali pickups hitched to trailers loaded with two- and four-seat all-terrain side-by-sides. Among a small group of journalists, we were introduced to the trucks and their capabilities and given a short course in towing fundamentals. I paired with someone who hadn’t towed before in hopes of getting a view of towing from a newcomer’s eyes. 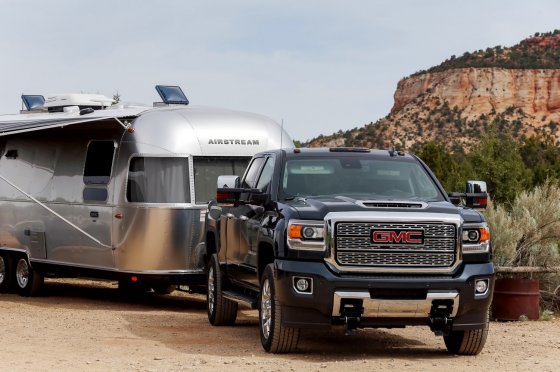 Towing is about getting a trailer from one point to another and doing it safely. The capabilities of the vehicle doing the towing, the load to be pulled, the trailer to be used, and the way that trailer attaches to the truck are all factors to be considered. The truck, for example, may be able to pull 12,000 pounds, but if the hitch on the truck is not rated for that, then the truck can only pull the maximum amount of that hitch’s rating. Similarly, a trailer may be large enough to physically hold an object, but if the object is too heavy for it, the trailer cannot carry it.

For our purposes, the trailers were more than a match for the ATVs strapped to them and the trucks were equipped to carry far more than the trailers had on them. From there, it becomes a matter of distributing the load correctly and driving it safely. 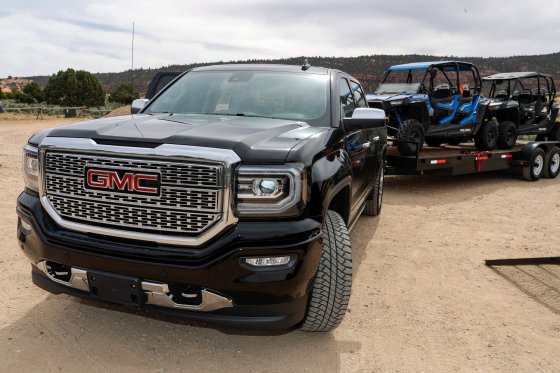 Load distribution is another point many who tow do not tend to consider. A boat on a trailer made for it or a car on a single-car hauler are already load-distributed by the design of the trailer itself. Most loads are not this predictable. In our case, the weight of the individual ATVs could be easily estimated and the weight of the trailer, when empty, was also easily determined by looking at its identification sticker. If the ATVs were placed on the trailer evenly, one up front, one in the back, then the load is evenly distributed on the trailer. Other loads may not be as obvious.

The general rule of thumb for bumper-pulled trailers (such as we were using) is to have the load distribution putting about 15 percent of the trailer’s total load (cargo weight) on the trailer’s tongue (the part that hitches to the truck). This indicates that the trailer is balanced and puts enough force on the truck to cause an even pull and push when towing without overloading the truck so that its front tires are pushed off of the ground. That latter point, which happens with overloading, affects braking and steering, making the rig unsafe. 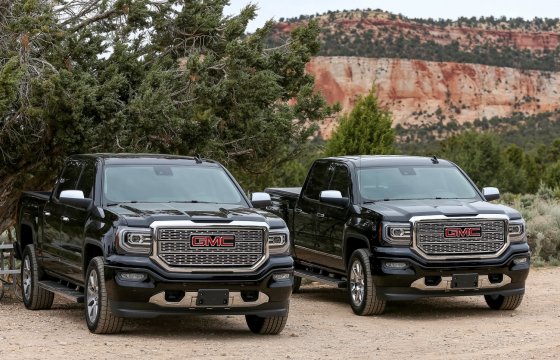 Our tow rig was a 2018 GMC Sierra 1500 Denali with a 5.3-liter V8 under its hood. This pickup in that particular configuration has a maximum towing capacity of 9,300 pounds. Our trailer and its cargo weighed about 6,400 pounds altogether, roughly 1,500 of that being trailer. About 800 pounds of weight was on the tongue pressing down on the truck’s ball hitch. 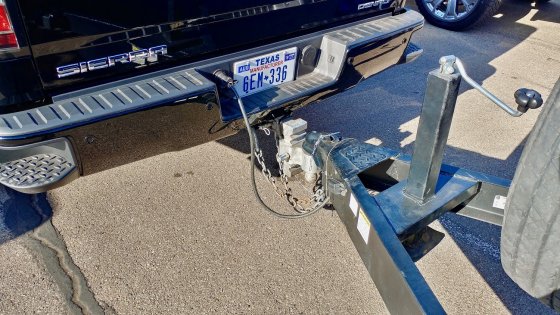 After the load is checked and the trailer is attached, it’s important to check the attachment and the lighting on the trailer. With a ball hitch, the trailer will attach with a “cup” fitting over a round ball that’s attached to the truck. Once in place, the “cup” is cinched so that it cannot bounce off the ball. A set of safety chains (usually two) are then run from the trailer’s tongue, just behind the ball attachment, to the truck’s hitch or frame.

These chains should be crossed underneath the ball hitch before being attached to the truck. Doing this creates a “cradle” into which the trailer’s tongue can fall if it comes loose from the ball. This additional safety measure keeps the trailer’s tongue from hitting the ground should a disconnection happen. If the tongue were to hit the ground at high enough speed (such as on a highway), the trailer could (and likely will) catapult end-over-end. Not good. 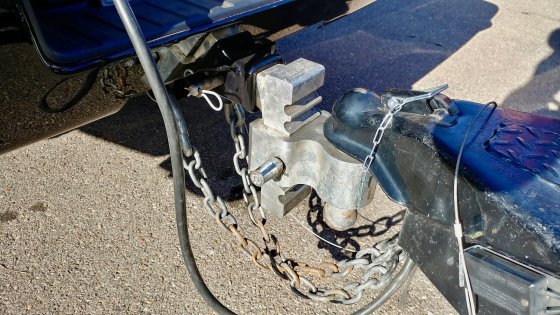 Plugging in the lighting is a matter of having a correctly-matched trailer plug and receiver on the pickup truck. Our Sierra Denalis were designed to receive either common plug, which include trailer brake controls.

Testing lighting requires that one person sit in the truck and run the turn signals, brakes, hazard lights, and headlamps to ensure that the corresponding lights on the trailer (spotted by the other person) are functioning in tandem with the truck.

Getting Out On the Road and To the Dunes 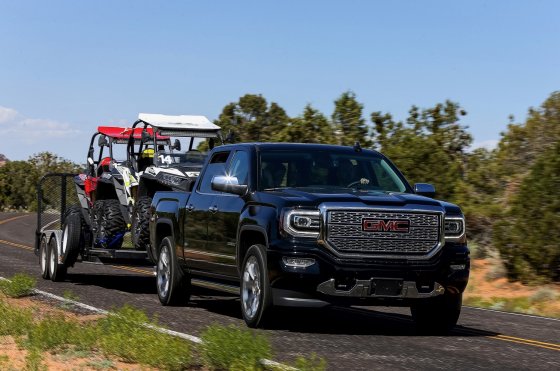 Once underway, I realized that the Sierra I was driving was matched well to the load being carried. It was capable of more, of course, but like most trucks, pulling it’s maximum capacity would mean struggling on hills and slow starts at stop lights. As it was, the 2018 GMC Sierra Denali did well with this setup.

The trailer was well-balanced, the load didn’t shift, and the brake force added by the trailer brakes was sufficient to keep movements even. This is where the next part of towing comes into play: minding the trailer’s track and monitoring trailer sway.

The trailer’s track is where the trailer’s tires are going versus where the truck has been. The distance from the pickup truck’s rear axle to the center of the axle(s) on the trailer determines how much further inside the turn the trailer will track on a turn. On a 90-degree turn through an intersection, for example, the tracks of the truck’s rear tires will carve a curve through the turn. The trailer’s tires, however, may be two or more feet inside that turn, cutting a sharper track. This is why many trailers go over the curb on a corner. Preventing that from happening requires a wider turn radius. 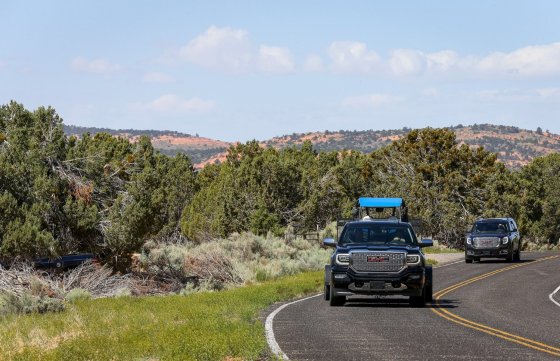 The simplest solution is to swing wider, of course, but the best solution is to make a “button hook” turn. This has the pickup truck moving forward in a straight line into the intersection and then turning sharply into the turn at the apex of the intended curve. This makes the truck create a sharper track and pulls the trailer further forward so that its track is then well inside the lane, avoiding the curb bump. Truckers do this by rote, but many amateur trailer pullers aren’t as versed.

The other aspect of towing is knowing the load’s dynamics and how it responds to braking and routine slowing and speeding up. This gives the driver a good idea of how much distance should be allowed for to come to a complete stop safely and how much slowing should be done to make a turn or corner without stopping first. This is usually intuitive for the driver, who will quickly translate regular car or pickup truck dynamics to account for the added length and load.

Trailer sway is when the trailer moves independently from the truck. It can be caused by many things, from bad road conditions to heavy winds or malfunctioning trailer brakes. When a trailer sways, the feeling is similar to the momentary loss of control felt when hydroplaning or slipping on ice. It’s usually less alarming than those things, once you’ve experienced it a few times, but it can be disconcerting. The GMC Sierra trucks were well-designed with good trailer sway controls for managing that phenomenon in most standard situations. This kind of control has become standard on today’s market.

In stickier situations, where trailer sway becomes a real issue for the driver, safety must be considered. Slowing down, taking an alternate route, or just waiting out the weather are better alternatives than white-knuckling through bad conditions to try to “get there.” Trailer sway is no joke and can capsize or otherwise throw a rig out of control and there is often little a driver can do to stop it. 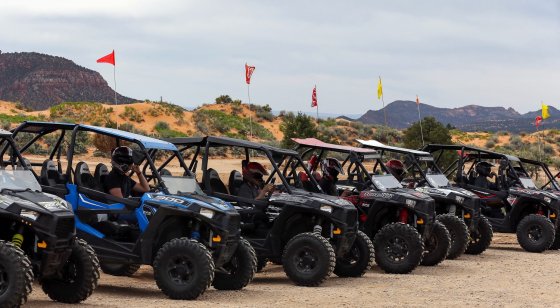 Once we arrived at the Coral Pink Sand Dunes in Zion Park, the trucks were parked and the trailers were unloaded. Then it got really fun. Flying through the sand on our ATVs, we were guided by a professional dune guide, who showed us some great places to ride and then let us have at it. 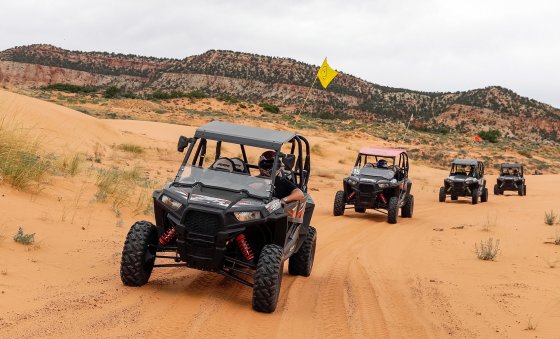 I personally love this kind of thing and spent the afternoon driving both the four- and two-seat Polaris side-by-sides on the sand. Catching air (briefly) over truncated dunes, throwing rooster tails behind the ATV, and doing some epic drifting on the sand was a blast. 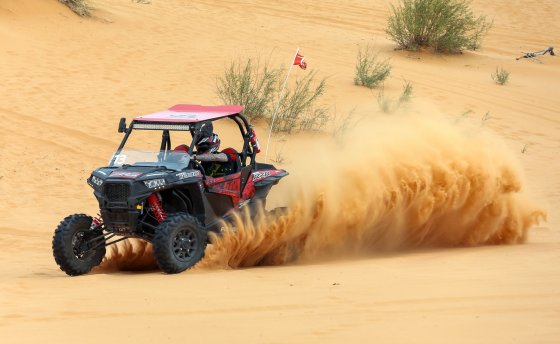 After our rides were done, we swapped trucks and headed into Zion Canyon to get back to St. George. In the canyon, we saw beautiful sandstone mountains with varied strata and blooming plant life all around the desert scape. Big horn sheep, deer, hundreds of bird species, and more were all around us. Driving through the long tunnel that cuts through one of the sandstone cliffs with its occasional portals to the outside grandeur was breathtaking. 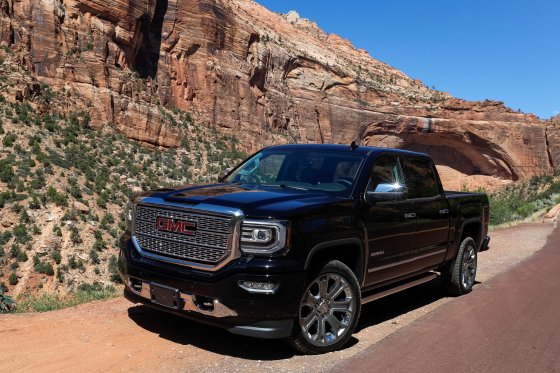 The trip to Utah was well worth the time and GMC’s hospitality and excellent Tow Like a Pro program for teaching towing basics was very well done. A lot was learned (and re-learned) on this trip and we encourage everyone to get schooled on towing basics through GMC’s online booklet explaining how to Tow Like a Pro.