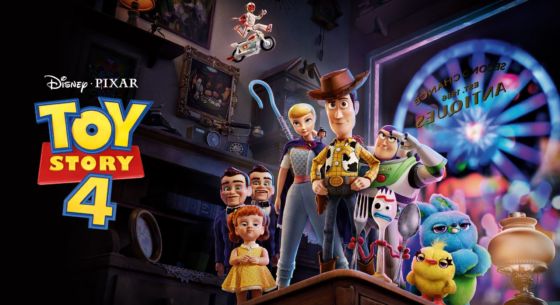 (Author’s note: If you read nothing else, when you see this film, stay all the way to the end of the credits into the company logos.)

Not many thought we’d be back here after Toy Story 3 – often thought to be the best of the series – gave a bittersweet ending to our heroes and their owner Andy. After all, the life of a toy can only take us so far in our childhoods, and we were able to watch our heroes Sheriff Woody Pride (Tom Hanks) and Buzz Lightyear (Tim Allen) embrace a fresh start as Bonnie’s (Madeleine McGraw) new friends. Through fifteen years of thick and thin, triumphs and near-death experiences, we coped with the existential conundrums of toys, their owners, and the world around them. 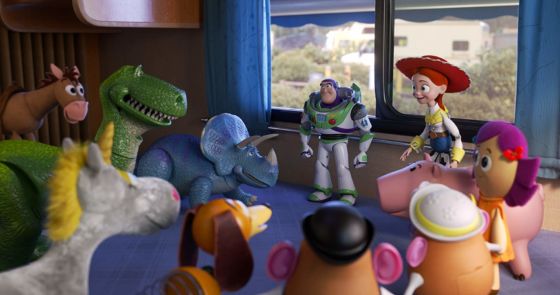 Nine years after Toy Story 3, the franchise is injected with new life and purpose with Toy Story 4. “Purpose” is the theme which this film nails to the wall as we find old characters in new roles, another marker of how time wears on not just in the film world, but our own lives. If ever there was a constant, it is change itself; not even Woody or his gang can avoid it, being less leaders and more followers in Bonnie’s toy hierarchy. Even Bo Peep (Annie Potts), Woody’s longtime love interest, loses her place in the room and winds up in a donation box. 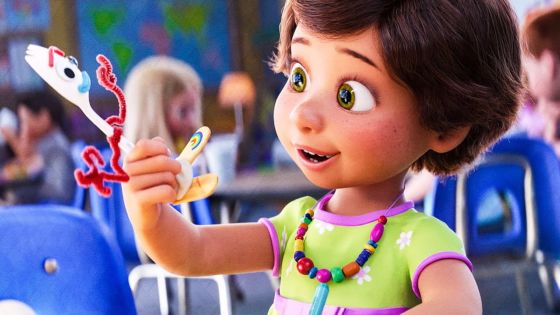 However, they’ve got something new to deal with: what happens when their kid comes home with a toy she’s made from scratch? Is it a toy? Or does it identify itself as the parts from which it’s made? Nature versus nurture? Form over function? Nature and form are all Forky (Tony Hale) knows, not having any time or help in the mere hours he’s been put together to understand what he means to Bonnie. Of course, the rest of the toys are there to help him… which mostly means keeping him out of the garbage can into which he keeps trying to fling himself. 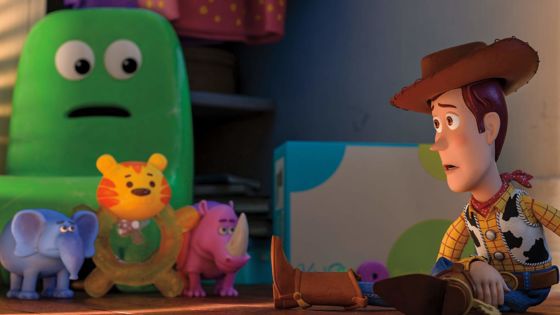 This also asks a larger question of Woody, who’s having doubts about where he stands. Does he have a function anymore, or is he just a form in Bonnie’s consciousness as she moves onto other toys? Can he do anything to get himself back into frequent rotation, or is it simply acting out of desperation for attention, wanting to get back on top again? What is his purpose, if it’s not to be the leader in the toybox or Bonnie’s favorite? 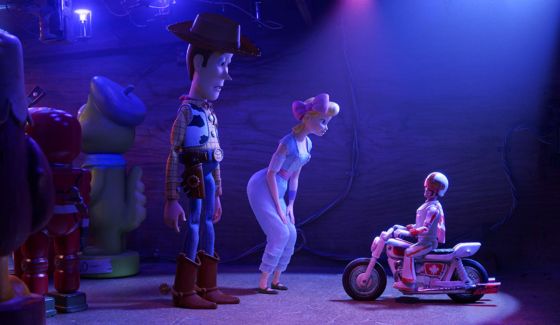 Woody’s exasperated “YOU… ARE… A… TOY!” from the first film comes back into play as he tries to convince Forky of his new nature. However, it’s not borne of exasperation; instead, it’s done out of genuine concern for Forky, who can’t seem to break free of his self-image and accept that he’s no longer trash. Which, of course, leads to another road trip mishap where Woody and Forky wind up stranded on the side of the road, miles away from their family and friends. These plot devices from 1995’s Toy Story seem to be a bit of a convenient retread, but it only leads to the main conflict of the film, when a familiar sight in an antique store introduces us to this film’s villain, Gabby Gabby (Christina Hendricks).

There’s a lot to unpack with Gabby Gabby. She’s an older-model pull-string doll with a voice as cute as a human tyke’s, but with the chilling demeanor of an entitled opportunist who must get what she wants when she wants it. Abandoned for having a malfunctioning voicebox mechanism (the one which humans can hear when her string is pulled, not her toy-world speaking voice), she’s surrounded herself with an army of creepy ventriloquist dummies, sending them after Woody once it’s discovered his pull-string mechanism is compatible with hers. Without her voicebox, she is without purpose, thus doomed to a life collecting dust on the store’s shelves; with it, there’s hope of the store owner’s daughter claiming her. To get there, she plans on taking Woody’s voicebox any way she can, even by force. 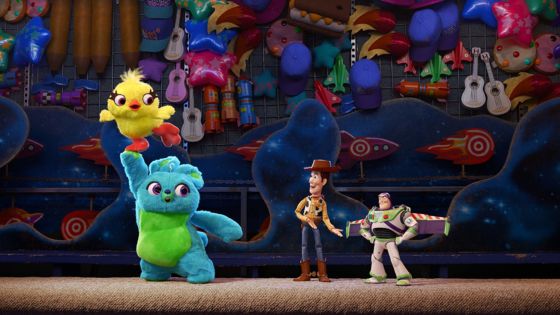 It all comes back to that word: purpose. What we’re meant to do or be for others. Even the arcs of harebrained comic relief duo of carnival plush prizes Ducky (Keegan-Michael Key) and Bunny (Jordan Peele) or stuntman extraordinaire Duke Caboom (Keanu Reeves) are vital in carrying this theme. Sure, they’re hilarious to watch and hear, but where would this film be without their necessary contributions to both plot and emotion?

This is Woody’s story through and through, with lesser focus put on the rest of the original gang. He has a lot of things to sort out before he reaches his final truth. Putting up with Forky and fending off Gabby Gabby’s minions may seem like annoyances, but every bit of it drives him closer to becoming his own person. Tom Hanks has been rock-steady as Woody and he shows no signs of having lost a step in the 24 years he’s been behind this role, giving a wide range of emotions with which we can sympathize and internalize. 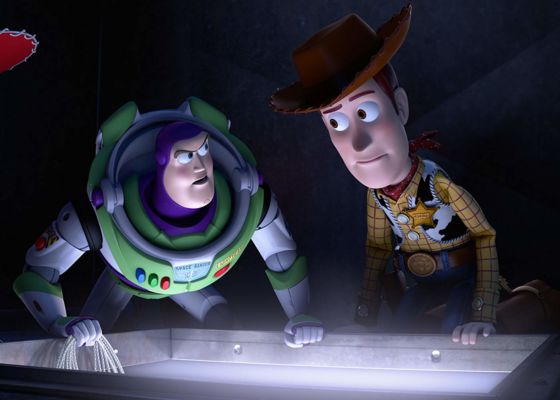 Toy Story 4 is an inspiring, heart-lifting film, discussing our sense of self and purpose while still imparting kindness and fun. While Toy Story 3 may have tied off Andy’s story well, it always left the question as to what happens when beloved toys aren’t so beloved anymore? We’ve seen it in flashbacks with Jessie in Toy Story 2 and Lotso from Toy Story 3, but never from the first-person, in-the-now perspective. Thanks to Toy Story 4, we finally get our answers, and hearts might be broken at film’s end. Yet it’s an entirely fitting and earned conclusion, filled with the promise of imagination and adventure.

Toy Story 4 is an inspiring, heart-lifting film, discussing our sense of self and purpose while still imparting kindness and fun.