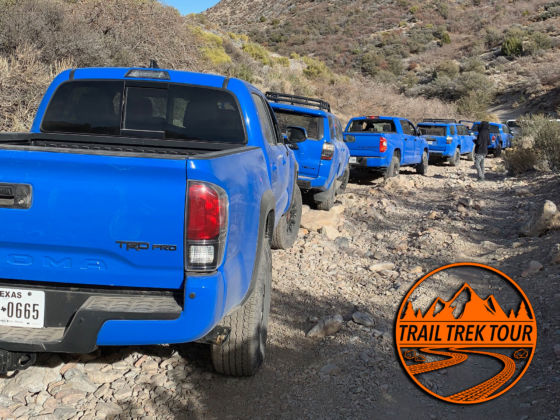 The TRD Pro Series is Toyota’s line of their most off-road capable trucks, with proven engineering and toughness to help you explore places that aren’t found on most maps.

First unveiled in 2014, the TRD Pro lineup was born from Toyota’s rich racing and off-road heritage. All TRD Pro vehicles offer unique styling, as well as highly capable, tried and tested performance off-road equipment, specifically tailored for when the pavement runs out.

While there is plenty of sexy TRD Pro badging both inside and outside the vehicles, this is far from just an appearance package. To help prove that point, we love taking the entire lineup off the pavement to see just how far they’ll take us into the wilderness, but always make sure we have enough gas to get back out. Because where we’re going, AAA isn’t likely to find us. 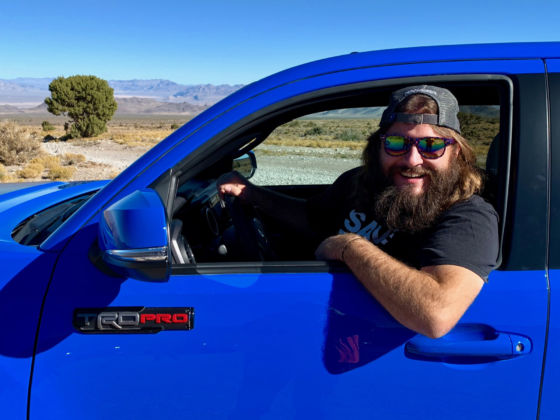 We’ve taken the TRD Pro Series trucks on a few adventures in the past, including an Off-Road Adventure in and around Joshua Tree National Park last year with the 2017 models, and playing in the mud earlier this year in Texas. 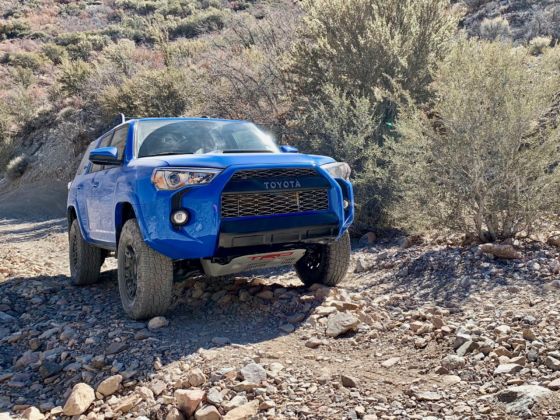 Our latest off-road adventure with the Toyota’s TRD Pro Series vehicles was hosted by the Trail Trek Tour and involved an all-day trail ride to the top of Wheeler Pass in the Spring Mountains area of Nevada. Here we were able to put the off-road equipment in the TRD Pro Series vehicles to the test, especially the Fox Shocks and All-Terrain Tires. We were greeted with a variety of surfaces, including sand and loose rock, and the TRD Pro trucks ate it all up with ease. We did our best to avoid the big rocks, but those TRD Pro front skid plates definitely helped to reassure us. We captured much of the adventure on video, which you can experience for yourself below:

That fabulous color you see is new for 2019, and called Voodoo Blue. It really looks great against the muted desert tones of Nevada. Our group consisted of eight vehicles, with a lead Tacoma and a support Tundra (with extra tires and supplies) sandwiching six (two of each) beautiful new TRD Pro Series vehicles in between. Our media group took turns behind the wheel of each truck, and everyone made it to the top of Wheeler Pass without any issues. The Tundra proved to be the most challenging to drive, as it is both longer and wider than the Tacoma and 4Runner, but it was able to handle every challenge we put in front of it. 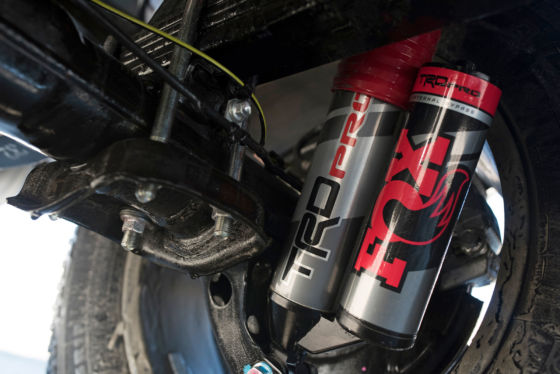 We decided not to air down tires, in order to keep the vehicles as stock as possible, which did create for a bumpy ride, but nothing the Fox shocks couldn’t handle.

For 2019, the entire TRD Pro family rides on 2.5-inch TRD Pro-exclusive Fox Internal Bypass shocks. Tuned specifically for each vehicle by the engineers at TRD, the aluminum-bodied Fox shocks offer impressive performance and supreme damping for a wide variety of driving situations. High-speed desert running, slow-speed rock crawling, or simply driving to and from work – drivers and passengers will be as comfortable as they are confident. 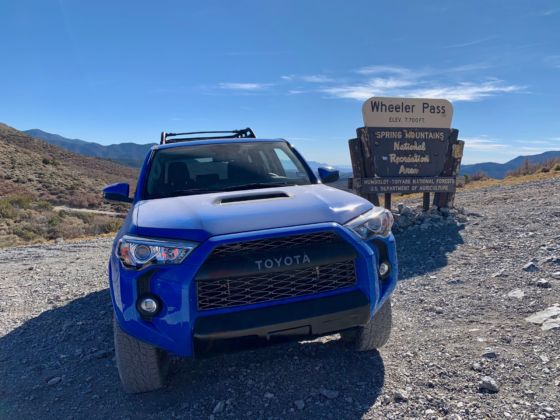 The top is a great place to stop, take photos, and swap some stories. But at 7,700 feet above sea level and also above the tree line, the wind was whipping when we reached Wheeler Pass, so we decided to break for lunch a bit further down the trail. We packed some subs and drinks for a casual trail lunch and enjoyed using the trucks themselves as furniture for the stop. 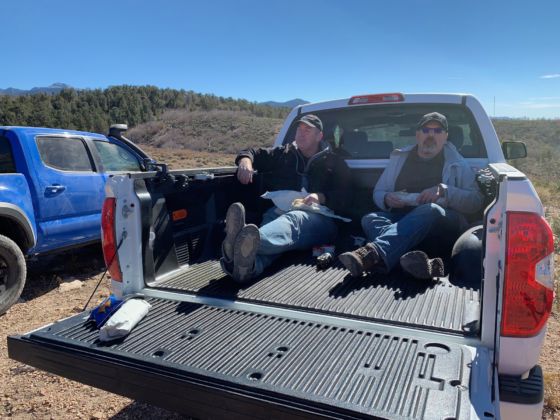 This gave us an opportunity to try out the Tailgater Tire Table, which brilliantly just attaches to the tires for support. They helped to provide some additional flat surfaces, which are always needed when tailgating or camping. Quick setup and takedown was the goal for this trail lunch, as we wanted to maximize our time behind the wheel before heading back into Las Vegas. 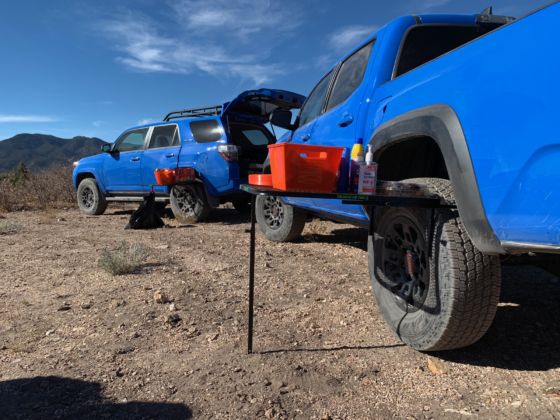 After breaking for lunch, we loaded into the trucks and headed down the mountain back to the trail head in Cold Creek, NV the way we came. Terrain looks and feels a bit different on the way down than it does on the way up, so this was a good test of both the trucks and our drivers’ skill levels as we carefully picked our lines through some tricky obstacles. 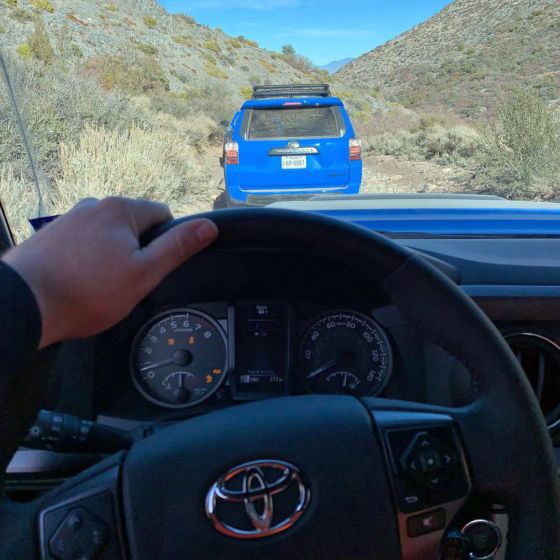 The Spring Mountains scenery was outstanding and the TRD Pro Series trucks handled everything we threw at them with ease. We rolled off the trail as scheduled and had time to pose the Tacoma for one last photo before heading back to Las Vegas for dinner at the Park MGM. Another off-road adventure completed successfully just leaves us itching for more time exploring this great country behind the wheel of these capable trucks. 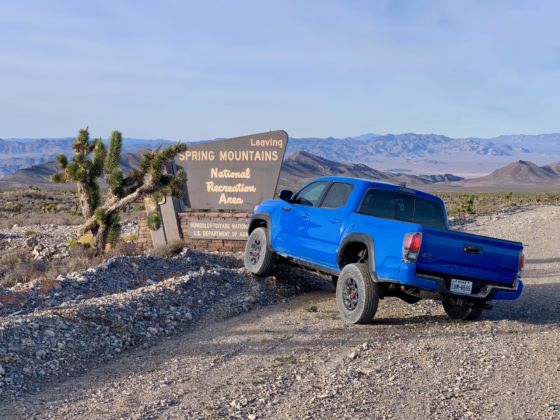 The 2019 Toyota TRD Pro Series vehicles are now available in dealerships and we know they’ll continue to be a hot seller for Toyota. If you buy one, we hope to see you out on the trail some day too.

For much more from our TRD Pro Series trail ride with the Trail Trek Tour, check out the coverage from the other media on this trip : 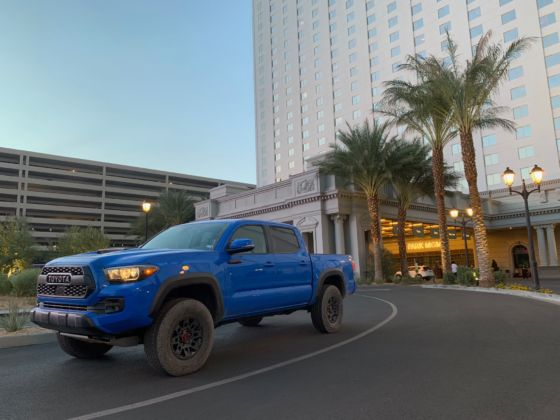 Read more about The Park MGM, which served as the host property of the Trail Trek Tour : Vegas Adventure with Toyota TRD Pro.