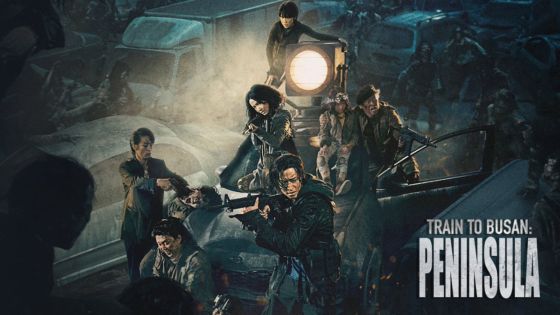 The 2016 surprise zombie/action movie Train to Busan caught us all off-guard as an unknown, gut-wrenching tale about a family’s fateful journey from Seoul to Busan, Korea. Word of mouth passed rapidly among the cognoscenti, filtering on down to us plebeians after its release on Netflix, where it quickly found a dedicated following. A radical combination of compelling horror, suspense, and drama, Train to Busan took the best of George A. Romero’s lore and Zack Snyder’s updated kineticism, blending it all into a vicious, take-no-prisoners film which succeeded in palpably stressing out its viewers. 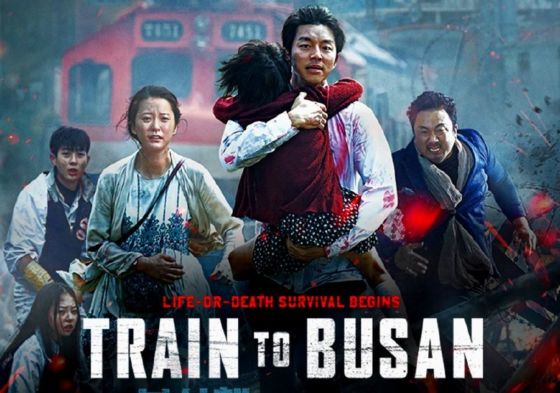 Four years have passed in the real world and in Train to Busan fictional timeline, bringing us to Train to Busan Presents: Peninsula. (Using the Korean title Peninsula [which this review will use as well] wouldn’t bring fans of the original running like the undead on the prowl for human flesh, would it?) Returning director/co-writer Yeon Sang-ho once again serves up his signature menu of breakneck action and drama, opting to lean less on scares and more on the emotions of the piece as he did with this film’s predecessor. It’s a winning combination which makes Peninsula rise above your typical zombie movie, even if it owes a large debt to Romero’s Land of the Dead. 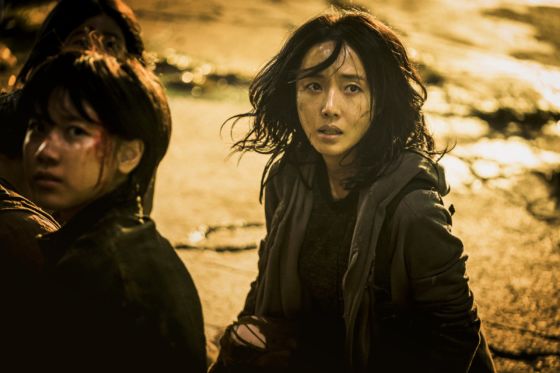 Both Land of the Dead and Peninsula concern a band of rogues led by a former soldier attempting to find a truck amid the barren wasteland of a zombie apocalypse. There’s a stronghold in which a band of violent survivors are holed up, pitting their captives in games against the undead, the latter of whom are easily distracted by bright lights, loud noise, fireworks, and flares. One person who can’t even fight has positioned himself as the sole figurehead, availing himself of the best food and drink while those under him eat scraps. There’s even a disfigured, well-meaning lackey running around trying to smooth things over and a crazed militia leader who perpetuates most of the carnage befalling our hero and his crew. 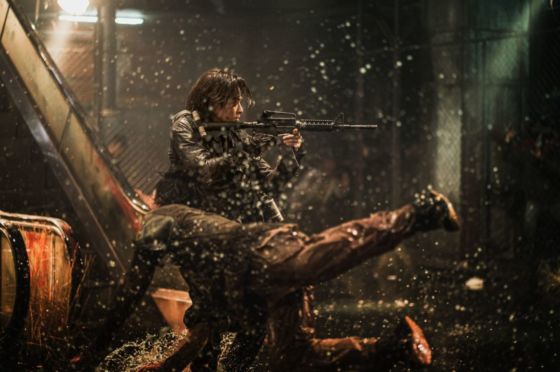 Whereas Romero’s film dealt with post-9/11 xenophobia, Yeon chooses to go for a more redemptive route with Jung-seok (Gang Dong-Won). In the film’s prologue, he’s seen in his battle uniform while carting his sister’s family to one of the last boats to make it out of a ravaged Incheon. He agonizes over passing up a stranded family on the side of the road as he continues his journey, garnering questions from his sister as to why he left them to die. Jung-seok is not defined as a heartless mope; he’s only doing what he can to ensure his loved ones’ survival. 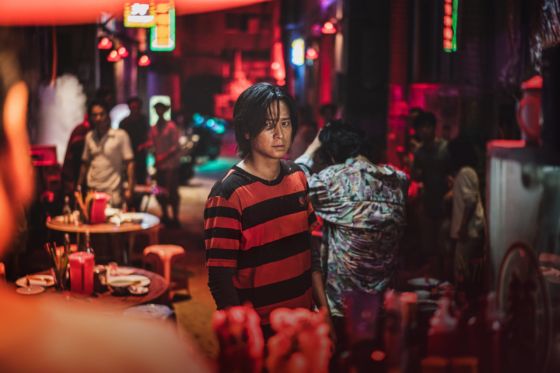 It’s all for naught as the pre-title sequence comes to an end, which finds him and brother-in-law Chul-min (Kim Do-yoon) four years later in a Hong Kong slum, unkempt and working for an American ganglord who needs them to go back to Incheon to rescue a truck carrying $20 million of his money. Prodded on by the prospect of getting out of Hong Kong and starting over with his cut of the cash, Jung-seok reluctantly agrees to go with Chul-min and two others… and so begins a fool’s errand in a film full of fool’s errands. 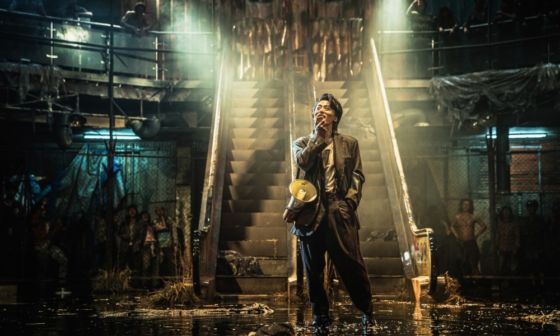 Again, Yeon and co-writer Park Joo-Suk weave together themes of abandonment, the “us vs. them” mentality, and class warfare; they also throw in unfortunately timely commentary regarding an Asian lab’s responsibility for turning a population into zombies. As always, the zombies are representative of us as a society, running to consume or destroy anything in our way. Similar to Romero’s underground carnival in Land of the Dead, we’re granted a larger arena for the customary survival game which features survivors spray-painted survivors trying to outlast a zombie horde. 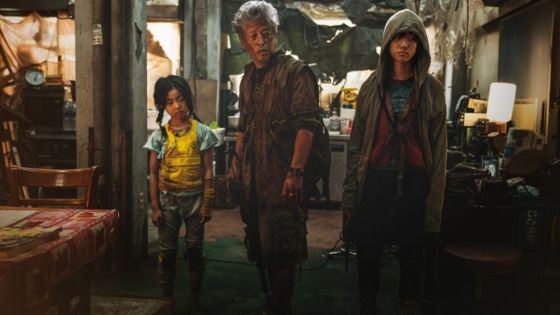 Peninsula takes it one step further with a first act discovery which ultimately shapes Jung-seok’s purpose and path to redemption which involves survivors Min-jung (Lee Jung-hyun), her father Elder Kim (Kwon Hae-hyo), and her daughters Joon (Lee Re) and Yu-jin (Lee Ye-won). This arc, along with the loss of Jung-seok’s sister and her son, provides the film’s ample emotional thrust and some incidental gallows humor in the early goings, especially as it comes from little Yu-jin, played endearingly by Lee Ye-Won. 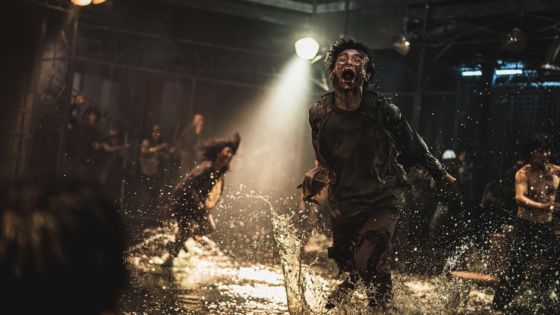 Whereas the 2016 original reveled in daylight, Peninsula operates almost exclusively in the dark of night. Take note of the few scenes in which the sun’s rays are present; Yeon uses this to lull us into believing things will be all right for Jung-seok, Min-jung, and the others. The light-filled prologue serves as both a transition from the first film’s overexposed look before plunging us into physical and metaphoric darkness. (Oddly enough, Train to Busan’s main action starts in darkness and ends hours later during a sunny afternoon.) 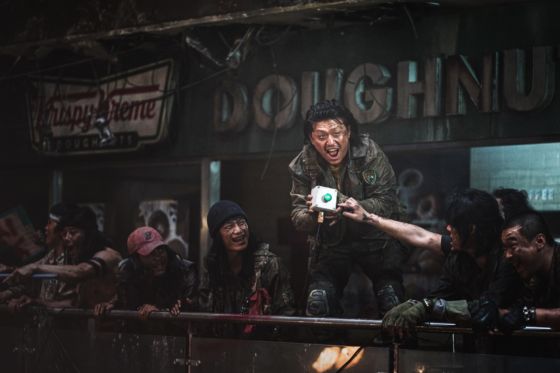 The film’s central narrative takes place over the course of some 24-plus hours packed full of conflict, double-dealing, and zombies running around looking for their next meal. We’re kept right by Jung-seok’s and Chul-min’s sides as they both try to escape with what they want; however, their wants change with their circumstance, as they’re no longer part of a squad on a treasure hunt. An excellent single-take sequence toward the middle of the film pulls no punches in laying bare Chul-min’s terrifying new role in the military stronghold, while Jung-seok comes to the realization that he has more to care about than his own self. 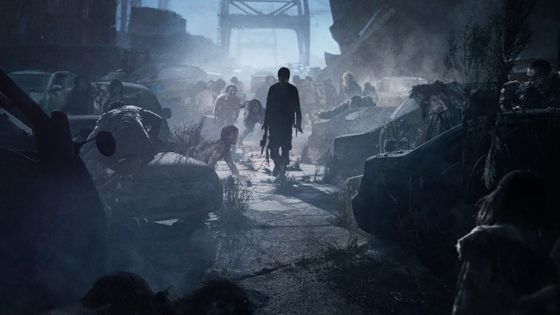 These and other plot points all might be familiar tropes in the zombie-film playbook, but Yeon Sang-ho makes mincemeat of our expectations by delivering an explosively exciting second chapter in his saga. Each ingredient works perfectly in concert to blast us out of our chairs with blinding force and waves of blood-soaked energy, raising the physical and emotional stakes early on and never looking back. The main cast is magnetic, especially Gang Dong-won and Lee Jung-hyun as sudden co-combatants trying to keep their hopes in check while helping their respective families find their way out of Incheon. Train to Busan Presents: Peninsula only relies on the setup set forth by the original; none of the characters or story points (except, of course, the virus) are carried over. Instead, this film forges its own path with guns blazing, heartfelt emotion, and blood by the barrelful.

Peninsula forges its own path with guns blazing, heartfelt emotion, and blood by the barrelful.