Trash the Trailer – “The Bounty Hunter”

That cinematic atrocity up above is the trailer for future feminist masterpiece “The Bounty Hunter” starring Leonidas and an animated strip of beef jerky that vaguely resembles Jennifer Aniston (well, we guess she doesn’t use artificial tanner to get that bronzed).  We thought we’d do you a favor and deconstruct why, exactly, you shouldn’t go anywhere near it.

First of all, the creep factor.  We’re not feminists here at Gunaxin, in case the copious boobies and Andrea Dworkin dartboard didn’t clue you in.  But just the opening of this trailer is pretty goddamn creepy, as it features Gerard Butler with a rapist beard chasing down a woman, picking her up, and throwing her in his trunk while she’s screaming for somebody to help her.  And apparently nobody in this movie universe thinks that’s at all odd.  Pretty much the only way they could make this look more like a serial killer about to rape, skin and eat the most annoying Friend would be to give him a white windowless van with “Free Candy” painted on the side. 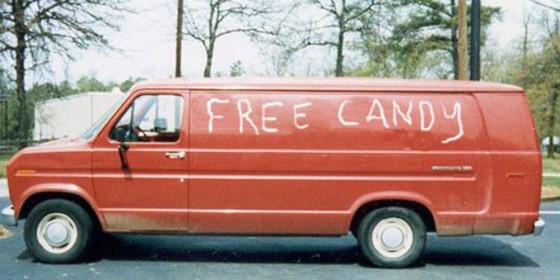 Oh, and just for giggles, the later shots of her calling him on his cell-phone from the trunk weeping and him laughing at her, which hit new depths of “who the hell thought this was funny?”  Oh, there are also repeated shots of Aniston in handcuffs, too, either screaming or looking like she’s trying to hump Butler.  We get the impression the dirty-raincoat crowd is going to turn out by the score for this movie.

But quickly it’s revealed that this is not, in fact, a screenplay by one of those sad women who wrote Ted Bundy fan letters, but instead a script from the ‘80s some executive found being used to keep his desk from wobbling.  After brushing off the dust and coke residue, he realized it was written for Mel Gibson in 1985, but since Gibson is crazy and hates Jews publicly now, he went with Butler and cast Jennifer Aniston as the disposable love interest because we guess Aniston still has some sort of star power, even after all those shitty movies she’s been in, especially that one where she humped the guy who had humped both her mom and her grandmother. 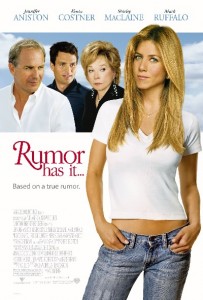 In this movie, Kevin Costner has sex with everyone on this poster. Yes, including himself.

The plot is that Butler is the bounty hunter and Aniston is his ex-wife, a journalist on the trail of a major coke ring who has jumped bail.  So she’s desperately trying to escape, as her idiot ex-husband is utterly oblivious to any attempts to kill her, and he’s trying to bring her in for the rich bounty.  Oh, mechanical and flagrantly engineered conflict with no basis in human emotion or comic potential whatsoever!

Which brings us to the third source of pain: whenever this trailer isn’t making Butler look like a rapist/serial killer, it’s almost painfully unfunny.

Seriously, do we need to see yet another guy run through a driving range and get beaned with golf balls?  Didn’t Ernest do that, back in the ‘80s?  Was it even funny then?  Similarly, can we retire the sniping ex-couple-that-will-inevitably-become-a-couple-again?  Hollywood seems utterly oblivious to the idea that people break up for a reason. 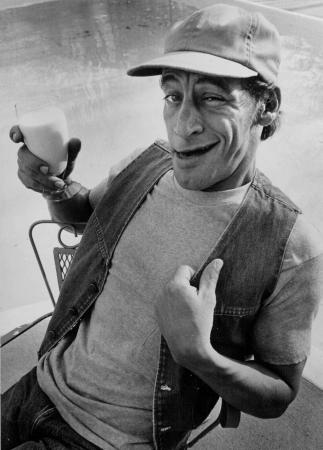 Like waking up one day and realizing you're fucking a mascot for milk.

The trailer closes with probably a pure distillation of hate: Aniston pulling a taser out of what the trailer seems to be implying is her hoo-ha, and then zapping Gerard Butler in the neck with it, allowing him to mug in a horribly unfunny way.

Jesus, Hollywood, if you’re going to make an actor mug while pretending to be zapped by a vagina taser, you can at least have the actress fire the darts from her holy of holies.  In fact, Jennifer Aniston’s “Vagina Taser” is a movie we’d pay to see.  We don’t even need nudity.  Aniston spreading her legs in a V and firing sparking electric pain from her groin is more than enough.