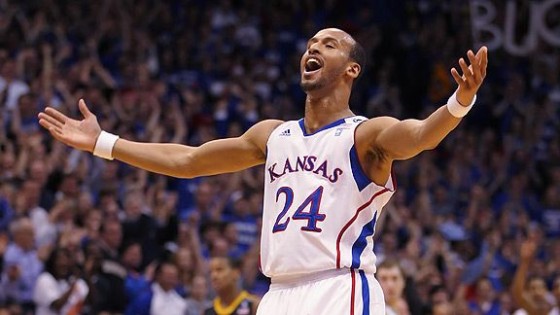 A lot of things will have to go the Jayhawks way if they’re going to defeat mighty Kentucky in tonight’s highly anticipated National Title showdown. Like limiting the damage inflicted by Terrence Jones and Anthony Davis, controlling the glass, hitting open three-point shots and staying out of foul trouble.

But the most important piece to a Kansas championship puzzle might be one player, and not the one you’re probably thinking of either. All eyes will be on stud forward Thomas Robinson, this much we know. However, junior swingman Travis Releford must deliver the goods as well for Rock Chalk to cut down the nets.

Releford is only the fifth-leading scorer on the team, but the better he plays in big games, the better Kansas plays. He was phenomenal in the semifinals win versus Ohio State when he totaled 15 points, six rebounds, two steals and zero turnovers. This was a far cry from how he looked in the November 15th loss to Kentucky at Madison Square Garden. On that night, he scored four points on 2-6 shooting and committed five turnovers.

Reviewing his numbers in Kansas’s other five losses is quite telling:

Again, Releford is not an elite offensive scorer, but the team is 16-1 when he does hit double-digits.

Against Kentucky’s young, athletic and supremely skilled starting five, everyone in the Jawhawks thin rotation must contribute on both ends of the floor. The ‘Cats shot an impressive 51% in the first meeting, so contesting shots and eliminating second-chance baskets will be critical to securing a second championship in five years for Bill Self’s bunch.

Enough armchair analysis. Get ready for what should be a doozy of a matchup. That is If Travis Releford shows up.