A Tribute to Seinfeld’s Bob Sacamano 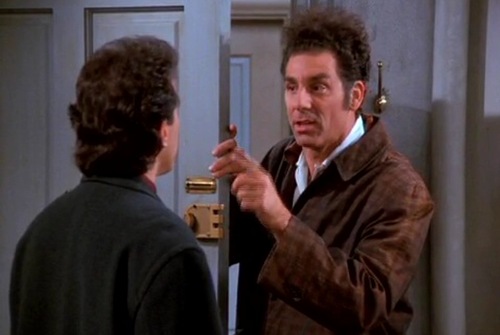 You know my friend Bob Sacamano?

One of television’s greatest minor characters, Seinfeld‘s Bob Sacamano created a legend for himself all while never appearing on screen.

As one of Kramer’s best friends we already know that this must be one truly unique individual. When you add in the fact that the only information we as the viewer ever receive about him comes through stories Kramer weaves, well then you’re just dealing with something special – and television gold.

From a botched hernia operation to a supplier of defective condoms, it’s tough to believe that Bob Sacamano is actually based on a real person, albeit loosely at best. Sacamano was created by writer Larry Charles who actually named the eccentric character after one of his friends. Needless to say, the two had a falling out following the real friend learning of his name being used on screen.

We first learn of Bob Sacamano through his unfortunate botched operation, as hilariously described by Kramer in season two’s “The Heart Attack.” That one moment paved the way for numerous references during the show’s run, the majority being told through Kramer. However, Jerry does become friends with Sacamano in season eight’s episode “The Chicken Roaster,” when he temporarily moves into Kramer’s apartment.

Consider the character of Sacamano and compare it to modern television. Seinfeld was brilliant – so brilliant in fact that some of the humor is only becoming better and more funny with age. Consider that this show was able to make a minor character, that we never even see, one of the funniest running jokes. Even better, the series was able to duplicate this  not just with Sacamano, but also with a few other minor characters, such as Jerry’s cousin Jeffrey and Kramer’s other friend, Lomez. Few shows can equal that, especially today’s offerings that insist on being blunt and direct with their humor (excluding the hilarious and short-lived Arrested Development).

Now, enjoy a brief compilation about one of the best minor characters in television history: Bob Sacamano.

Did I tell you about my friend Bob Sacamano?