A Tribute to Luca Brasi 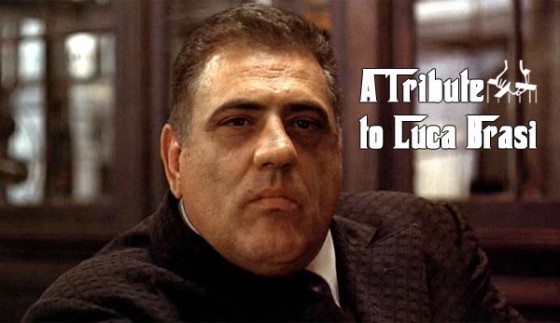 There are men in this world who go about demanding to be killed. They argue in gambling games; they jump out of their cars in a rage if someone so much as scratches their fender. These people wander through the streets calling out “Kill me, kill me.” Luca Brasi was such a man. And since he wasn’t scared of death, and in fact, looked for it… I made him my weapon. Because I was the only person in the world that he truly hoped would not kill him.”―Vito Corleone

Luca Brasi is one of Don Vito Corleone’s personal enforcers in Mario Puzo’s The Godfather, and played by 6-foot-6, 320-pound Lenny Montana in Francis Ford Coppola’s 1972 Oscar-winning film. Montana was a professional wrestler, was also an associate of the Colombo Family in the 1960’s, and had served prison time. He died of a heart attack in 1992.

Brasi is portrayed as slow-witted in the film. This is mainly due to the casting of Montana, because he was so nervous that he kept practicing his lines over and over again. Francis Ford Coppola wrote this into the script. Montana was also nervous during the scene where his character thanked the Don; Coppola also wrote this into the script. That’s how movie magic is made.

There is a bit more Luca dialogue in the film, but just small talk in Italian.

More on Brasi From the Book 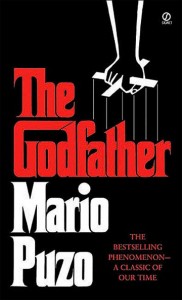 The Death of Brasi

Brasi is the first to die in the film, and it is quite a memorable scene. Vito Corleone instructs Brasi to ‘feel out’ rival mobster Virgil Sollozzo. But Sollozzo and his henchmen aren’t fooled. He jabs a knife in Brasi’s hand, and does this: 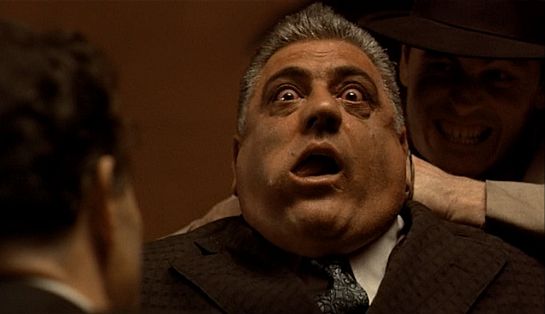 We’ve already seen the film, so let’s watch the animated version from the game:

There are also funny versions of this:

That’s not the last we hear of Luca Brasi, however. More classic dialogue is to come. 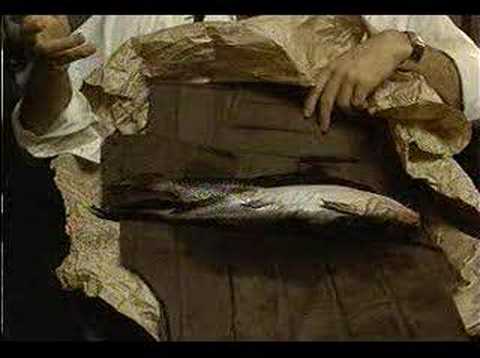 [Tessio brings in Luca Brasi’s bulletproof vest, delivered with a fish inside]
Sonny: What the hell is this?
Clemenza: It’s a Sicilian message. It means Luca Brasi sleeps with the fishes.

There are two songs I found on Amazon about Luca Brasi, one called “Luca Brasi” by Urban Verbs, and the other called Like Luca Brasi by Tea Cozies. 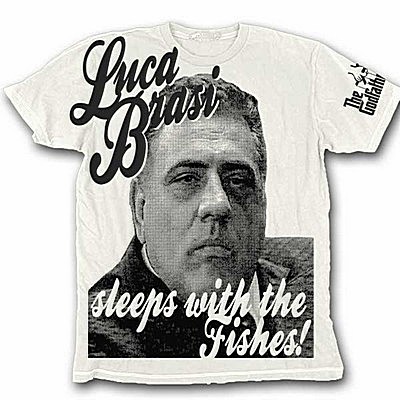 A Luca Brasi shirt is available at SlingShotShirts.com. I can’t imagine anyone who wants this shirt will buy anything other than double extra large, which costs an extra dollar. 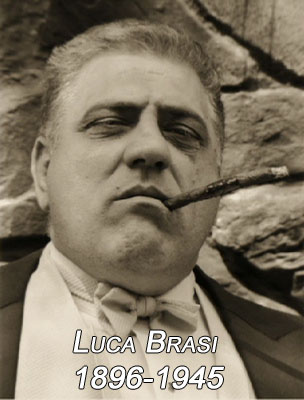