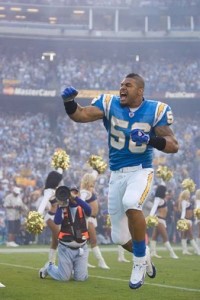 Yesterday we cracked open the San Diego Union-Tribune and saw the headline, “Merriman may rest injured groin through bye week.” The leader of the Chargers defense is apparently taking the next couple of weeks off for some rest and relaxation. Although come to think of it, since Merriman has only made six tackles through the first three games of the season, a lot of fans probably think he has gotten enough R & R already.

Instead of practicing this week and traveling with the team to Pittsburgh, Merriman has had plenty of time to Twitter. Here are just a few tweets that Lights Out has received on his Twitter account during the past 24 hours:

@KimKardashian – All you need is 15 minutes inside my bootylicious tush and your groin will be just fine. :-) LOL

@sportsguy33 – You’re a feckin’ los-ah Merriman. Just sit on your couch and watch the Patriots. They are wicked good and you suck

@terrellowens – Str8 up Lights Out, you gotta stop taking roids. I know u hv a mind of ur own tho. Get better soon!

@dwadeofficial – Sorry ur injured homie. More time for 3somes & sex parties tho! C you at your crib this weekend.