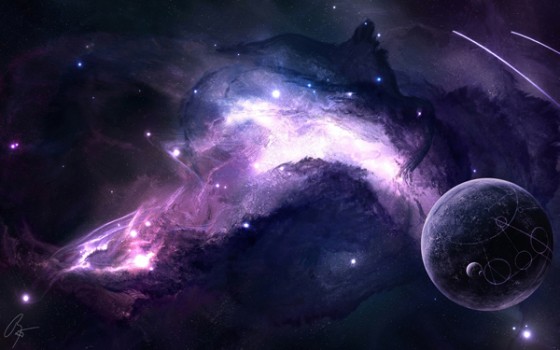 Space: The Final Frontier. Or at least it used to be when NASA was relevant. Now it seems more like a pipe dream. Weren’t we supposed to have flying cars and colonies on the moon by 2011? Oh well. We still have space music to fall back on. And by space music, I mean songs with “space” in the title. They’re like totally far out, man. So grab your favorite psychedelic drug and kick back with a comfy set of headphones. It’s time to take a trip with a dozen of the chillest space songs in the galaxy.

Space (I Believe In)
The Pixies

This isn’t really about space in a cosmic sense, but it does contain a kinda sorta mathematical formula in the lyrics. Plus, it’s The Pixies. Everything they do is chill. This track screams early ’90s alternative.

I was first introduced to The Beta Band in the movie High Fidelity when John Cusack’s character plays them in his record store. They never really achieved mainstream success, but they did write some trippy tunes like “Space Beatle.”

Out of Space
The Prodigy

I’ll take your brain to another dimension. That line pretty much describes this track to a tee. It’s electronic trance, so a space theme seems appropriate.

Ash exploded across the UK in the ’90s with their unique Britpop/punk sound. Four Top 10 albums and over 50 singles earned these Northern Ireland lads a sterling reputation for crafting catchy hits, such as the very addictive “Space Shot.”

It’s time to turn up the volume on this otherwise sedated playlist. Call up Jay and Silent Bob, light a spliff and enjoy the hardcore riffs of Red Bank, New Jersey’s own, Monster Magnet.

From a “Space Lord” to a “Space Monkey.” Weird transition, but you should be plenty high by now, so what the hell. Brian Molko’s eclectic vocals have never sounded more anguished. Placebo means harmless drug – how ironic.

Lord, Monkey, Boy? I’m sensing a pattern here. An odd pattern but a pattern nonetheless. Siamese Dream is one of the ’90s’ greatest albums due to soulful offerings like “Spaceboy,” an apparent tribute to Billy Corgan’s half-brother, Jesse.

Ladies and Gentleman We Are Floating in Space
Spiritualized

It’s like totally ethereal, dude. Like I’m sleeping on a cloud above a sea of bliss. Any list of spacey songs must include Spiritualized. I mean, the lead singer goes by the moniker of J. Spaceman for Pete’s sake. Case closed.

I know what you’re thinking — what the fu*k is Wang Chung doing on here? Well, fans of The Walking Dead should be familiar with this awesome track because it played over the final scene of the very first episode. By the way, if you’re not watching The Walking Dead, get to it.

I don’t care one iota about their politics. Muse are skilled practitioners in the art of music. They combine the best parts of Radiohead, Pink Floyd and Oasis to form a powerful brand of alt rock fueled by equal parts love and hate.

Okay, if you haven’t downed a couple of shrooms yet, do so now. Listening to Mogwai is like surfing on Jim Morrison’s cerebral cortex while he was writing “The End.” It’s impossible to summarize their compositions in one word, but I’ll try. Melodic.

If The Foo Fighters are the best rock ‘n’ roll band workin’ today then I’d say The Killers aren’t far behind. Their brash, energetic style melds edge with glamour. Similar to the town they call home, Las Vegas.