12 Comic Book Covers That Prove The Avengers Were Ridiculous

Thanks to the recent films starring The Avengers, many people assume they have always been a bunch of ass-kicking heroes fighting sweet-ass enemies who all spout epic one-liners and get the damn job done. These people couldn’t be more wrong. In fact, more often than not — like when all the good bad guys were busy wreaking havoc elsewhere — The Avengers were reduced to smacking third-rate ne’er-do-well’s on their collective wrists. And, if all that mess wasn’t bad enough, sometimes they just did really silly and borderline insane stuff just because they could. And if you want proof, here are a dozen covers (actual covers I might add) where our titular heroes are engaged in some seriously wacky shit.

Headlok Wants You Off His Lawn 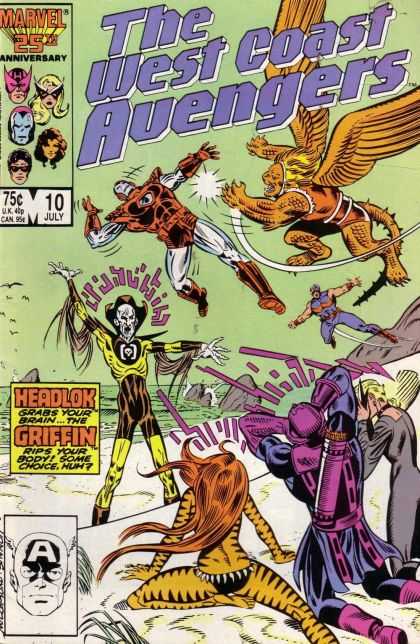 Looks like grandpa got lost coming home from the costume party. Again.

I don't want to rush judgement on an obviously senile senior citizen named Headlok who looks like he moonlights as a horror freak from a circus Terror Tunnel, but I'm going to. When the heroes can readily see your decrepit rib cage through your Popsicle-colored singlet, I don't think it makes any difference what kind of hoodoo you're spouting, they're definitely all gonna laugh at you. Even Griffin was stuck in such fits of hilarity he had to smack Iron Man just to regain some sense of normalcy. Hawkeye giggled so hard he got an ice cream headache.

Beast-iality? Oh I think So 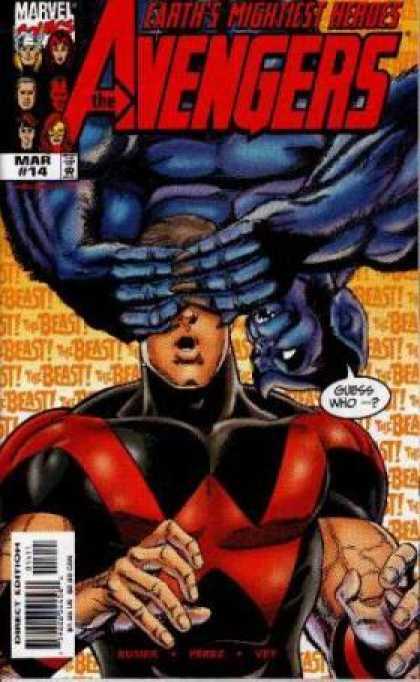 The Beast is probably going to fuck you, Wonder-Man.

I have no idea what "core audience" Marvel was going for with this cover. The minor group of people who are into superhero bestiality? Maybe the scant few who get off picturing Hank McCoy pawing at their junk while they read comics about him? Homosexual Furries? I really have no idea. But I think the point is made abundantly clear: The Beast wants to be naked and sweaty with Wonder-Man. Now. 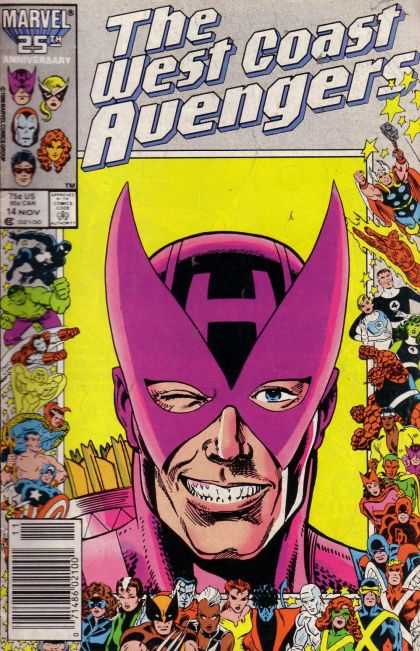 Hawkeye just shit his costume. Shit it like you read about.

*sniff sniff* What the hell is that? Dude! Clint... did you just...? You did! You sick fuck! Man, you need to go wipe or something! That is a messy booty you have there, my friend! And it's all up in your costume! *sniff sniff* Good Lord, it smells like you literally ate the shit you made just after you ate Vietnamese food. Get the hell out of here!

The Captain in M.C. Escher Land 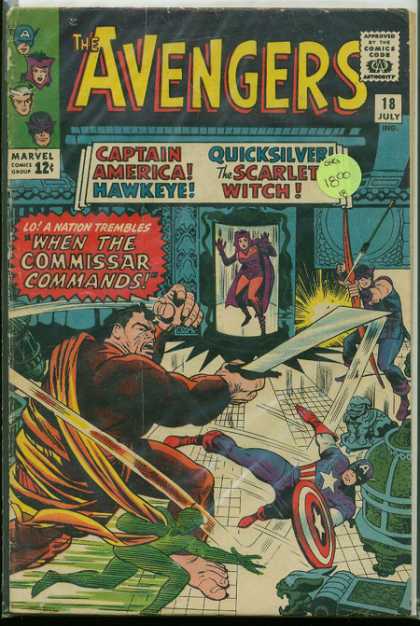 Even the master, Jack Kirby, had his off days.

Far be it from me to question the bizarre motives of one Jack Kirby and his astounding artwork, but this is just... not good. Not even a little bit good. I mean, it all flows askew even without the fact that Captain America looks like he was slapped on the page out of a Color Forms set. The Commissar is hideously disproportionate, almost on the size scale of The Hulk, and is that The Human Torch running away with his scarf? There is nothing happening on this cover that should be happening anywhere, ever. 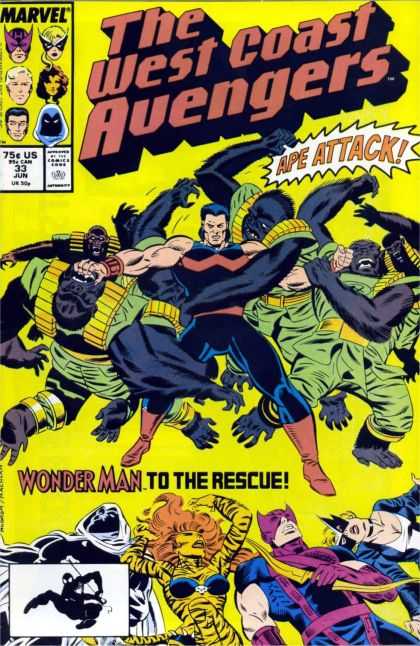 Strangely, not ONE of The Avengers was worth a damn against a bunch of monkeys.

So let's run down what we can expect from a monkey threat: thrown poop and, probably, a bunch of shitty banana peels all over the place. And none of those things should even remotely slow down a SUPERHERO TEAM. But look at what's going on here: Moon Knight, That Cat Chick, Hawkeye, and that Bird Lady are all completely unconscious. I don't know, maybe they all stayed up really late the previous night swimming back Jager Bombs and they're just sleeping off the woozies. That makes about as much sense as fully armored gorillas wearing pants. 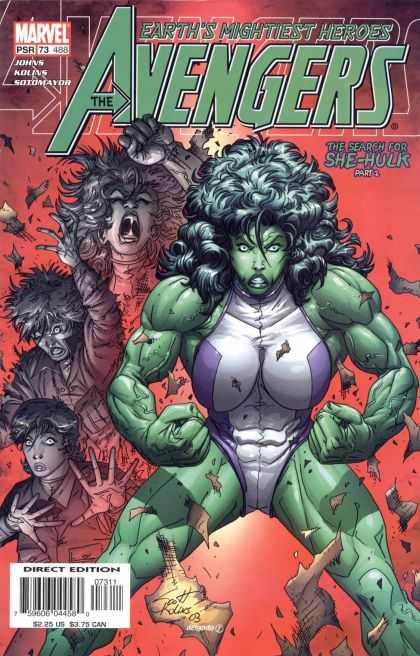 Look, I understand the concept of this cover is Jennifer's emotional transformation into the monstrous She-Hulk, but that doesn't help answer any of the obvious and glaring questions it presents. First of all, apparently she has to wear her Shulkie (and yes, they've called her that) costume under her clothes and it doesn't shred or fall to pieces like her other clothes. I guess I can buy that, considering many superhero outfits have outlandish properties. But what about her boobs? Do you see those things? It's not like they're hidden or anything; they are literally front and center and they are absolutely ridiculous. Even as far as comic book lady's cans go, She-Hulk's are beyond the realm of stupidity. Boobies...

I Don’t Have a Clue What’s Going On… 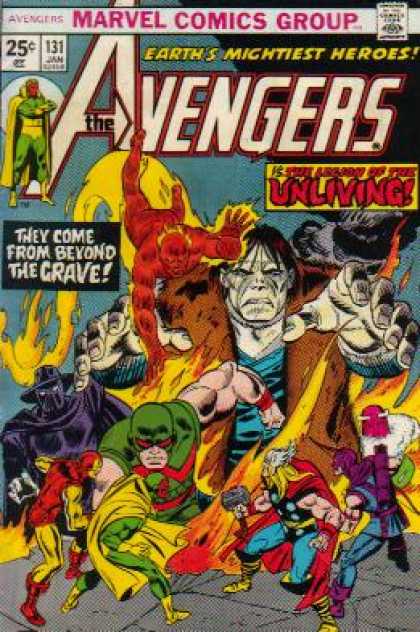 Your dead friends are really not very good friends.

It took me a second to figure out what's happening here, but I think I understand it now. Giant Frankenstein is throwing Human Torch at The Avengers probably because he wants to set them all on fire. As for Goliath, Baron What's-His-Face, and Darker Moon Knight in a Fedora, they look agitated and pissed and I think it's because they didn't get a turn at throwing Human Torch. It does look like fun. 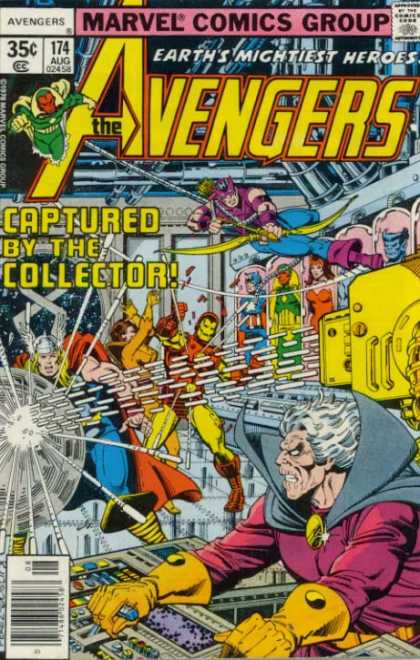 The old fart in his '70s-collared cape has quite obviously invented a space gun that shoots a variety of delicious candy. Thor has decided that the old guy has the Lem 'N Mel setting turned up far too high, and is deflecting the tasty confection with his hammer so all of his Avengers friends can share. What a wonderful birthday party for Iron Man who cheers on the candy blaster with hearty whoops and hollers. Yay!

Look! Stuff’s Going On Way Over There! 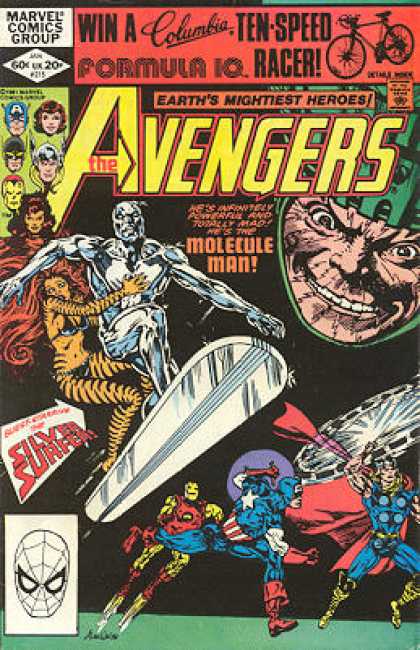 Who gives a shit what's going on here... I want that bike!

Boy I sure wish we could see what was happening just to the right of the cover, because whatever it is must be pretty epic judging by the way Cap's running. He looks like he's about to rip an Achilles Tendon doing... whatever he calls that particular type of sprint. And speaking of horrible and impossible poses, can Silver Surfer's board be tilted like that and still have people on it? Their ankles must be completely snapped at this point.

The Top Ten Reasons Why This Sucks 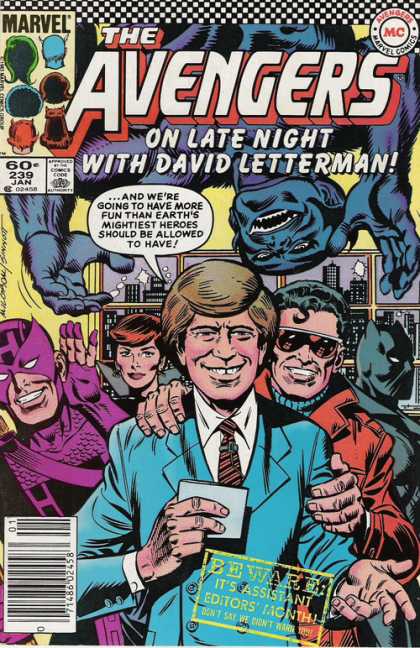 Beast is never not upside down.

No, this is not a MAD Magazine cover and yes, I'm serious as much as I understand how much it actually looks like one. For some reason, Marvel likes to make its heroes do incredibly inane bullshit like visiting talk shows (this cover) or posing for stuff like People Magazine (see several Fantastic Four issues). Apparently they think it's cute assuming that the reading audience might find it funny that superheroes are "just like regular people." Well we don't, so knock it off. We want our Wolverines and Hulks as ridiculously unrealistic as possible, damn it! 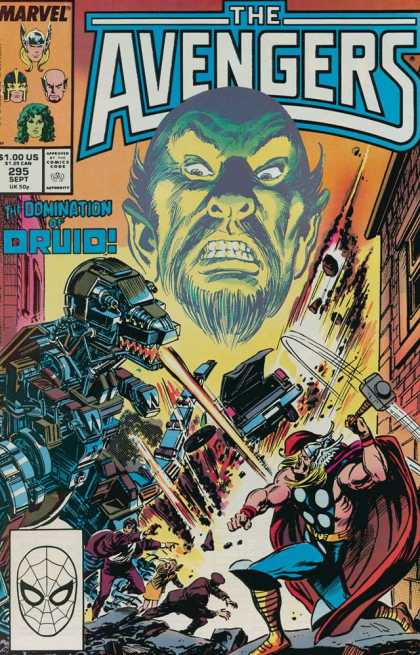 I had to look up this Druid character just to verify how awesomely lame he is, and here's what I dug up: his actual last name is Druid (seriously), and he's dead. That's about it. What it doesn't cover is how he was able to use and control a Dinobot. Although as dense as Grimlock is, it would only take the promise of a few cookies and a Barney DVD.

His Fingers Have Seen Things, Man… 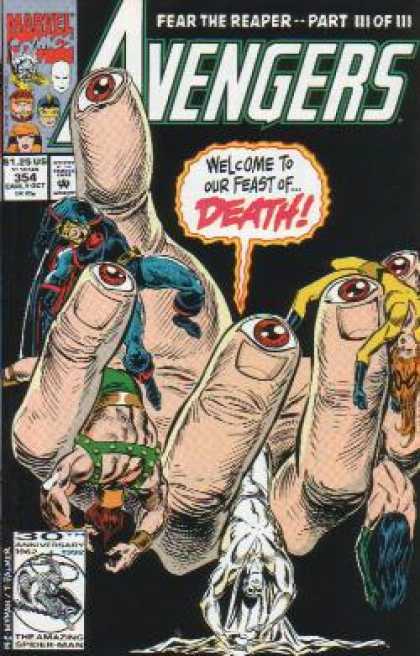 This was the time when just about any hero who could actively put his or her costume on correctly could join the Avengers roster. Seriously, have you seen the list of Marvel superheroes who were, or are, members of the team? I think it's literally everyone ever. So it makes sense that Hercules, and Black Knight, and Lady Yellowsuit, and that chick not wearing a top (boobies!) were Avengers. Everyone else must have been sick or visiting their parents. And whatever a Feast of Death is sounds unappetizing. Especially when Dr. Fingereyes has his hands all over everything.