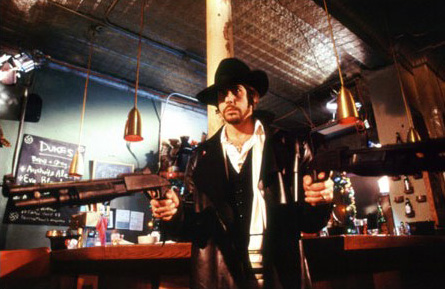 This one goes out to my Jewish friends, Yitzchak, Moshe and Chava. May your matzah balls be extra light and fluffy this Hanukkah. Due to the rampant anti-Semitism plaguing Hollywood (huh?), there are very few badass action heroes of the Jewish persuasion. For some reason, Shlomo Schatzberg the rogue CPA who wages war on unfair tax codes never took off as a movie franchise. Weird.

That’s where The Hebrew Hammer comes in. The titular character, played by Adam Goldberg, uses his Israeli Defense Forces training to foil Damian Santa’s plot to eliminate all traces of Hanukkah from the December calendar. The filmmakers leave no stereotype unturned in attacking both Jews and Gentiles alike. Like when the Hammer enters a Nazi biker bar. Oy vey! Bonus points for The Crow homage.