Media > Movies > The Twelve Greatest Movies Where Children are Heroes

The Twelve Greatest Movies Where Children are Heroes 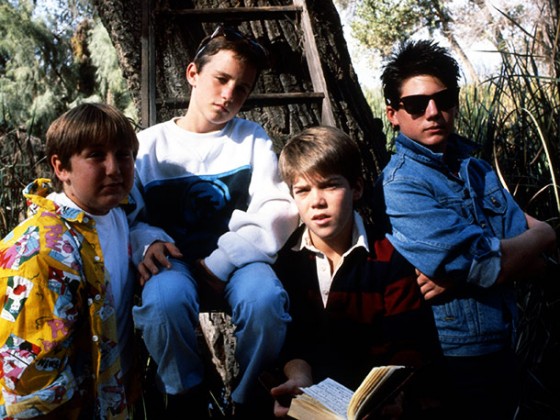 Heroic adventures featuring stalwart men and roaring women are literally a dime a dozen. In fact, check out the rundown of movies available at your local theater right now and three-quarters of them showcase that all-too-familiar plot structure of that famous guy or lady winning the day and rescuing something or someone from the clutches of evil. But what about the children? Well now, there’s something that’s not quite as overdone. Especially if it’s only children who spend the majority of the film defying their parents or maybe potentially saving them. Kids are powerful and when used as a group, well, that just makes them even stronger. Take a look at these twelve films where children are the heroes and sometimes there’s not an adult in sight. Let’s also play “Count the Corey Feldman films!”

Bastian and Atreyu are a lot alike. Okay, sure, Bastian Bux lives on Earth and is relentlessly tormented by bullies and likes to hole himself up in the school’s attic and get way too involved in a work of fiction that might, somehow, involve him. And the other kid, Atreyu, is a heroic, albeit naive and innocent warrior who must do all he can to thwart “The Nothing,” save the Childlike Empress, and restore peace to Fantasia all in a matter of days. But other than that, they’re exactly alike.

What happens when a felled tree opens a pit to the very bowels of Hell itself? Well, you get two naive kids who inadvertently summon a bunch of demons and spirits, what else? Fortunately one of theses kids is slightly less guileless and since The Gate that’s been opened sits smack in his backyard, it’s all up to him to send the devilish forces back from whence they came and seal up the hole for good while simultaneously saving his best friend and sister… oh, and his dog. Thank goodness that rocket was handy… am I right?

At this point in the long-lived franchise, Jason has become a mainstay in the lexicon of horror. Granted, he didn’t do any of the killing in Part 1, and did most of it with a burlap sack on his mug in Part 2, he finally gets his iconic mask and soon dispatches his victims as readily as the tides of his own Crystal Lake. Ah, but here we have a twist. You see, Part IV: The Final Chapter was originally supposed to be just that. So when Tommy Jarvis (Corey Feldman) makes himself up to look like a young Voorhees in the end of the flick in order to get his attention, thereby presumably ending Jason’s reign of terror for ever at the hands of Trish, we all assumed (at the time) that the franchise had claimed its last kill. Oh, but ticket receipts speak volumes and we all know there were many more Fridays to follow. But at least we have young Corey to thank for Jason’s first real (post-drowning) death. Too bad Part V sucked so bad.

Does anyone on Earth NOT know of ‘The Boy Who Lived’? Is there some distant barely civilized tribe somewhere in darkest Borneo who has never heard of the young wizard Harry Potter? Somehow, I doubt it. Thanks to J.K. Rowling and her cash-cow child magician, we all know that even the smallest packages can contain the largest amount of power.

Pennywise is back. The town of Derry, Maine has chosen to forget the meddlesome evil that had once plagued it in the guise of a terrifying clown. But he’s returned ad he’s already begun to wreak havoc all over again. But some who still remember also remember a promise they made thirty years previous. In the ’60s, Henry, Bill, Ben, Stan, Eddie, Richie, Beverly and Mike joined forces to defeat the horror and now, in the ’90s, they have to do it again. Sadly, as adults, they might not prove as formidable. But they soon realize that much of their childhood strength can be recovered. Even if it means having to face a giant spider.

Despite the fact that Kevin’s parents are obviously cases for Child Protective Services (I mean who gets left alone for days on end not once, but twice?), it’s still nice to know that the boy has garnered some kind of common sense and survival skills from someone in his family. Without our little hero, his house would have been robbed up and down, and he might have been actually killed when getting stuck in New York City! But not Kevin. Traps, pitfalls, and household items-turned weapons are his playground and he rules his world. It helps a lot that the bad guys are bumbling morons, too.

6) The Chronicles of Narnia

Lucy, Peter, Susan and Edmund discover that their closet contains more than just skeletons and floating loafers. In fact, it contains the doorway to a world called Narnia, and his has been overtaken by the nefarious White Queen. It’s up to the Pevensie children and the animal inhabitants of the world to face the Queen and end her reign. Fortunately, with God on their side… whoops, I mean Astlan (hey, it’s not like it’s a heavily veiled allegory for Christianity, ya know), they have the power of their own faiths and hearts. And eventually they even become rulers themselves! Man, I wish I had a secret world in my wardrobe, but I don’t have a wardrobe.

Ofilia lives with her pregnant, sick mother and her domineering and sadistic military general stepfather during the post-Spanish Civil War in 1944. One day she stumbles upon a fairy and an old Labyrinth which leads her to a Faun, who in turn believes her to be the embodiment of the fallen Princess, Moanna. He then presents her with the ability to prove herself and prove that the essence of her royalty is still pure by giving her three tasks, each of which is more dangerous than the last. Eventually, after many trials and terrors in her own life, by spilling her own blood to protect her infant brother’s, Ofilia finds herself at the rightful throne of her lineage, and evil is lost.

Gordy, Chris, Teddy and Vern are four kids who come from very similar households where each is mistreated and abused for little more than just being different or not being who their respective parents desire. What the four of them need is a reason for everyone to believe that they are someone — local heroes and a quartet who deserve respect. So they embark on a journey to be the first to discover a body rumored to be that of a murdered local. Their quest brings them closer, gives them hope, and reinforces their lacking courage and conviction that each was so desperately missing. Also pointing a gun at Kiefer Sutherland helps a bunch, too.

For some kids, baseball is life. And for the kids of  The Sandlot, their summer on the diamond is about to get a whole lot more interesting. Granted, parts 1 and 2 of this trilogy (Part 3, though consisting of a few original cast members, isn’t very good) are basically the same story, just with different kids. This fact doesn’t make either one any worse than the other, and on their own merits they stand as some of the greatest ‘Kids As Heroes’ movies of all time. Whether you prefer the original and its story of Smalls, his new friends, and the quest for a lost Babe Ruth-signed baseball, or its follow-up where Johnnie and his pals frantically try to retrieve a mis-launched model rocket against the backdrop of more baseball, is entirely up to you. I happen to like both, but I think the music in the sequel is better. Anyway, they are great flicks where the power of childhood is front and center.

Guess what? Dracula’s back, kids, and he isn’t alone! This time he’s brought reinforcements in the forms of a Wolfman, a Mummy, a Gill-Man and Frankenstein’s Monster! Holy crap, now what? Well Sean, Patrick, Rudy and Eugene (The Monster Squad) and Sean’s little sister Phoebe, locate a German tome once owned by Abraham Van Helsing in hopes that its incantation will send the monsters into the void. Fortunately for the Squad, Phoebe befriends Frankenstein’s Monster and he proves to be a true hero as he assists in Drac’s demise as the rest of the kids battle the creatures. In the end, it’s the innocence of a little girl who ultimately outwits evil and wins the day. Oh, and we discover that Wolfman does, indeed, have nards.

The kids of the Goon-Docks are about to be forced out of their home, and unless they can come up with some fast money (and a lot of it) they’re going to have to move. As they pack, a map is discovered in Mikey’s attic and it’s decided that as one last adventure, the Goonies are going to search for One-Eyed Willie’s treasure! Their trail leads them to a rundown restaurant owned by the twisted Fratelli Family, the basement of which contains not only their path to where the treasure might be, but also a monster who may or may not be friendly. The story unfolds as new and exciting things are learned about the gang, the town and the mysterious pirate who went to a world of trouble to hide his booty. A coming-of-age story if there ever was one.