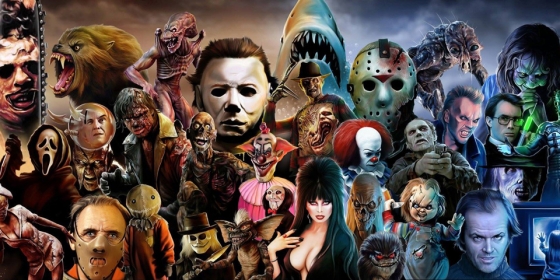 If you’re going to make a horror movie and you’d like it to stick in the craw of audience members who live and breathe horror, you damn well better make it memorable. Sadly, in this modern horror age, films come and go and not too many people can honestly say what they even liked best about something they have just seen. Jump-scares, found-footage, demonic possessions… these all seem to be the rage lately, and each one tends to blend into the last because of overused tropes. However, sometimes all it takes is one polarizing item, one piece of the character you’re supposed to be most afraid of to really leave a lasting impression on your audience forever. Of course I’m referring to the Mask.

Sometimes it’s akin to cheating. If you’re going for the ‘red-herring’ approach to keeping your killer an unknown, nothing aids in that endeavor like a mask. Or, maybe the mask represents that one piece of the murderer’s soul that he can wear on the outside to let his victims know just how he feels. Better yet, it’s a convenience, or maybe even a contrivance. It doesn’t matter in the end. What does matter is that the mask has got to be so incredibly unforgettable that it becomes infamous. Let’s check out a dozen masks that will be etched in our minds as the best horror can offer… so far.

Even though Smiley was just released, it's pretty clear the mask is pretty impressive. Fortunately I'm not going for quality of films, because from what I can gather from both the trailer and the plot synopsis, this looks to be pretty silly. Basically, the website 4chan's message board houses a legend where a killer whose face is the horrific visage you see can be summoned via the net itself after typing in, "It's all about the lulz" three times. Okay, I guess it's not any more ridiculous than anything else... probably. Well, the mask is pretty impressive, anyway. 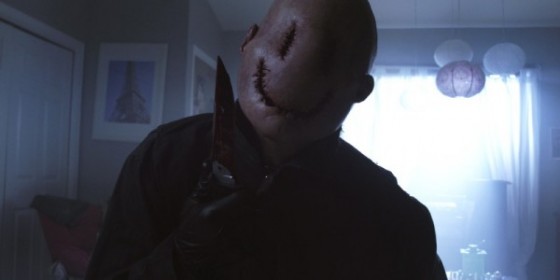 Not the most original of mask ideas (it was first used in a lesser known film from the '0s called Motel Hell), the grimy Pig Mask that Jigsaw and some of his cohorts wears is pretty damn gruesome and quite effective at evoking that raw, unnatural fear we all seem to have. For some reason, seeing humans adorned with full-on animal heads seems to touch a nerve in many of us. Go see Dog Soldiers and check out how they did their version of werewolves and you'll know exactly what I mean: human bodies with giant dog-like heads. Bizarre to the Nth degree. So, take the pig head and toss it on someone wearing a butcher's apron and hand them a weapon... nasty. 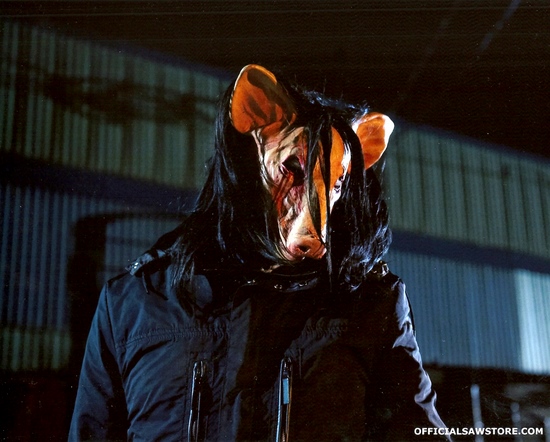 10) Masked Assailants from The Strangers

Sometimes simplicity speaks volumes. In the movie The Strangers, a young couple is vacationing at an isolated cabin (haven't people learned not to do this by now?) when they are suddenly set upon by three masked individuals who proceed to both psychologically and physically torture them. But it's the masks that truly stand out: the women wear relatively simple oriental porcelain doll-type masks with blackened-out eyes, and the guy sports something akin to an empty sack with eyes and mouth holes cut out. They aren't bloody or gross, they just are. Even the "strangers" themselves appear as normal as everyday people. And that's what makes it so unnerving. 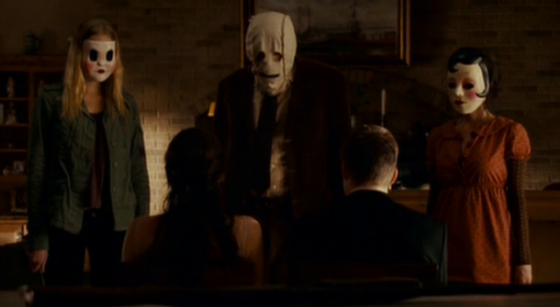 If you haven't seen the ChromeSkull series, it's no real surprise. Sadly, the original 2009 film Laid to Rest wasn't released to many theaters, and was almost immediately sent to the home movie market. This is a shame because as one of the modern slasher flicks, Laid to Rest and it's 2011 sequel ChromeSkull: Laid to Rest 2, are some of the best for amped-up gore and credible storylines. Though relatively similar in plot (except part 2 has more well-known actors and is a bit tighter), the series is notable definitely for its star slasher ChromeSkull, so named because he wears a chrome skull mask. Makes sense. It plays very well with the story and is definitely used in some nasty and vengeful ways, aside from just a murderer's visage. This is definitely a saga true horror fans should check out. 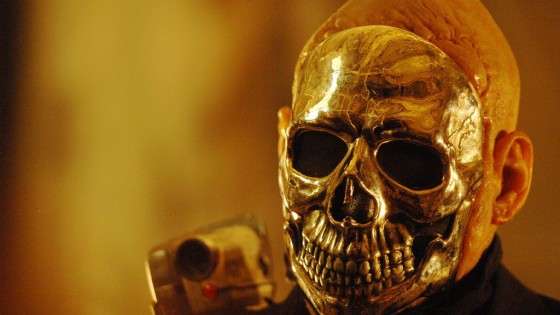 8) The Phantom of the Opera

Relax. I'm talking neither about the exceptional, yet far-from-horror musical, or the atrocious mess starring Gerard Butler. Oh no, what we're talking about here is the original Universal film from 1925 starring Lon Chaney. The story is pretty famous, as it's based on a book by Gaston Leroux, and we all know it features a monstrous ex-performer haunting the bowels of an Opera House. This, the original version, may in fact be the closest to the source material since nearly every redux here after is a musical and is pretty much garbage. The point is the half theater mask with the covered mouth that the Phantom wears to conceal his terrifying features is both a classic and completely unforgettable. 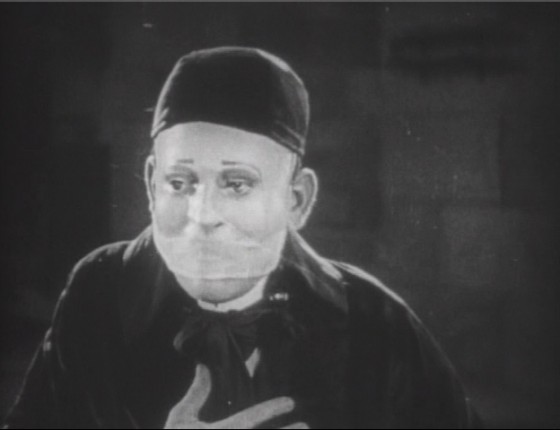 There's something so visceral and horrifying about the unlikely combination of the innocence of infancy and the brutality of a slasher flick, but that's exactly what you get with the Babyface Killer in The Hills Run Red. Granted, this isn't exactly the finest example of how to properly structure a great horror film, but there are some really gruesome kills, so it has that going for it. Oh, and let's not forget the ghastly mask that the killer wears that is a cracked and re-stitched baby doll face that really is unsettling. The story revolves around a group of friends trying to uncover a lost horror movie called The Hills Run Red that was never released due to the fact that the kills in it were real. As with most slasher films, they get a lot more than they bargain for. Up to and including a meeting with Babyface. 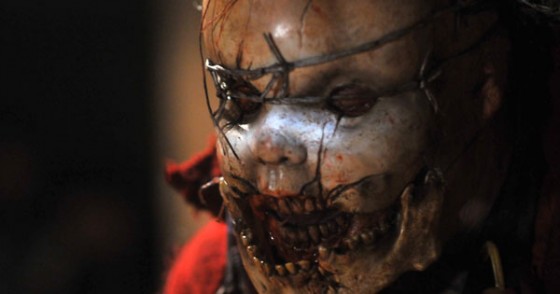 If you haven't seen Clive Barker's Nightbreed, you are really doing yourself a grave disservice. Try to imagine the Cantina scene from Star Wars: A New Hope only with an even deeper air of terror and unease. Because, let's face it, that scene in and of itself is already pretty creepy. Anyway, the Nightbreed themselves are any number of different creatures with various forms of animalistic and monstrous body adjustments including a porcupine lady and a guy who looks like a devilish black goat. But all that aside, the real story revolves around a man and his dreams of Midian where earthly monsters can congregate and live in peace. He realizes he is, himself, a monster, and after rending the flesh from his face to reveal his true form, he finds Midian and befriends the monsters therein. So where's the mask, you ask? Well, horror master David Cronenberg plays Decker, a doctor who is also a murderer. The mask he wears is an unsettling mix of something out of Batman with buttons sewn where the eyes should be and a zippered mouth. It's creepy and the simple fact that it's Cronenberg in a great role makes it all the worse. 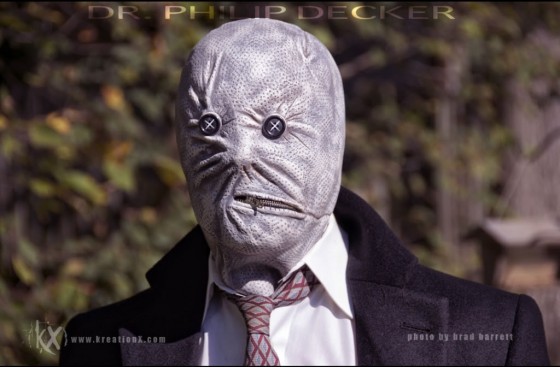 I'm going to go ahead an assume that everyone worth their salt as a movie viewer has seen The Silence of the Lambs. It makes little difference if you're a horror fan or not, this movie is required viewing for anyone who just plain likes good movies. Okay, now that we're past that, we all remember the scene Dr. Lecter is strapped to the wheeled dolly and the lower half of his face is covered with a mask that basically prevents him from eating anyone. That's the mask and it's as iconic as any you might find in a mainstream horror movie. 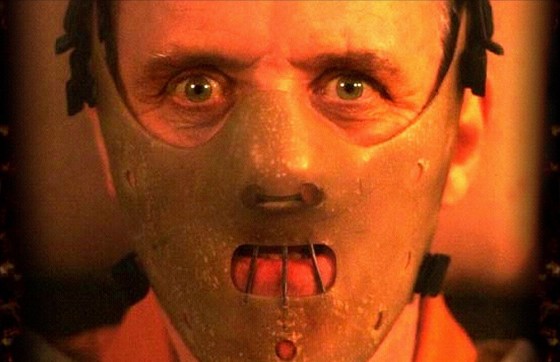 Though this is only the fourth entry on our list, it doesn't mean that Leatherface's sinister stitched-together mess of human faces isn't quite possibly the most disturbing mask of all time. The film, The Texas Chainsaw Massacre, is surprisingly gore-free and really not that splattery of a slasher movie. And that's because it isn't a slasher movie. Yes, it's a horror movie through and through -- gritty Grindhouse and all round filthy -- but it's one of the few that truly uses to perfection the "It's what you DON'T see" axiom to the very fullest. However, what you do see is almost as unsettling and horrifying, especially the mask that the titular killer sports throughout the film. It's obviously the sewn up bits of faces and scalps from his victims, which makes it and him as disturbing as you can imagine. 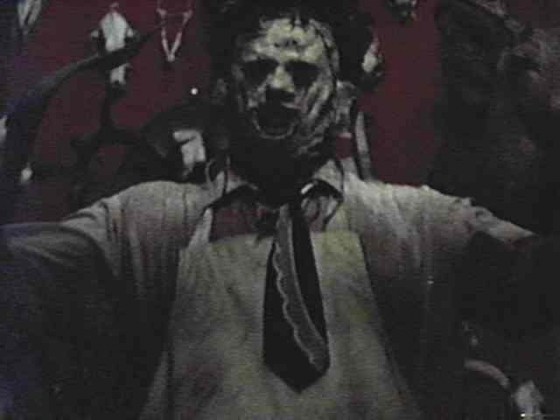 Behind the Mask: The Rise of Leslie Vernon is a movie you might not have heard of if you aren't one to go prodding around in horror movies that don't see the mainstream light of day. And it's a shame if you don't, because that's where you find some of the greatest treasures not cost-effective enough to gain a theatrical release. This movie does the documentary style just a bit differently. A journalist and her camera crew decide to follow around serial killer Leslie Vernon to see just how he does what he does and how he prepares for a 'job'. His mask is just a bit goofy for a split second, as it looks like something just a little too clownish and unimpressive, but when he wears it the scares are only heightened that much more and instantly becomes part of the iconic list of masks. 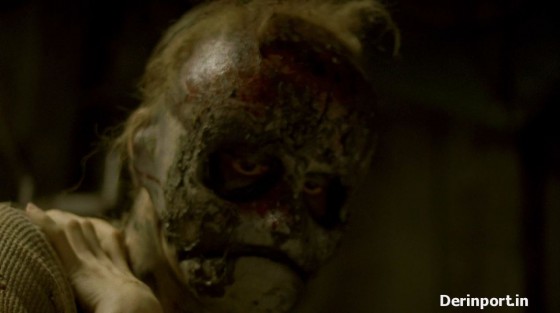 It's truly amazing what a bleached William Shatner Halloween mask with darkened eye holes can do for a horror movie, isn't it? And as classic and iconic horror movie masks go, Michael Myers and his portrayal of the psychopathic killing machine in Halloween will forever stand as one of the greats. Thanks entirely to John Carpenter and his use of pacing and the slow build, Halloween is without a doubt one of the scariest horror movies of all time. In fact, for one of the greatest and most unsettling scenes in film history, one needn't go any further than when Laurie Strode first sees Myers step behind the hedgerow and then disappear after a second glance. It just doubles the weight of how frightening Michael Myers is and his allegorical role as the immorality of misguided youth.

Was there really any other choice? Sure, any one of the top three could have been swapped out for the other, but when one thinks of horror movie masks, I can all but guarantee you that one thinks first of Friday the 13th and Jason Voorhees. If you think about the fact that the most iconic of masks doesn't really make its appearance until the third installment, it really stands out for its permanence to make it so famous. I'll grant you the one-eyed burlap sack in Part 2 was damn creepy, but it was Jason's discovery of the hockey mask that was brought to him (in a way) that really started the whole thing. And from that point forward, we rarely see him without it. And when we do, it's only for a few moments, like when he's buried and resurrected, or when it's knocked off to reveal the decaying zombie beneath. Oh, and just in case you were wondering, the mask itself is a Detroit Red Wings mask molded after the 1950s model. Cool, right?