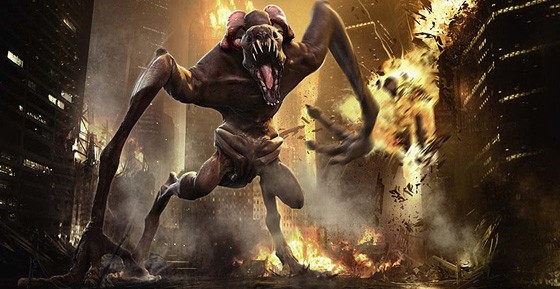 It would be great if all big screen beasties ended up just as terrifying and unique as the creators intended. Alas, not all of them hit the mark. For every Jaws, King Kong, Alien and Godzilla, there are just as many laughable incarnations that don’t quite live up to the hype.

So, what makes a supposed scary creature top the fail scale? It’s all about appearances. A suspect looking abnormality spells t-r-o-u-b-l-e. This ain’t the ’50s anymore. Audiences have a pretty accurate BS detector when it comes to movie monsters. Silly don’t fly no more. Our own Stew listed what he believes are the Sixteen Coolest Movie Monsters. It’s an excellent list. However, I disagree with a couple of his selections. I’ll explain why…

This was meant to be ridiculous. In fact, it’s so laugh-out-loud insane, it has to be included. Golgothan is a monster made entirely of poop. He rises from the toilet and is a minion of the evil muse, Azrael. Leave it Kevin Smith to conjure such a grotesque demon. Kudos to those responsible for manufacturing the crap suit. (Video NSFW)

Not sure what the filmmaking brain trust had in mind with this abomination. Thanks to the Nuclear Regulatory Commission’s dumping of toxic waste in the New York City subways, homeless people are transformed into flesh-eating mutants. The radioactive eyes are supposed to be imposing. Instead, they look like 100 watt light bulbs. At least The Toxic Avenger had personality.

There’s something lurking beneath the Chicago Museum of Natural History. It has the head of a Predator and the body of an alligator. In order to survive, it needs to consume the hypothalamus portion of the brain. Why? It’s not important. Kothoga is ludicrous, but it does have a mad mohawk.

Leave it to the Monty Python crew to bring the famously foolish Jabberwocky to the big screen. A fish head on the body of a dragon. Yikes. You might as well just hold a mirror up to this dopey critter. Once it sees its stupid reflection, it would probably flee in shame. It does know how strip a peasant to the bone. So, it has that going for it.

DeepStar Six is a guilty pleasure. It’s not groundbreaking cinema, but the undersea action is credible. Unfortunately, the absurd muppet-like leviathan is an effing joke. The Director must have known the special effects department screwed the pooch, because you never get a clear view of the beast. It’s got a big mouth and scales, but not much else.

This movie sucks balls. The premise is unsound and the cast is confounding. William Baldwin makes sense, but Donald Sutherland? His payday must have been fat. As for the alien cybernetic creatures, well… they are ill-conceived and just plain idiotic. They were aiming for Terminator, but ended up with Number 5 from Short Circuit on steroids.

This flick had potential. Guillermo del Toro was behind the camera and the beautiful Mira Sorvino was in front of it. The Manhattan sewers never looked better. Too bad the man-sized termites don’t pass the mustard. Anyone with a minimal IQ could tell the difference between a human and a six-foot insect. Just grab a steel fly swatter and a can of Raid. Movie over.

“Full Scream Ahead” was the tagline for this deplorable waste of film. Ugh. The preposterous killer tentacles are half serpent, half Venus Flytrap. Why anyone associated with this stinker thought they would be scary is still a mystery. The Octopi tossed on the ice at Detroit Red Wings hockey games are more frightening.

He’s made of lily pads, mud and algae. Not exactly the ingredients for horror. Yeah, it’s based on a legendary comic book, but the movie incarnation is beyond absurd. However, Adrienne Barbeau’s massive boobies are a welcome distraction in an otherwise awful story.

There’s a flying dinosaur living in the top of the Chrysler Building. Where the hell did it come from? Apparently, an Aztec cult resurrected it. Wow. The movie was made in 1982, but the effects are straight from the 1950s. Hell, the dinos in the Land of the Lost TV series seem genius by comparison.

What the f**k is this? An alien praying mantis that emerged from the ocean? Or a failed attempt by J.J. Abrams to jump-start the movie monster genre? This is what happens when you try too hard to be original. The super secret campaign to guard the identity of the behemoth did nothing but add to the disappointment when the film was released. Just lop off one of its front legs and watch it fall over, helpless.

1. The Sarlacc Pit – Return of the Jedi

That’s right Star Wars geeks, King Lucas is responsible for one of the dumbest monsters ever. It’s a toothy vagina with a penis hidden inside. Hilarious. Lucky for the Sarlacc, Jabba the Hut was around to feed it on occasion, because being confined to the middle of a barren desert would result in starvation and death for most living creatures. How the hell did this asinine creation best Boba Fett? Utterly ridiculous.